A quick note of thanks to the Beatles for inspiring the title for this series of posts. This is the seventeenth in a series of posts written about our trip that will be published four weeks to the day of the trip.

Everyday we like to set out goals. One of my aunts in New Jersey is celebrating her birthday today. So, we decided to head down to Whiting, NJ to visit her and then continue on our way. We’ve decided NOT to go to the South on this trip as the weather reports don’t seem to agree with us. We’re thinking of positioning ourselves to get to Hershey, PA tomorrow and are looking to find ourselves either in Hershey, PA or on the way to Hershey, PA from New Jersey, depending on how today’s familial parts go.

However, before we get there, the goal is to get to Whiting, NJ. 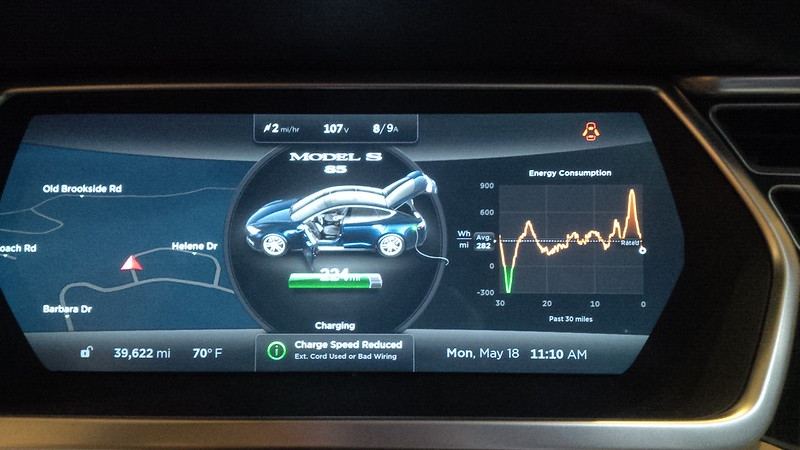 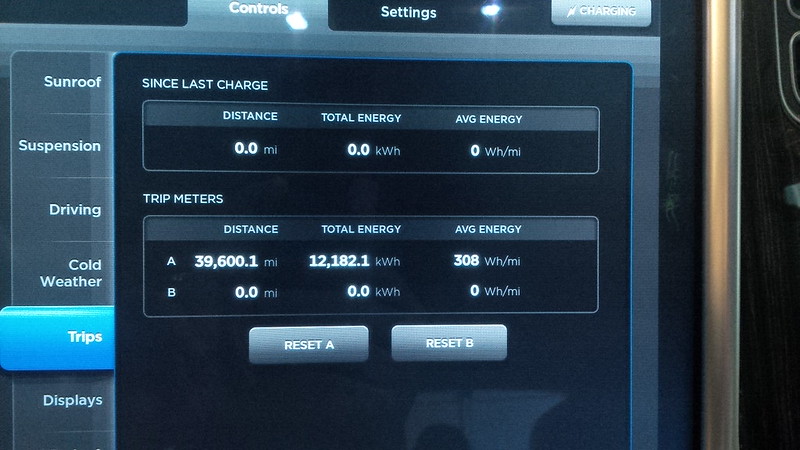 First statistic we check for is to see what we gained by plugging in 110V/8A. Looks like we gained 27 miles overnight. Not bad. Those miles are enough to get us to the Edison Supercharger.

On the way to Edison, NJ. We spotted another Random NJ Model S. It was raining, trying to follow my cousin in his car in a caravan, and I was in unfamiliar territory, so I may not have been as friendly on the road. 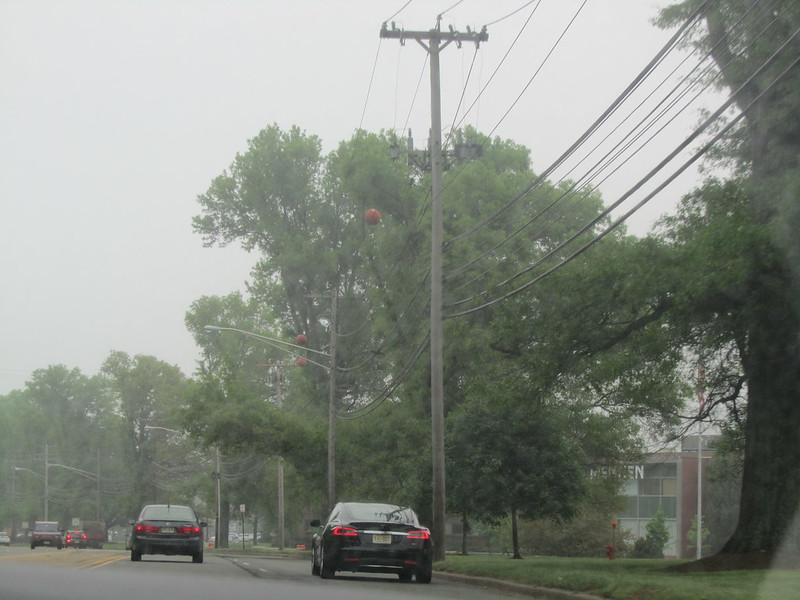 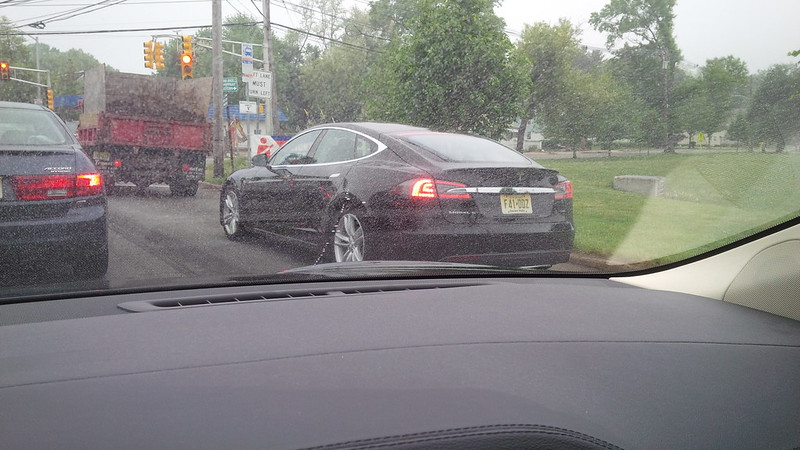 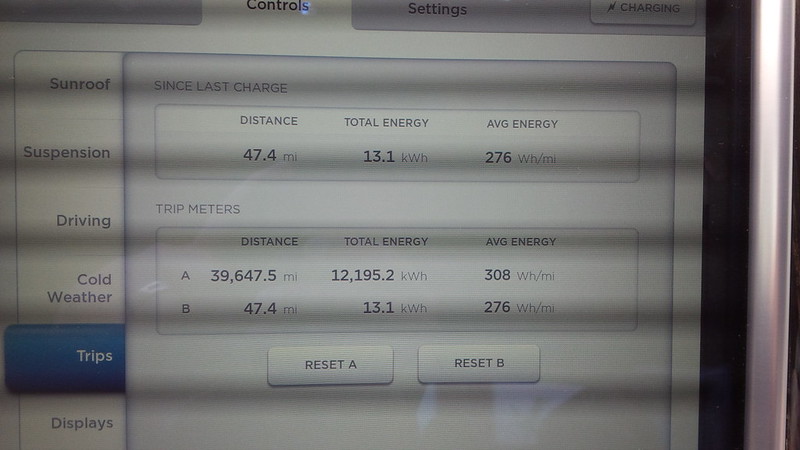 We took the other set of four from the last time we charged. 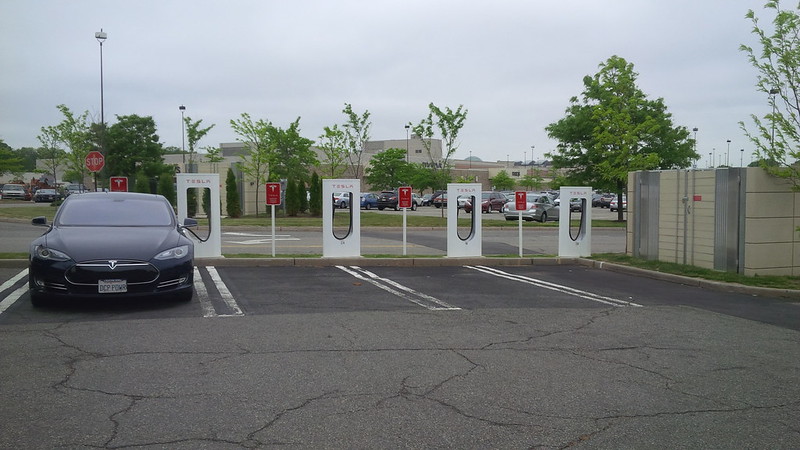 There were already two Model S in the other set and didn’t want to split anyone’s charge. And because I was curious to see if there was a difference in charge speed from this set than the other set. I didn’t perceive a difference. 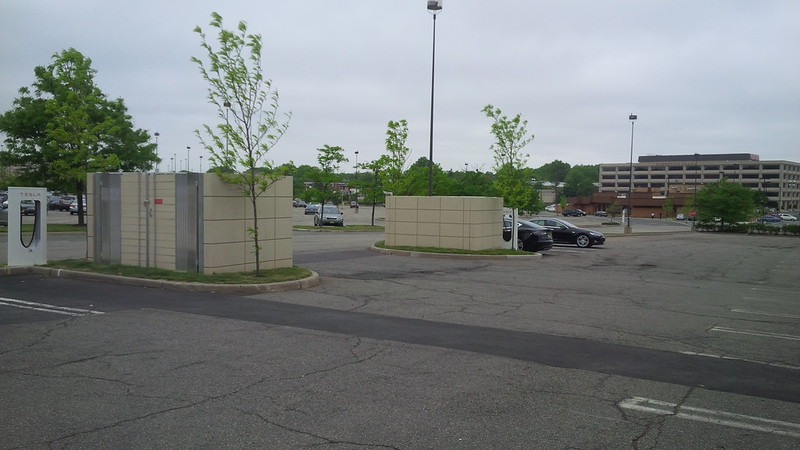 Check out the “alien car” that I caught in the panoramic shot.

We stayed in Edison for a near maximum charge as we know we were going to probably be giving a ride to my uncle and aunt when we get to Whiting and wanted to not have to worry about the charge. The current New Jersey superchargers are all further from the New Jersey shore and Whiting is closer to the shore than the chargers. Considering the fact that New Jersey already has three supercharge locations in the state, it is quite confusing not to have one close to the shore. Atlantic City, Long Beach Island, Tom’s River, those would be good locations for the first shore-side New Jersey supercharger.

Originally, the navigation to Whiting, had us taking the Garden State Parkway, but by the time we were done charging, it changed to route us through the NJ Turnpike. The Turnpike would have allowed us a route through Hamilton Marketplace again for a 30 mile boost, but decided to skip it as we had enough charge to make it to my aunt’s, drive the car around a bit, and then get to Newark, DE and beyond. Besides, we’re now going through some superchargers and areas that we’ve already covered for our entries in the beta of the (now released) Teslarati App for iOS.

So, we headed to Whiting, NJ.

Well, we did it again. I got confused by the exits to get to Whiting from the NJ Turnpike that I ended up having to take the next exit. Now, it’s not as bad as the 15 mile one-way that we experienced in Vermont on the way to Ice Cream (and neither was I distracted by any Bear, Deer, or Moose signs). I think I’ll blame it on jughandle turns.

For those unfamiliar with jughandle turns, aside from the Wikipedia link that I embedded, I’d like to define it.  The jughandle turn is an oddity that seems to exist primarily in New Jersey.  As I understand it, the theory is to take folks that would be making a left or U-turn and force them to make those turns along with traffic that is crossing a highway.

Either way, the exit we were originally meant to exit looked like a rest-stop to me that I ended up bypassing it.  Luckily, we charged enough to do a LOT in Whiting and beyond, and it was no big deal.  Our original route on the NJ Turnpike was supposed to take us 55 miles, so, it looks like we had another 15 mile diversion. 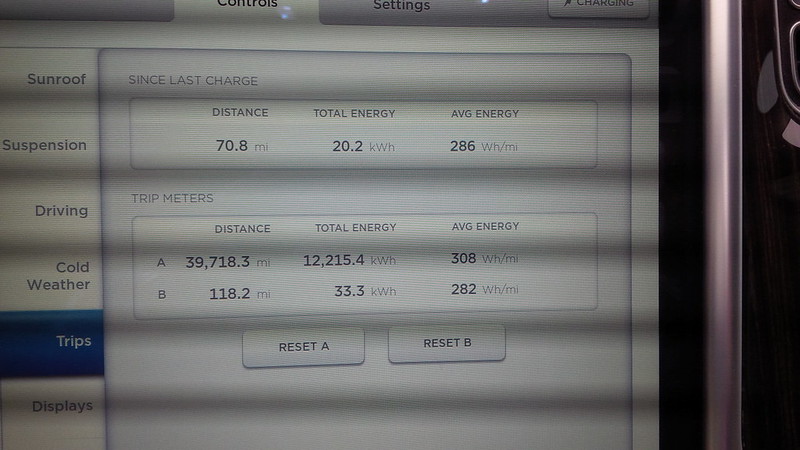 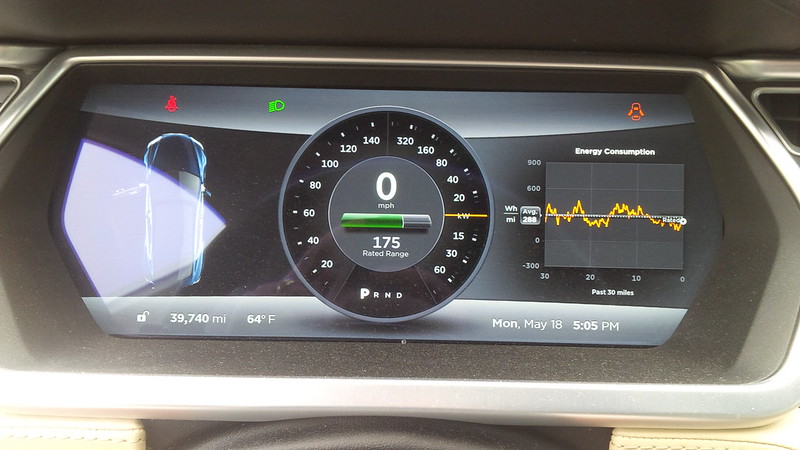 With 175 miles of range left we really didn’t need to charge, but I believe that it was a novelty for my aunt and uncle to see us plug a car into their house. Besides I do like to collect “places that we’ve charged” and it’s even cooler when it’s thousands of miles away from home. 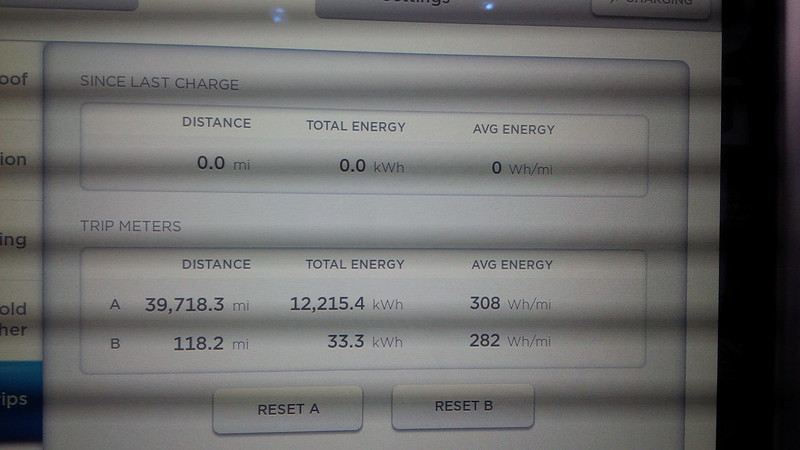 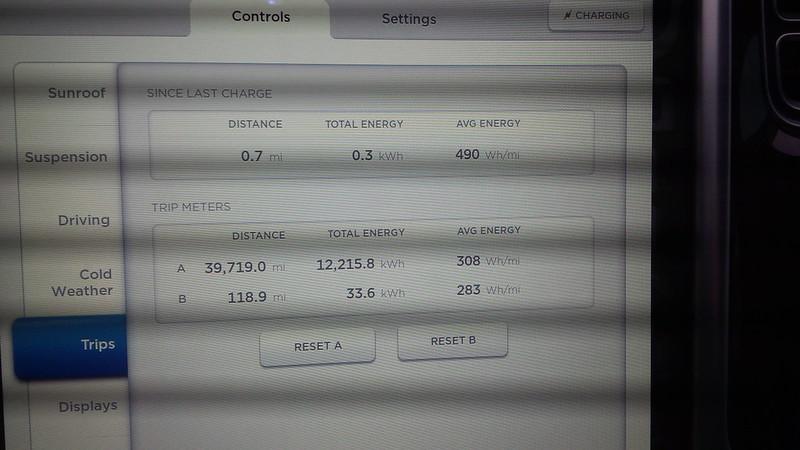 We didn’t really do much driving, we drove around with a few of my cousins, a couple of my aunts and uncles in the Model S. We were able to charge at the full 12A at my aunt and uncle’s house.  While we were visiting, we decided that we would just spend the night at the same hotel in Christiana/Newark, DE as we were impressed with how comfortable that hotel was. 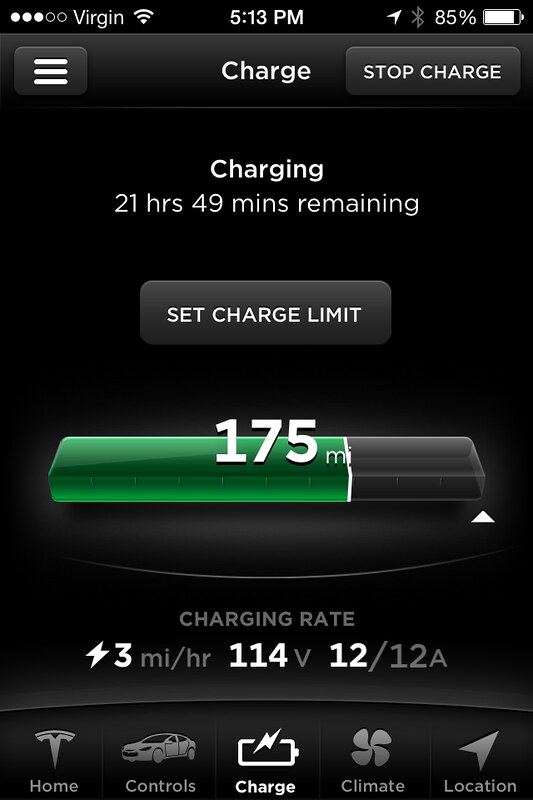 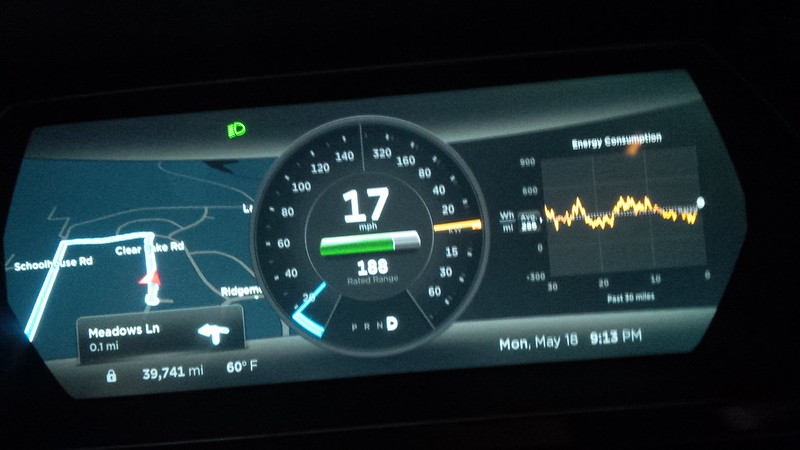 We checked back in to the Hampton Inn and Suites Christiana – Newark.  This was the same hotel that we stayed at on Day 9. 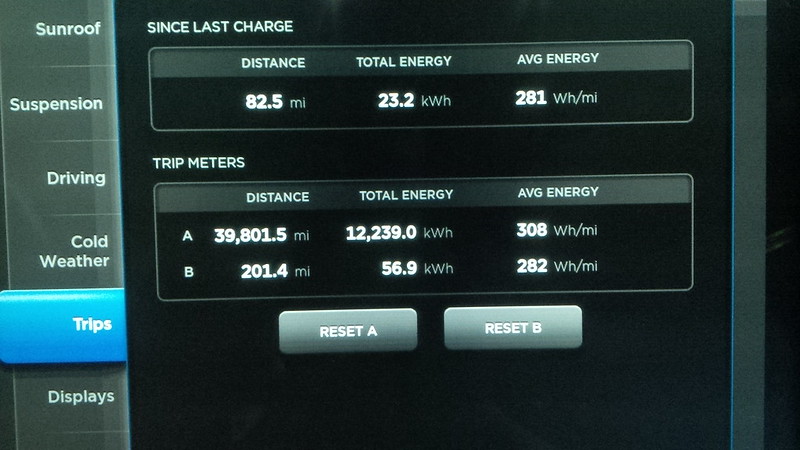 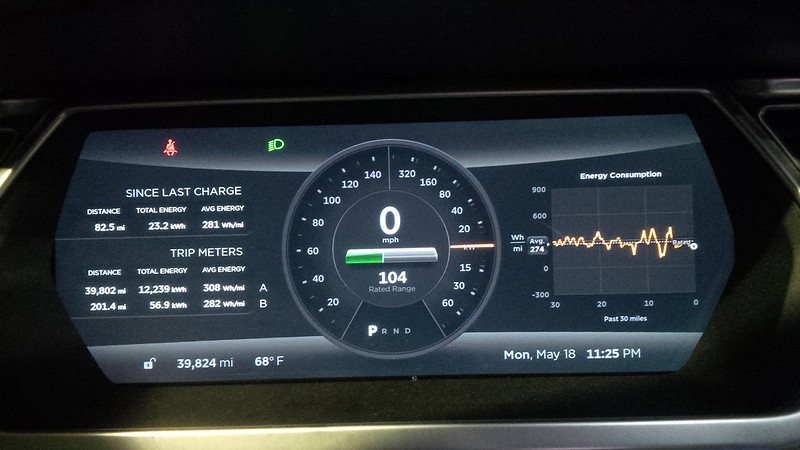 It was raining when we got here and we checked in with 104 Rated Miles on rated range and we know that we’re only three miles to the Newark Supercharger.  Additionally, even if we lost the 10 miles that was the worst vampire loss that we experienced earlier in the trip, we will be fine.

In the parking lot of this Hampton Inn was a fellow Model S traveler, who I found out on TMC’s Random Model S thread was TMC user EdA‘s wife’s Red Model S. 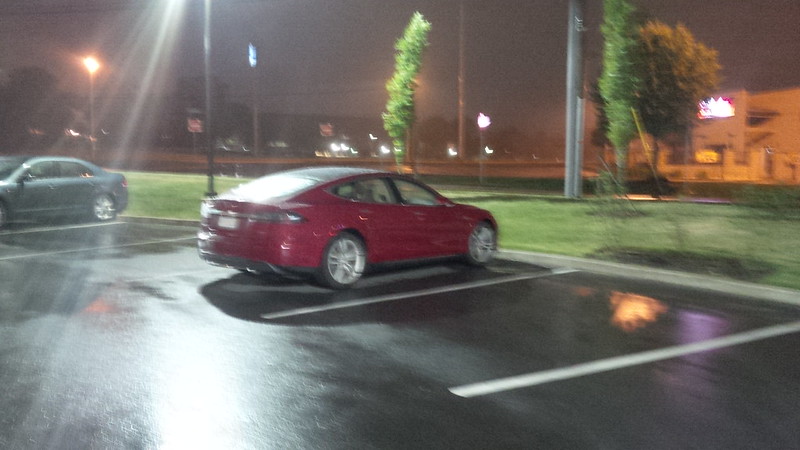 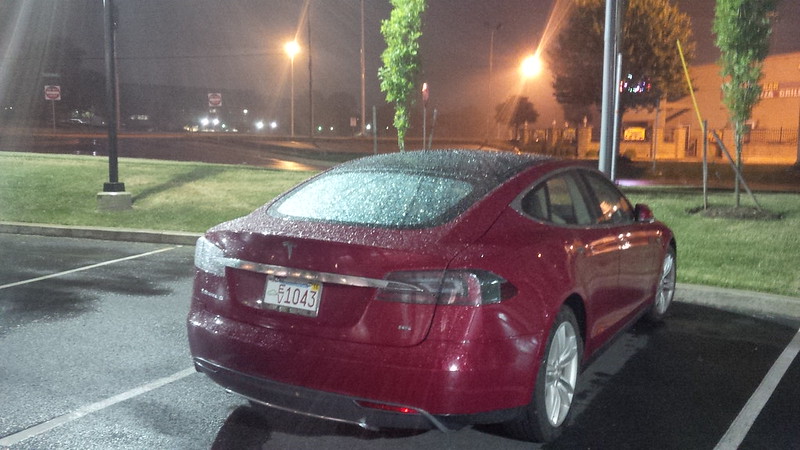 So, a fine few days of Random Model S sightings for us and we made sure to report it on the thread on TMC. Now I had a few goals in mind for this trip, and one of those was to “be” the spotted Model S on that thread. So, as we head West on the return part of our trip, I’m a little disappointed that we have yet to make the Random Model S spotting thread. How often do folks spot a California Model S around here anyway?

Oh well, time for bed, dreaming of Hershey’s Chocolate on the next day’s drive. 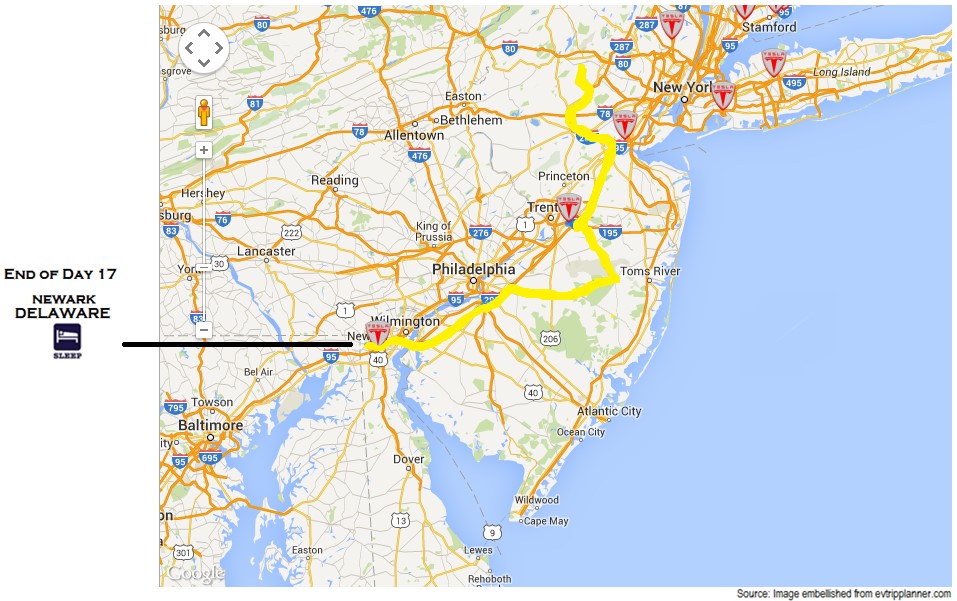