One of the things to consider when making the switch to an Electric Vehicle (EV) is the combination of the battery and electricity IS the fuel that is consumed to power an EV. As such, batteries and range degrade and may eventually need to be replaced. Therefore, one of the questions that these new Model 3 reservation holders ask is “how resilient is the Tesla battery?” or phrased another way, “how long will the battery last?”

The Model 3 announcement did not really cover how different or similar the battery technology in the Model 3 will be from predecessor vehicles from them. The Roadster has a different pack than the Model S and Model X. So, how does one get the comfort of knowing that “Tesla knows what they’re doing with batteries.” I suppose we can just trust them.

Fortunately, that is not our only option. Over the past few years, long-time Electric Vehicle advocate, Plug in America Chief Science Officer, and Tesla Motors Roadster owner Tom Saxton has been conducting several long-term battery studies hosted on the Plug in America site.

For those unfamiliar with Plug in America, they’re the folks that formed out of the advocates that tried to stop the “murder” of the GM EV1 and other Electric Vehicles of that era that was documented in the movie “Who Killed the Electric Car?”  Or, as they describe themselves in their webpage:

Plug In America is a coalition of early adopters. We’re the EV trailblazers – RAV4‐EV drivers, former lessees of Honda EV+, GM EV1, Ford Ranger and Ford Th!nk City electric cars – that passionately advocate for energy independence and clean air. Before 2008, we functioned as a loose network of individuals organized around various websites like dontcrush.com and saveEV1.com. We then coalesced into a chapter of the Electric Auto Association. On January 2, 2008, Plug In America became a separate California non‐profit corporation. On August 18, 2008, we became an official 501(c)(3) public charity!

The battery studies that Tom Saxton have been running for years rely on nearly semi-annual updates from respondents that drive Tesla Roadsters and Tesla Model S as well as the Nissan Leaf and the first generation Toyota RAV4 EV.  In email correspondence with Tom, he has indicated that he is looking to expand the study  in the near future to include the Model X as well.

Tom’s long-term battery study has been invaluable not only to the greater EV community but specifically to Tesla fans as well.  The take rate for participants for the Tesla Roadster study is close to a 7% sample, from what I gather and the Tesla Model S one had a healthy start, but could use more participants.

With the new range numbers from the redesigned front fascia of the vehicle, I am sure I’m not the only one to wonder what the long-term differences would be between a 90D classic fascia vs a 90D new fascia.

Providing a third party study of the effects of long-term battery health enables all concerned with a greater understanding and comfort to know “that Tesla knows what they’re doing.” Furthermore, it gives current non EV drivers a sense of comfort when making the switch to electrically fueled car ownership.

So, if you own a Tesla Roadster and haven’t participated in the study. Or perhaps you’re one of the lucky few to have upgraded to the new 3.0 battery from Tesla, please fill out the Tesla Roadster battery survey.

Perhaps you’re a Model S owner and you’d like to help add to the number of respondents to this study, fill out for the Tesla Model S battery survey.

What has Tom been able to share with the public so far.

Well, for the Roadster, he’s published an entire study three years ago including a paper entitled “Plug in America’s Tesla Roadster Battery Study.” The advent of the 3.0 battery upgrade may require a new study and the addition of almost another three years since the publication of that study might give more information to the study, but that’s entirely up to Tom and his cohorts at PiA.

The Model S Results page is more dynamic than the Roadster results publication.

I have taken screenshots as of April 27, 2016 of a few of the dynamic charts that are provided on the results charts page.

The first chart that caught my eye is the chart on the battery capacity vs. the miles that particular Model S iterations. With new EPA numbers with the launch of the new fascia should further complicate this chart. 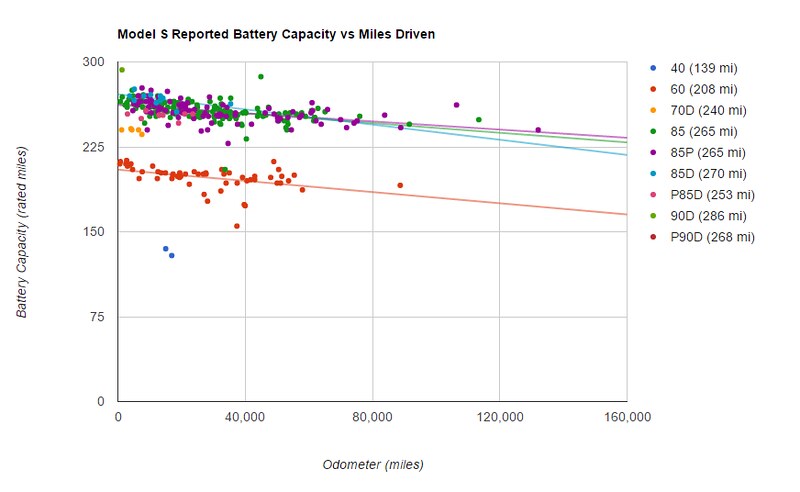 This same chart can be used to also track how a particular respondent’s vehicle matches with the universe of respondents. The Vehicle in black on the chart below shows the performance of my vehicle in relation to other respondents’ cars. 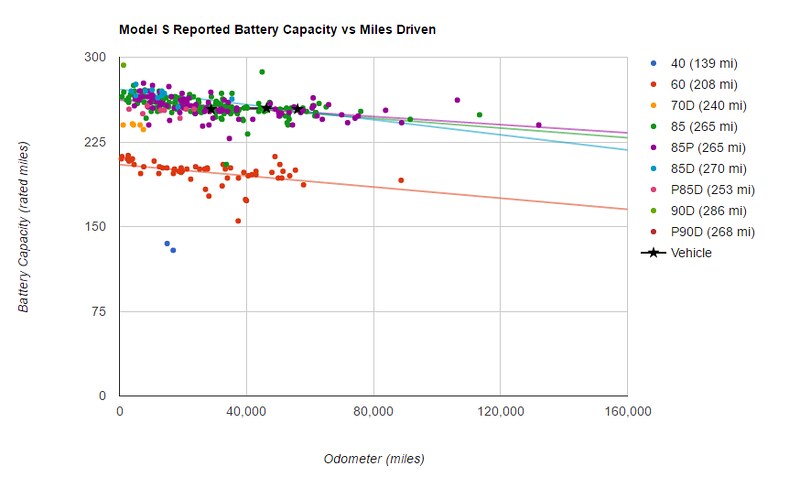 The third chart that was of interest is the reliability of certain components, namely the Drive Unit, battery, and chargers on the Model S. I wonder if the increased reported failures on chargers for 2014 vehicles resulted in the movement from the old chargers to the new 48A charger. 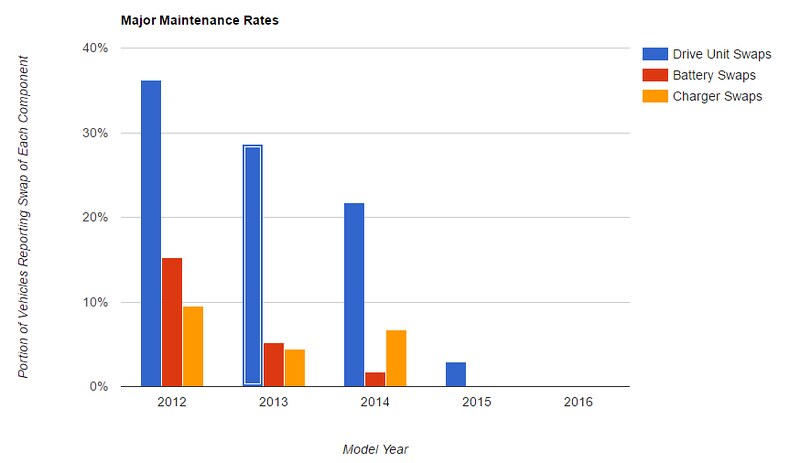 Lastly, the inspiration to my exhorting fellow owners to participate in this survey was the chart of participant vehicles. 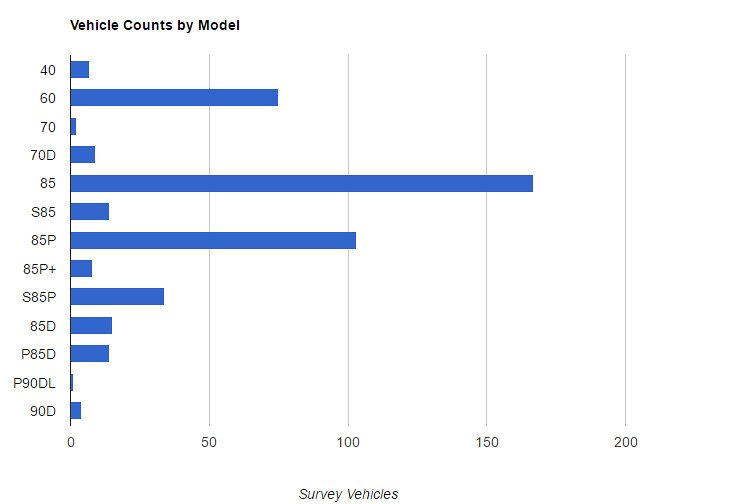 For as many Model S are on the road now, I wonder as to the ability of this study, in its current count, to fully report on the vehicle with a small sample size. The Model S battery survey form is fairly straight forward and serves our common purpose. Tesla has been great, but it’s also good to have interested third parties run a check against what they claim and provide. 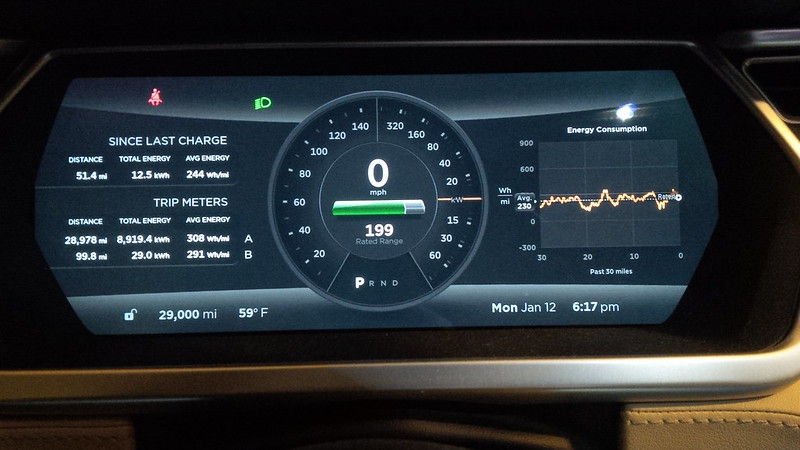 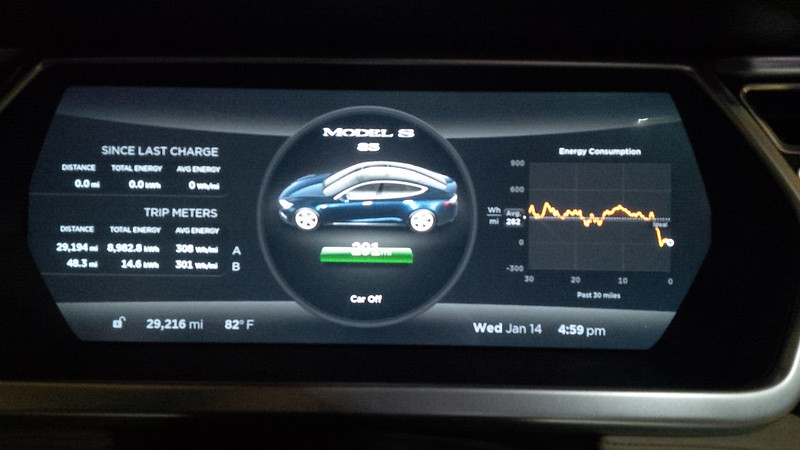 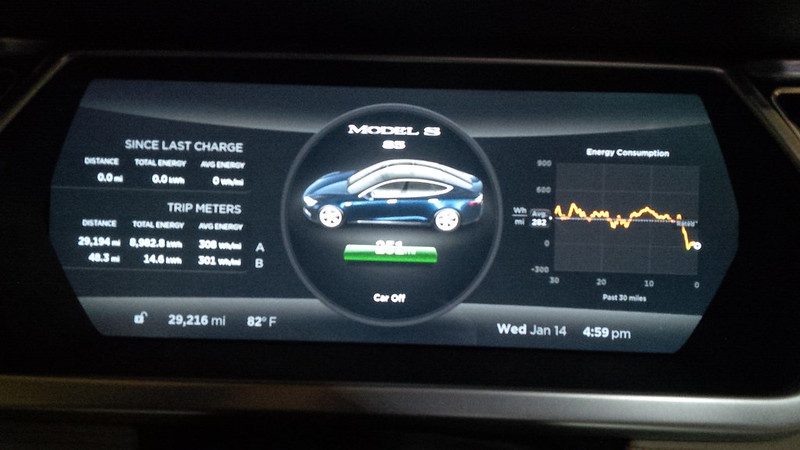