My original instructional post for using CHAdeMO only covered two different CHAdeMO chargers. The Eaton and the Nissan CHAdeMO chargers. Yesterday, I found a combination CHAdeMO/CCS charger from Efacec (the Evapower EV QC 50) at the ARTIC, the Anaheim Regional Transportation Intermodal Center. 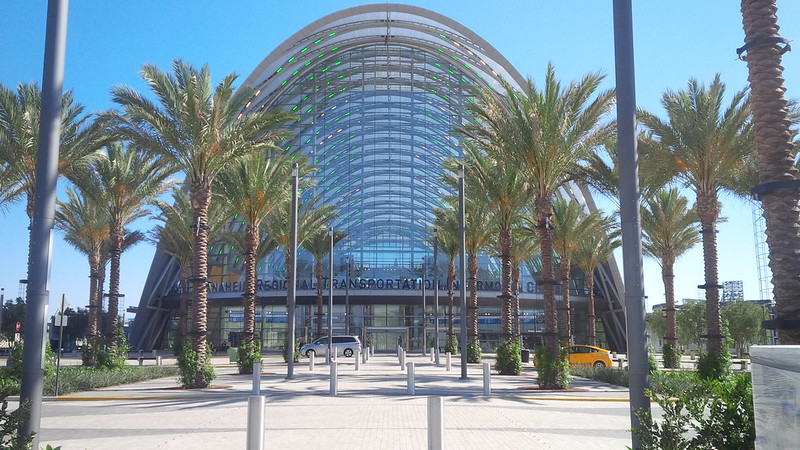 I first noticed the ARTIC from the side of the 57 freeway as I zoomed by on my way home. It is a strangely modern piece of architecture on the same exit as “the Pond” and Angel Stadium. As we passed it on that first drive and on every subsequent drive since then, my wife and I often wondered what it was. It looked like a Disneyland monorail station, except Disneyland was several miles away from the sporting venues in Anaheim.

In preparing to write this update on how to charge using the equipment at this location, I ran into several links about the site that was not very positive about this $189 Million Transit hub.  From OC Weekly when it first opened.  To an LA Times review a week later.  To an update on its operational challenges from the OC Register, half a year later.  Regardless of what the critics may say about this location.  Many of what used to be free to charge CHAdeMO L3 chargers have now been converted to paid use and it is comforting to still have options that currently do not charge for the privilege to charge at higher rates of speed. 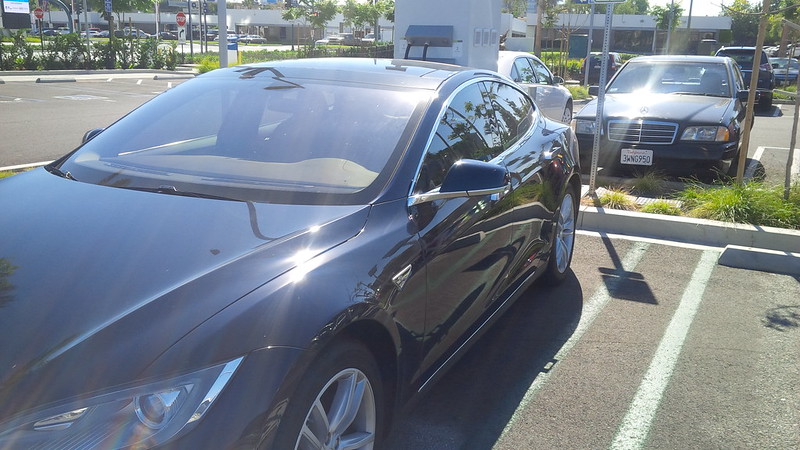 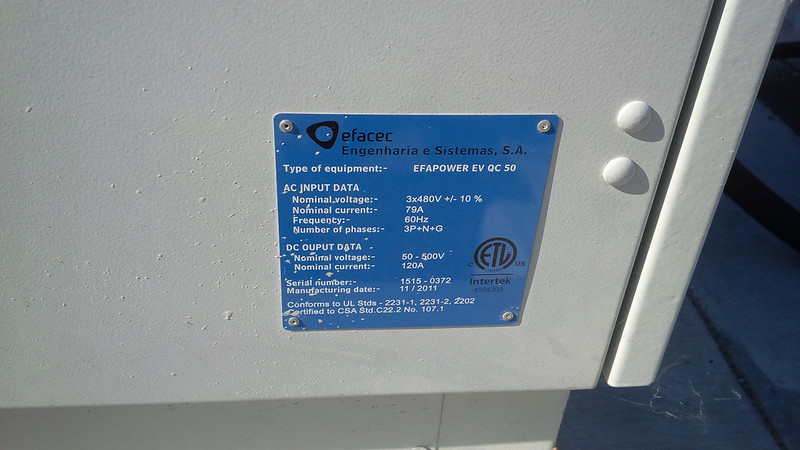 As mentioned, this particular DC Quick Charger is a combination CHAdeMO/CCS charger. What this means is that there are two different “heads” to the Quick Charger, the CHAdeMO one which the Mitsubishi iMiEV , Nissan Leaf, and the Tesla Model S (with an adapter) uses, and a CCS (AKA the “Frankenplug”.) The CCS one is what the BMW i3, Chevy Spark, and others use. 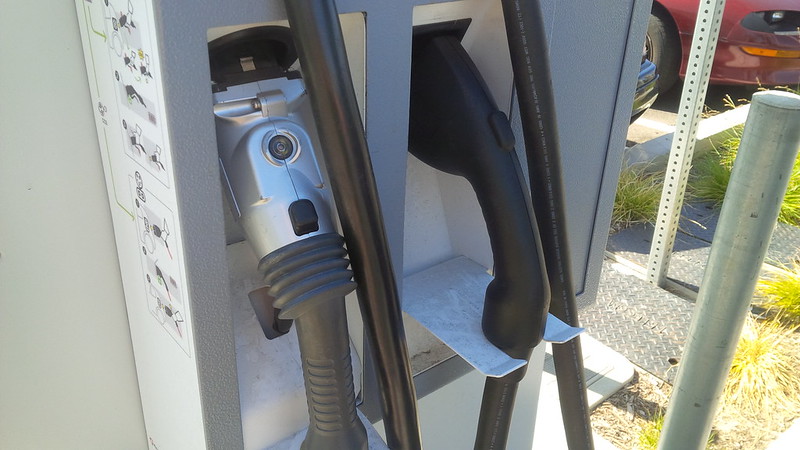 In addition to an RFID Card, the Efacec system at ARTIC also uses the Greenlots App to initiate the charging session. However, there are a few strange things about this particular location. Though there are few Greenlots locations on the map, this particular one does not show up in it.

Since the system has two ports, there is a set of CHAdeMO and a set of CCS instructions. 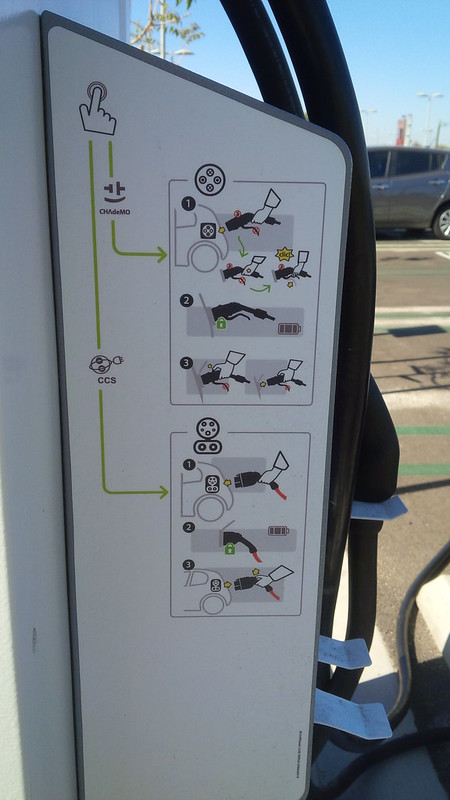 We’ll be following the CHAdeMO instructions. 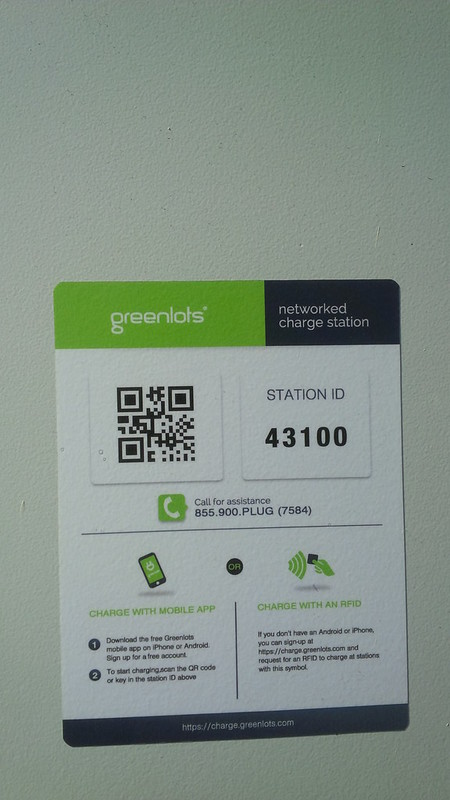 So, aside from downloading the App before charging at this location, I went ahead and followed most of the instructions and steps that I wrote in my original guide.

We pick up at Step 5, we still need to make sure to follow Step 4 and align the notches appropriately, it won’t fit otherwise.

So, on the Efacec L3 charger, it looks like this. 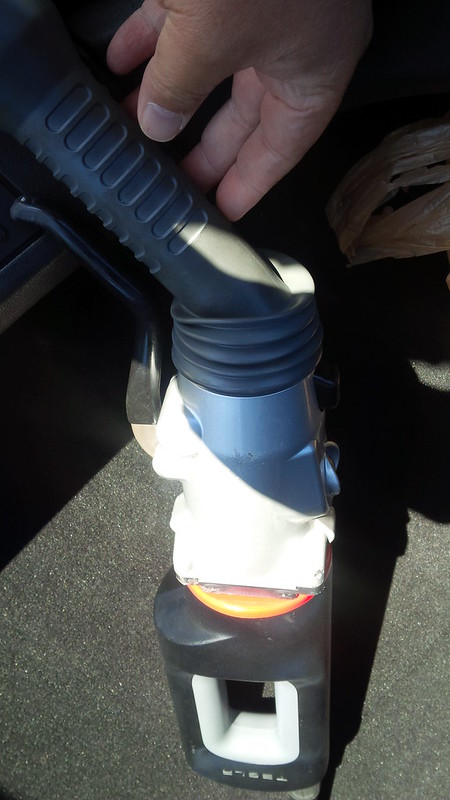 Like the Nissan CHAdeMO adapter, make sure to pull the trigger on the Efacec CHAdeMO to secure the piece to the adapter. Now, with these App initiated.

Step 6 is to plug the Adapter to the Model S. Here is the Efacec CHAdeMO pictured: 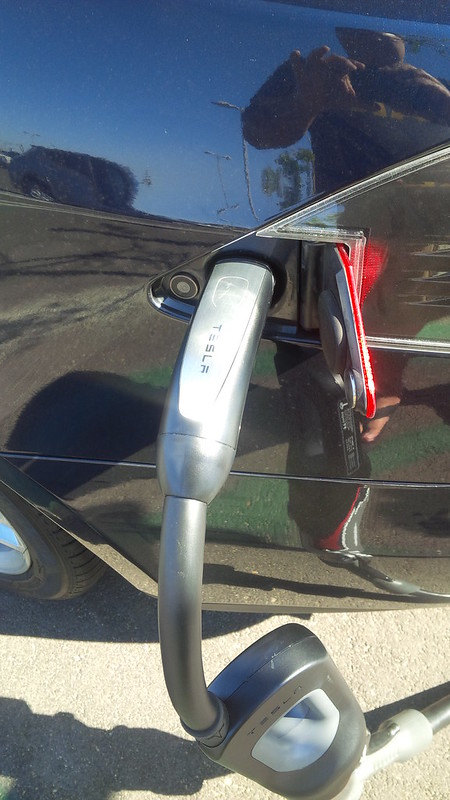 It looks similar to how the Eaton sits on the Model S.  I use the cable to push the Model S to CHAdeMO adapter up so that the weight is on the CHAdeMO cable rather than pulling on the Model S port. 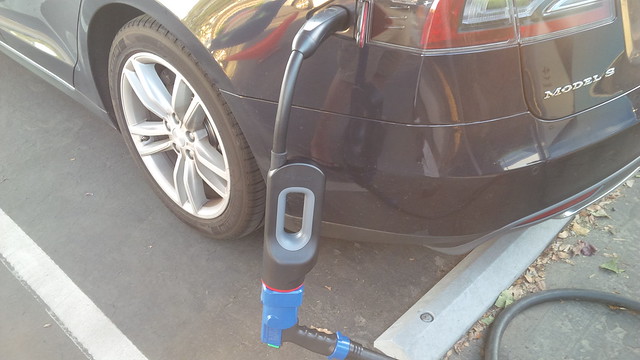 Now where we differ from the original steps come in a new Step 7.  Now with this new step, all the other steps get pushed back one.

Step 7 is to authenticate with the charging network.  With this Greenlots App, I scanned the QR Code on the charger. If we had the RFID card, you just swipe it. Additionally, it seems that there is also a Credit Card reader built-in to the charger. However, since this location is free, I chose the QR code method. 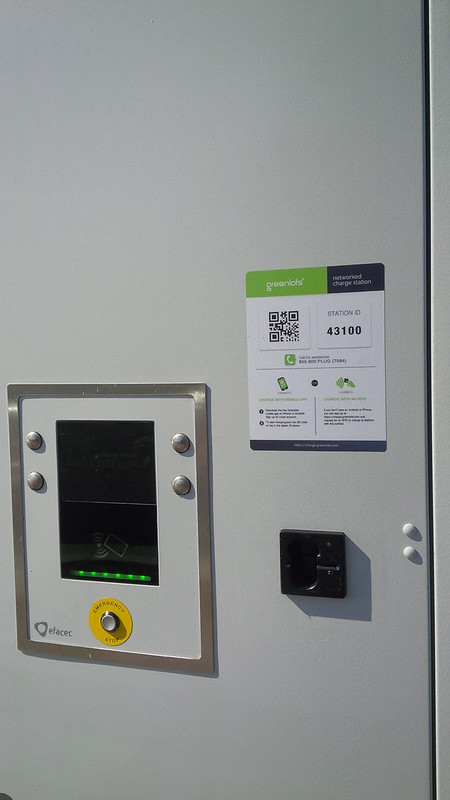 Step 8 is to start the charge. With the method I chose, the Greenlots App shows a virtual button to choose which port to initiate charge with. So, I started the charge for the CHAdeMO, which is on Port 1. 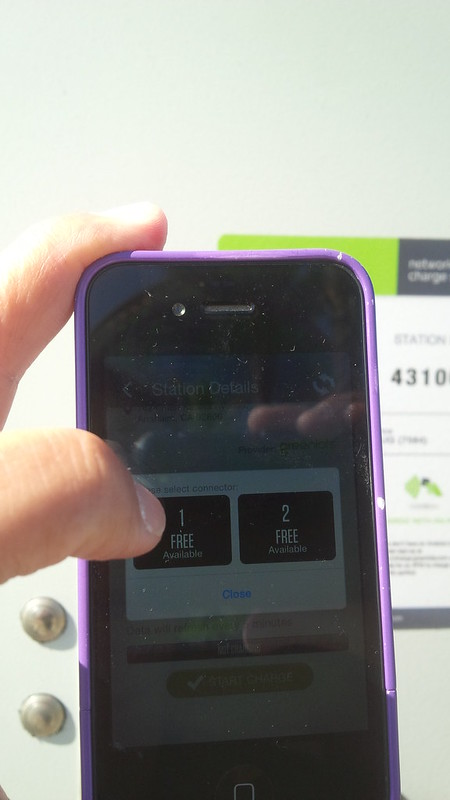 Aside from starting it from the App, the charger still presents the user with a physical button to complete the charge initiation on the Efacec charger. The soft button on the upper right becomes a START button. 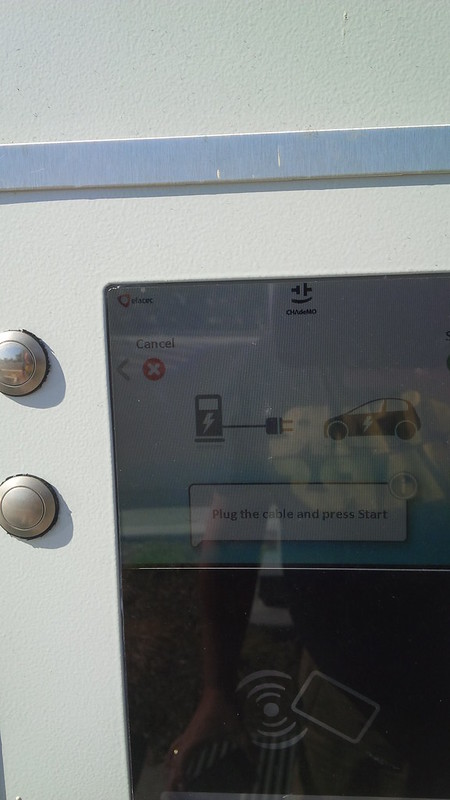 Step 9 Go back to the car or go about your business, but put a note on the car if you do leave so that anyone who needs to use the charger can contact you.  If you choose a note, let me recommend the EV Card from Plug In America or Jack Brown’s Take Charge and Go tags. Additionally, I would recommend checking into Plugshare so that anyone looking at the location remotely will know that someone is charging, at the moment. On the display of the charger you will notice that the battery capacity and start of charge shows up. 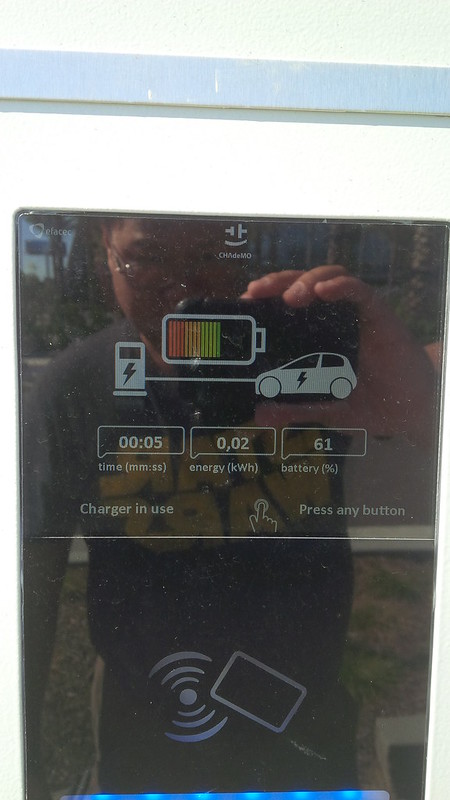 Green light on the Model S chargeport tells you that the car is charging. 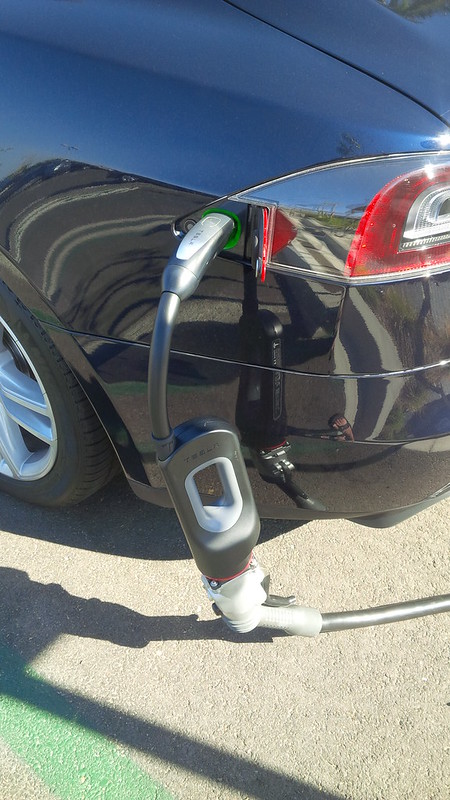 If you go back to the car, you will notice the charge speed of CHAdeMO. As opposed to the Eaton and Nissan chargers, the Efacec at this location was providing me with 152 to 156 miles per hour. I forgot to photograph the screen on the Model S, but I did take a photograph of the charger display before it completed. 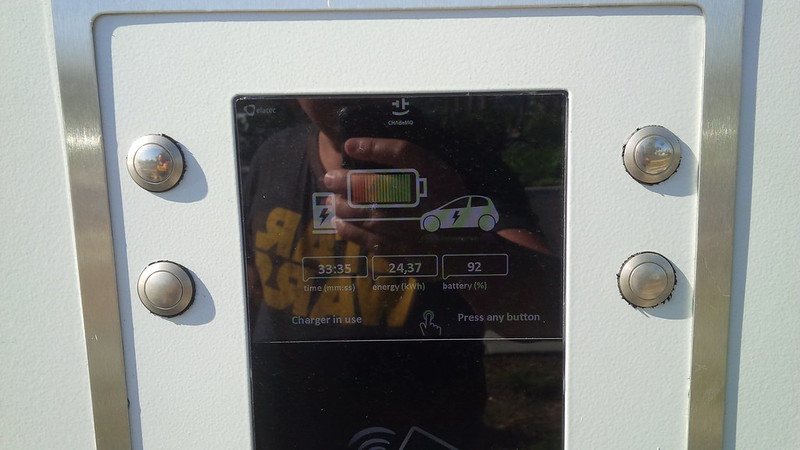 There is no estimate of how long the charging will take, but it does show the elapsed time charging, the amount of energy provided to the car and the car battery’s state of charge (SOC) percentage in real time.

Since no one was waiting, and I was just hanging out at the car, I figured to get it close to full.

Step 10 When done using the charger, press the STOP button 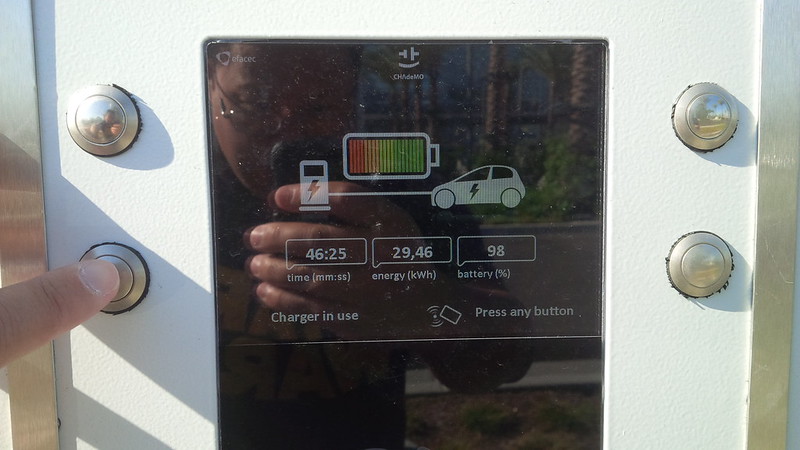 When I press one of the buttons and the stop is displayed, the screen goes from black to white. I figured to wait until I got to 47 minutes of charging. 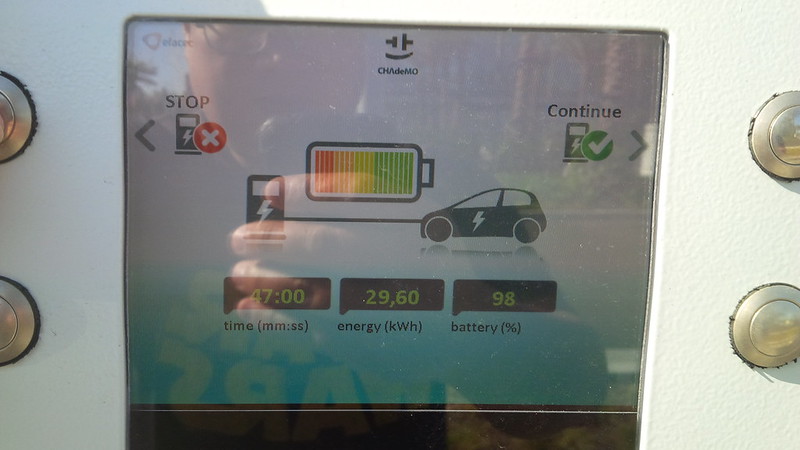 Then press the Stop button (the upper left soft-key).

If you press that button the screen updates itself, first with the following “Ending Process message”. 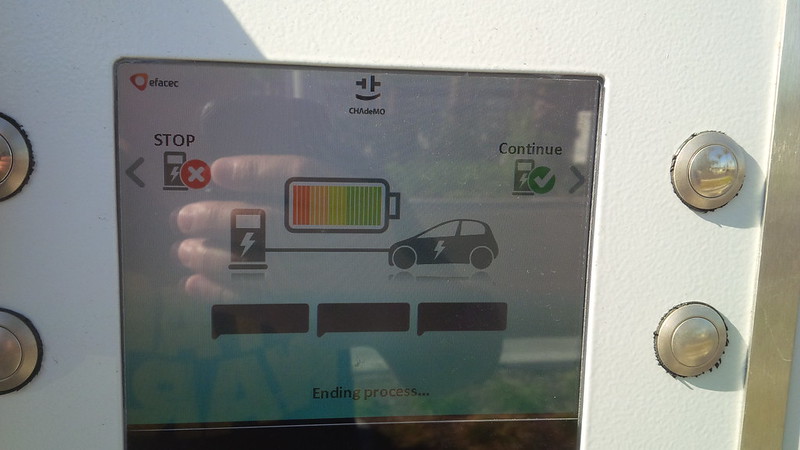 Then the charge ended by user message. 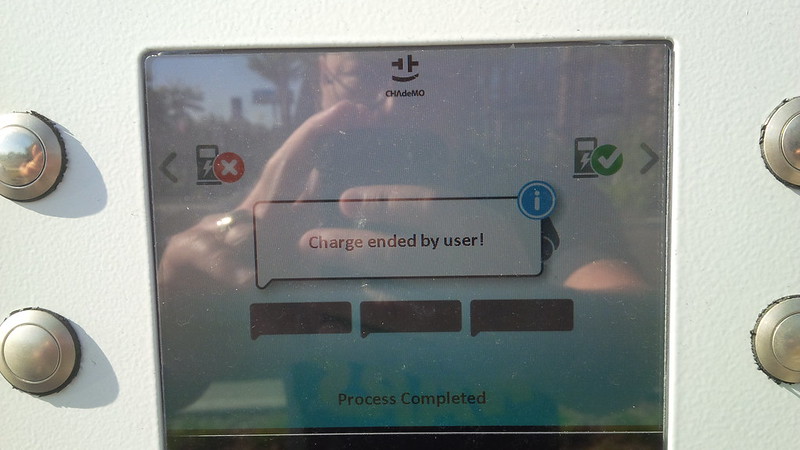 Since I registered for an account, I actually receive an email and text message with the charging sessions statistics, cost, kWh, and time at charger.

Thank you
The Greenlots Team

Step 11 Detach the Adapter from the charger’s CHAdeMO cable.

The Efacec CHAdeMO is similar to the Nissan charger in that there is a button on top to detach it from the Model S cable.

Step 12 Return the cable back to its proper location. 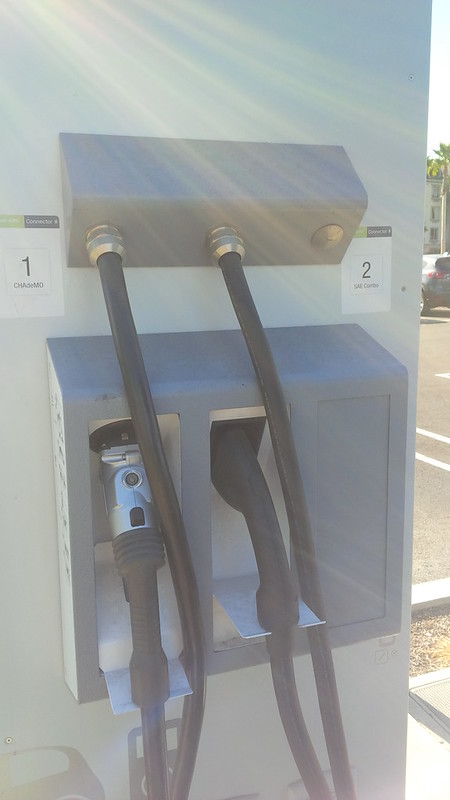 Step 13 Return your CHAdeMO to Model S Adapter back to your car and drive off. 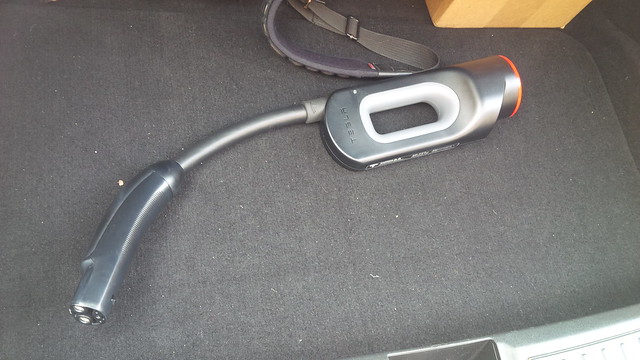 If you’re interested in more pictures of the CHAdeMO to Model S Adapter, here’s my flickr stream. And if you’re looking for the instructions of the same things on a Nissan or Eaton Charger, here is the link to the original instructional post for using CHAdeMO that I wrote a few months back. 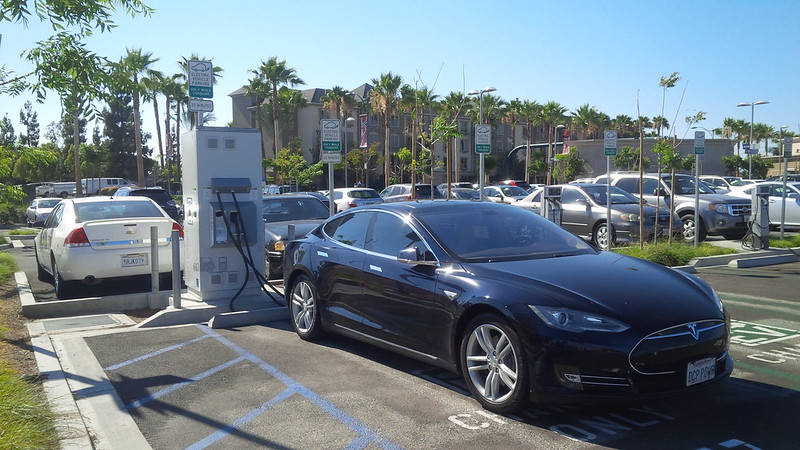 Since this is a combo CHAdeMO/CCS station, I don’t know if it is one of those sites that only lets one car use the DCFC on EITHER the CHAdeMO or CCS OR if it is one that lets two cars use both at the same time. No one else showed up while I was there the 47 or so minutes at the site. The only other EV was a Leaf that was using the L2 J1772 stations that were next to the DCFC (pictured in the background below.) 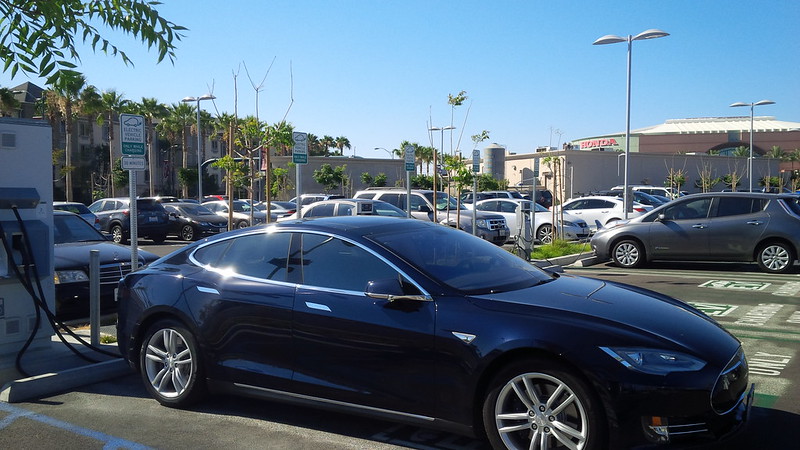 Something to see some other time. Seeing that many of the DCFC are available for at least $5 to initiate charge, I probably will only use this “in a pinch.”