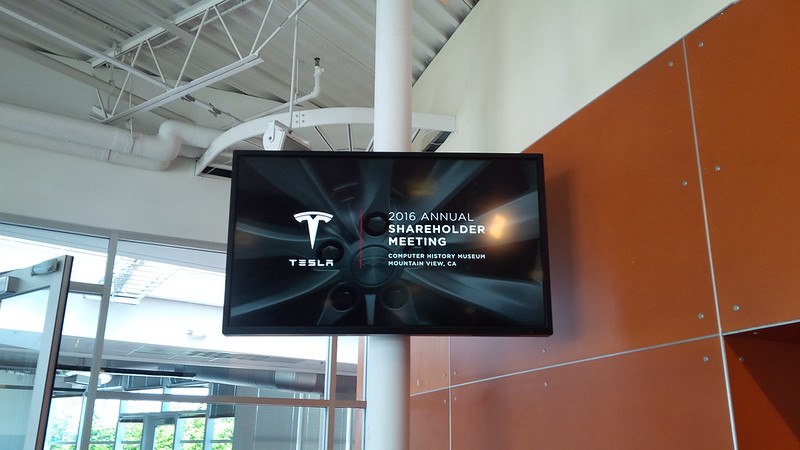 We attended the Tesla Annual Meeting in person on May 31, 2016, 2:00 PM Pacific.  The meeting was held at the Computer History Museum, 1401 N. Shoreline Blvd., Mountain View, CA 94043 as well as provide the annual meeting is also available online.  Needless to say, we’ll provide a drive report follow up soon (Day one of the drive released now.  Day two of the drive scheduled 6/10/2016 at 10AM PDT/6 PM BST.) 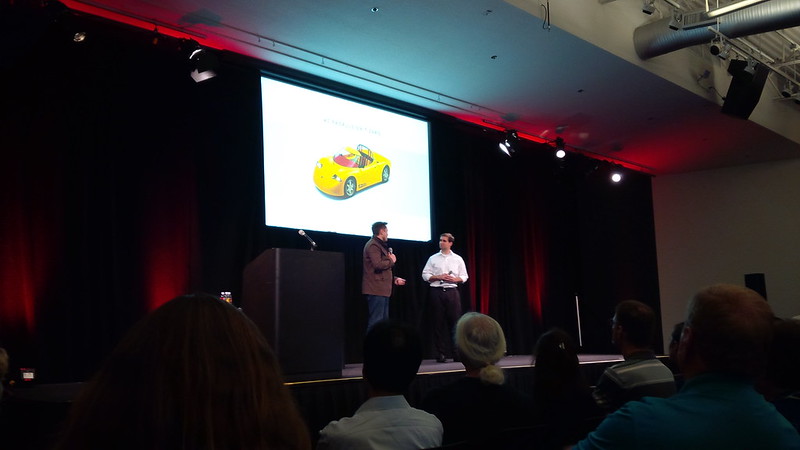 Having only attended the Tesla Annual Meeting online, we didn’t really know what to expect on this trip. 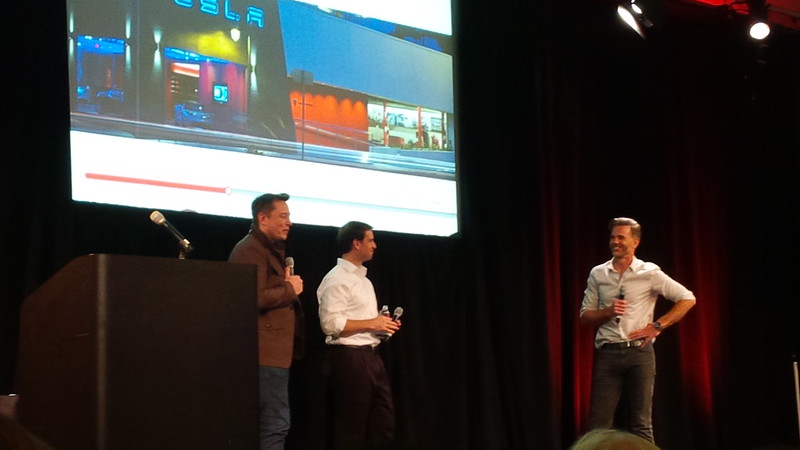 So, Elon, accompanied by JB Straubel, decided to give the attendees (and those that watched online) an approximately three hour recap of Tesla history as they recall it.  As the saying goes, “History is written by the victors.”  I won’t be analyzing the recollection of those there, I wasn’t, but those long-time Tesla customers that were there seem to remember different stories throughout the years.

What I wanted to focus on is “what was the point of recapping Tesla History” for the Annual Meeting.  I think a few of Elon’s statements at the start of his portion of the meeting holds a big clue on what the whole point was.  Elon’s statements that I would like to focus on are: “The decisions of the past inform the decisions and motivations of the future.” as well as a few minutes later “…made with the right motivations… We say the things that we believe, even when sometimes those things that we believe are delusional.”

So, why the three hour history lesson?  I have a few theories and I’d like to go through these theories.

My first theory is this is Tesla’s first annual meeting to introduce future owners, i.e. the hundreds of thousands of Model 3 reservation holders, to Tesla. They want to start to manage the expectations of future Model 3 owners and let them know what they’re getting themselves into.

The second theory is to show the significance of the pending launch of the Tesla Model 3 to the mission of Tesla.  Time and time again, the Tesla “Secret Plan” has been brought up to show the plan and method that to bring about Tesla’s goal to electrify transport and lead the industry to move off fossil fuels.  This goal is integral to their DNA and though they had done this first by building the Roadster, followed by the S and X, the 3 is the goal.  Providing a mass-market, affordable electric vehicle (EV) that surpasses its internal combustion engine (ICE) counterparts is what they want to achieve.  The history lesson provided that directly in their talk and actions.  The significance of providing the Tesla patents for use by their competitors speaks of how much they believe in that mission.  It’s been almost two years since the publication of that policy and the fact that none of their competitors have taken them up on any of it is not Tesla’s fault, it’s on their competitors.

The third theory has to do with what has happened a few weeks earlier, in the midst of the departure of a couple of key production executives (article on Bloomberg and Fortune (though a little over a week later, Tesla hired an experienced Audi executive (Peter Hochholdinger) to lead the production efforts,) Elon announced the movement of the production targets from 500,000 units from 2020 to 2018. This move shocked the public and reverberated throughout many of the discussions on Tesla stock since.  There was a lot of skepticism held by many (including this author prior to the history lesson on May 31st) that this change to the target of 500,000 units from the 2020 deadline to the 2018 deadline is an improbable, if not an impossible one.  There were many automotive analysts and other smart people in the automotive industry that let the public know that this was simply impossible.

I bring this up because, I believe that one of Elon’s points in describing Tesla’s history is to show the many times that the company faced seemingly insurmountable challenges and what they did to overcome such challenges.  Throughout the approximately three hours of the discussion, Elon and JB discussed the times when Tesla faced challenges that were more dire for Tesla and how they prevailed.  They also discussed times that Tesla’s momentum of growth, (as I see it, the percentage year over year of vehicle production) has been greater than the 500% required to grow production from 100,000 vehicles to 500,000 vehicles.

For example the differences between 2012 and 2013 production is a factor over 5x the previous year’s production (4,846 vehicles in 2012 and 27,644 vehicles in 2013). Furthermore, throughout the presentation, Elon and JB introduce us to several members of Tesla that have been with them “since the beginning” and show the creativity that these personnel exhibited to show how they solved problems that occurred in the past. 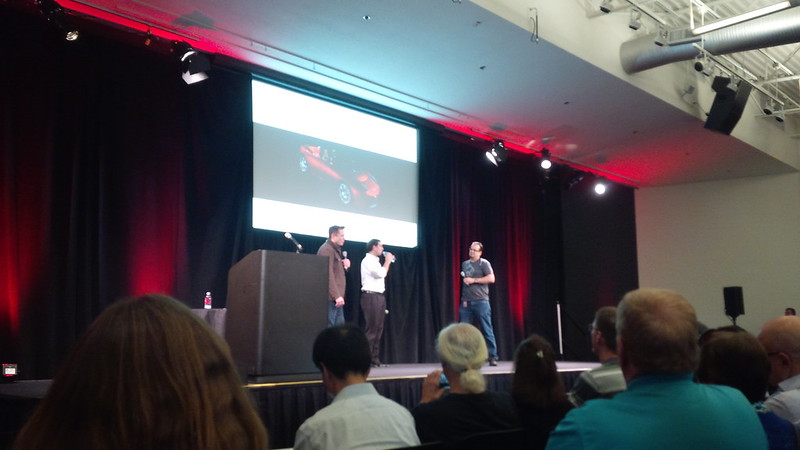 They showed that a lot of these folks have been with Tesla over a decade and that these are the same people that spent their time focusing on enhancing and fixing issues that were in the product. 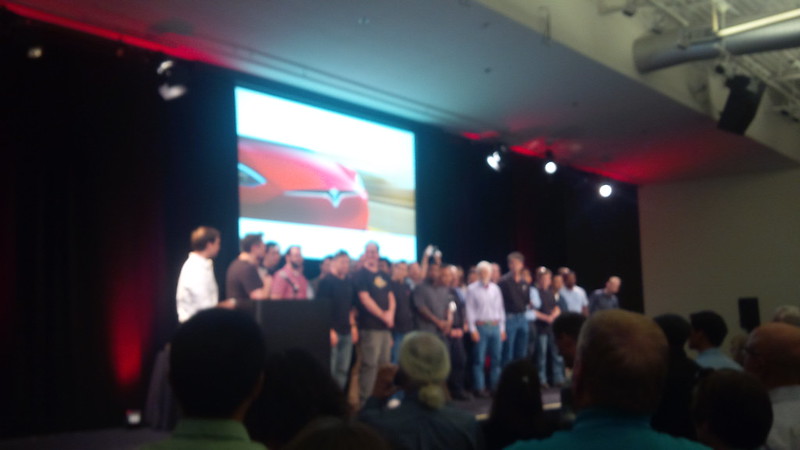 Throughout the history lesson, Elon and JB showed that Tesla’s talented technical folks solved seemingly insurmountable problems by focusing and coming up with creative solutions.

In discussing “physics-first principles” and using the term “building the machines that build the machine”, Elon is telling us that he and his talented team will focus on fine-tuning the factories (both the Tesla Fremont Factory and the Gigafactory.) In discussing the future he wanted us to think of the factory as a product. He mentions his belief that “the potential for improvement in the machine that makes the machine is a factor of ten greater than the potential on the car side. Maybe more than a factor of ten…” Later on, Elon discussed the exit velocity of production at the “advanced car factories in the world” to be close to making a car at every 25 seconds, but that means that 0.2 meters per second, and that this not much faster than a tortoise, and he is looking to get Tesla’s “machines that build the machine” have an exit velocity equal to walking speed or a meter a second of production. Considering that the “advanced car factories” build more ICE cars that are inherently more complex than the electric cars that Tesla builds it is not inconceivable to see that there are production gains and performance gains to be made by fine-tuning the factory. In addition JB mentions that by shifting design resources that have been focused on improving the car to focus on improving the factory they are finding tens to hundreds of a percent of efficiency gain that are both phenomenal and close at hand.

Needless to say, we were duly impressed with the extended length Annual Meeting last week. I think that Tesla did a great job of communicating the three points that I thought was the goals for this meeting. I truly hope that Tesla’s talented employees are able to improve on the factory (i.e. the machine that builds the machines) to the factor that Elon and JB had communicated. As for the drive to Mountain View and back for this trip, I have published Day One of the drive here. I published Day Two of the drive here.

A day after publishing my post, Tesla stock soared $11.66 (5.28%) during the trading day.  Some would say perhaps it was my comments that drove it up, alas, it wasn’t my article.  Ron Baron of Baron Capital was extremely bullish about the company, and echoed comments similar to theory #3 of my post.