With a hat-tip to the 2004 TV mini-series from Ewan McGregor and Charley Boorman. This is the fourth day in a series of posts written about our 2016 EV Roadtrip written in the same manner as our 2015 trip.  Here, There, and EVerywhere Trip – Day 01, i.e. summaries written for each day of the trip, published each day, this time two months from the day of the trip. It may seem funny to some to have a summer trip published at the start of the Fall, think of it as some daily entertainment for those that are back in their offices thinking about their past summer trips that could have been or thinking about their next trip.

Missed the previous day’s post, click here to read Day 3 of this trip.  You’re just joining us on this trip?  Click here for Day 1 and start from the beginning!

So, why the long way round? Well… We got four referrals on the Fourth Tesla Referral Program (May 30, 2016 to July 15, 2016) and we expected to get an invite to the Gigafactory Party, so we thought to start our trip and go to Reno (a nearly 500 mile direct drive from home) via the Pacific Northwest (about a 1600 mile detour) with the intermediate goal of attending the EV Roadmap 9 Conference in Portland, visiting family who were spending time in Seattle, WA and family in Vancouver, BC before turning back for the party.

So, what do we have in store today? We’re still in Portland attending the second day of EV Roadmap 9 conference at Portland’s World Trade Center.  So, we have the intermediate goal to complete.

Though we have In and Out privileges for our car at the hotel for the conference, I opted to use other means to get from our hotel to the EV Roadmap 2016 conference. I still had a few Lyft credits left, but felt it wasteful to use this because all the cars that came out to help us in Portland have all been ICE. As cool as it was to have someone else drive us around and as cheap as it was because of the credits from T-Mobile, I figured to do something different.

So, for day two of the conference (or day three, depending on how you look at the agenda, considering the previous day was “by invitation only”, I’m counting that as zero.) I decided to forego the high cost of downtown Portland parking AND gasoline. I decided to take the Trimet Trolley system. This method of transport was actually $1 more for me than Lyft because of the credits and the $2.00 tip versus $2.50 each way pass, but I thought why not.

The Trimet station was just across the street from my hotel and a few blocks away from the conference.

The first tram to stop was going the other way, so I took a photo and waited for the one toward City Center. 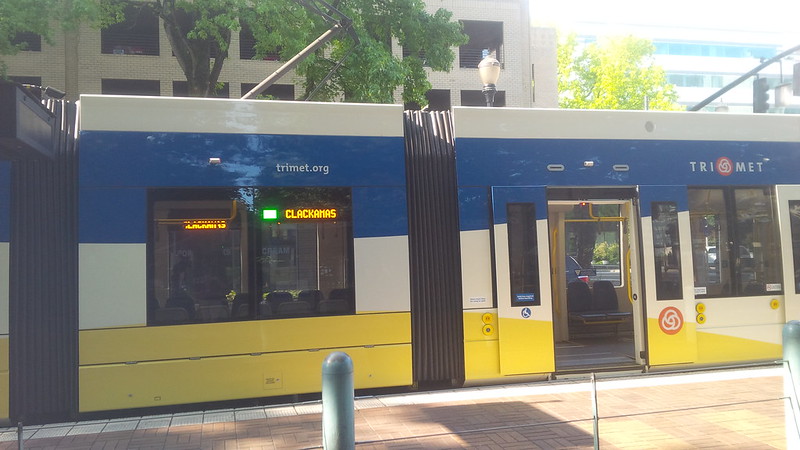 It wasn’t a long wait. 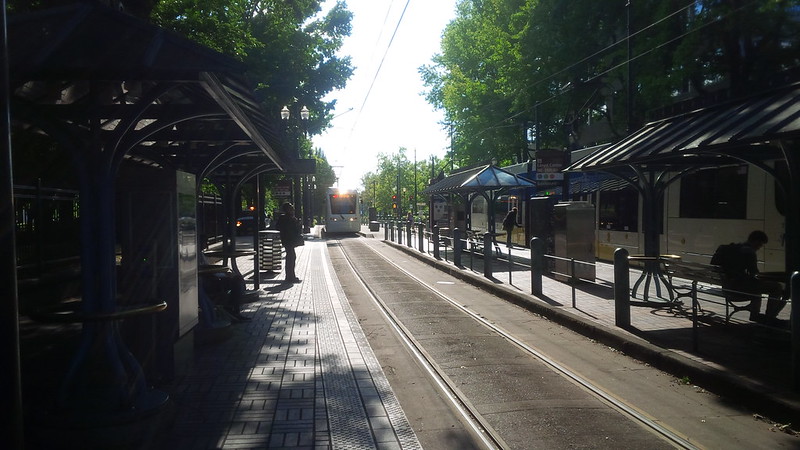 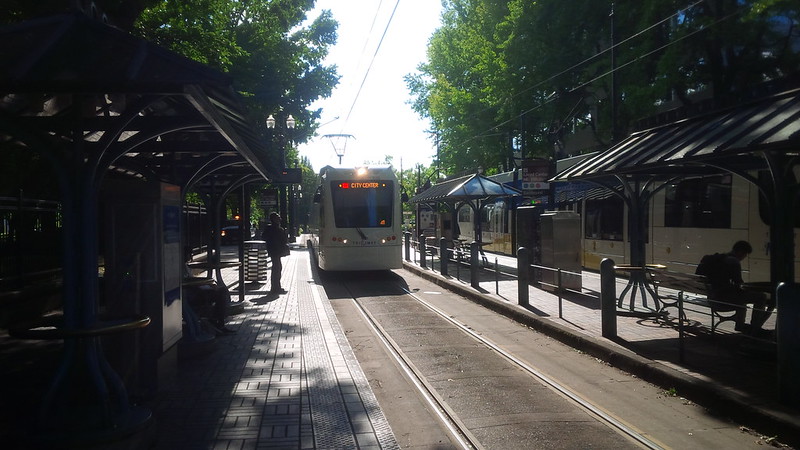 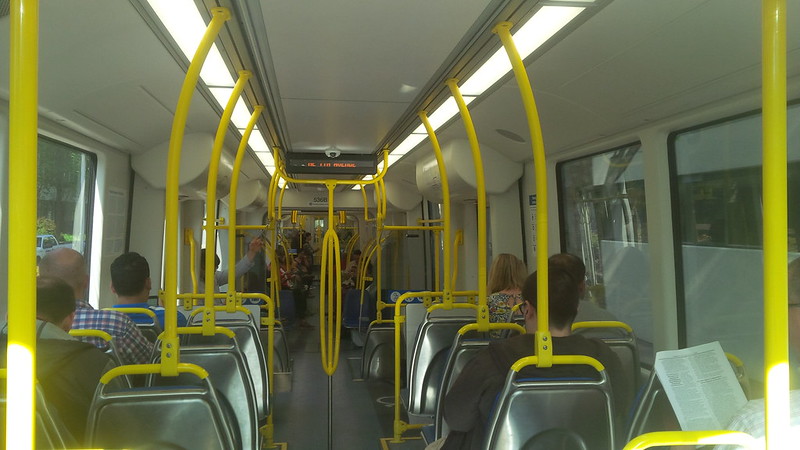 The Trimet tram is similar to the Blue Line/Red Line in Los Angeles, but had the additional cool factor of crossing over water on the bridge. 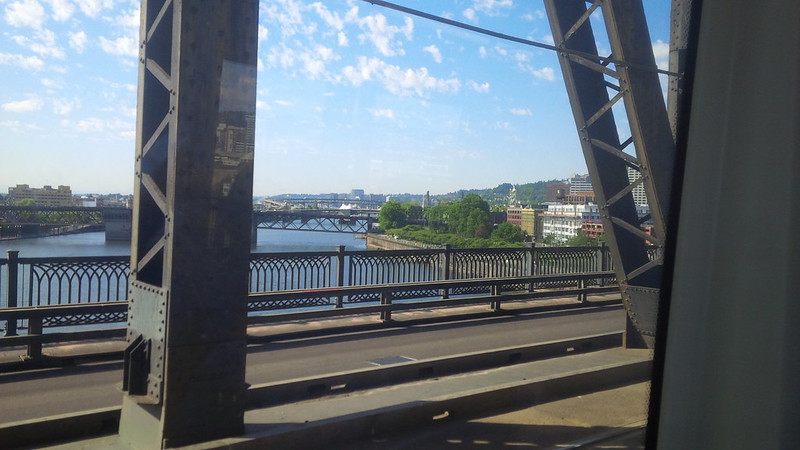 The few times I took the Metro in LA, none of my trains did that.

So, for a little longer than what the Lyft ride took me, but a lot cleaner transport, I found myself back at the conference. 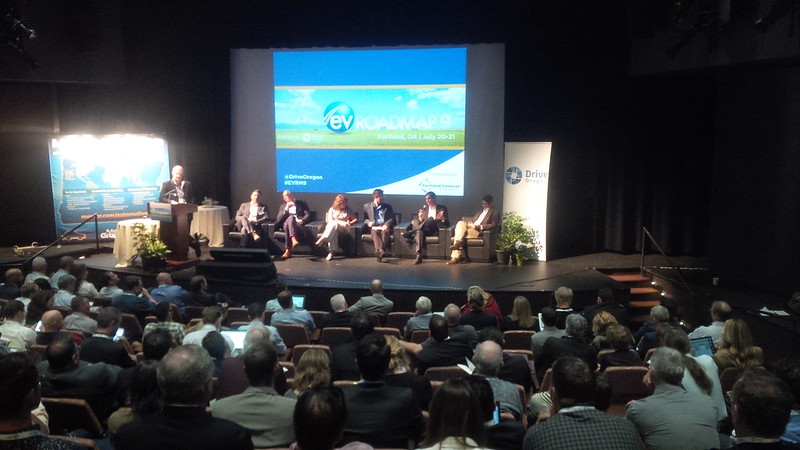 I then continued to the sessions on deploying Fast Charging networks. 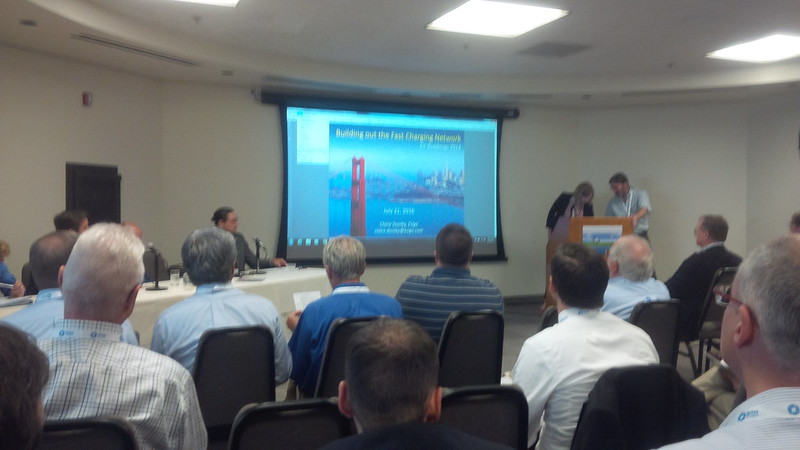 It is interesting to note that many other charging network providers have learned from the lead that Tesla has provided and folks are now ensuring that future deployments should consider a redundant deployment of fast chargers rather than a “ready” state in addition to a single DCFC as has been deployed in the past. The industry is looking to design for future success rather than have single points of failure along the charging corridors that are being deployed. (Common Sense rules!)

At lunch, I ended up with a table full of many of the same folks that I have had the pleasure of talking with the previous day.   There was an award presentation for employers regarding Workplace Charging.  Even though EV Roadmap is one of the premiere North American conferences for the EV industry, it is still focused on Oregon and I believe all the awards were for local businesses. 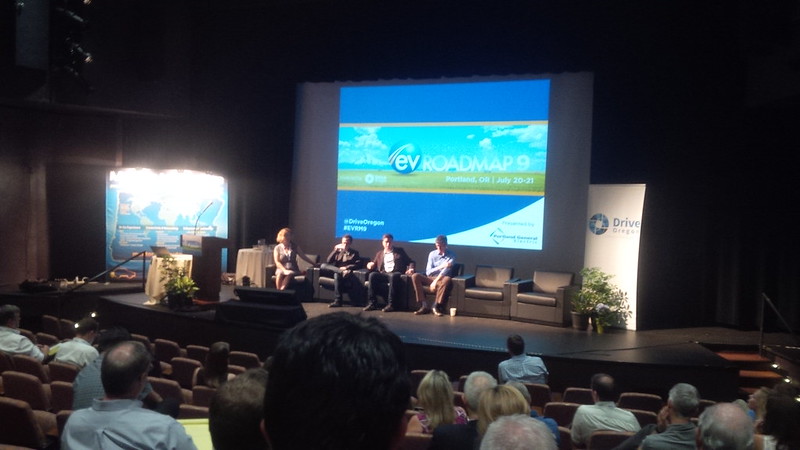 After lunch there were several more sessions that I attended.  The most interesting one was the one for Electric Vehicles in the Media.  I had hoped to meet Nikki Gordon-Bloomfield of Transport Evolved as she was originally scheduled to be in that session, but had to bow out for personal reasons.   Nevertheless, the three presenters and moderator did a good job being one of the more entertaining sessions.

I walked by a full Electric Avenue charging location on my way back to the Trimet Trolley. 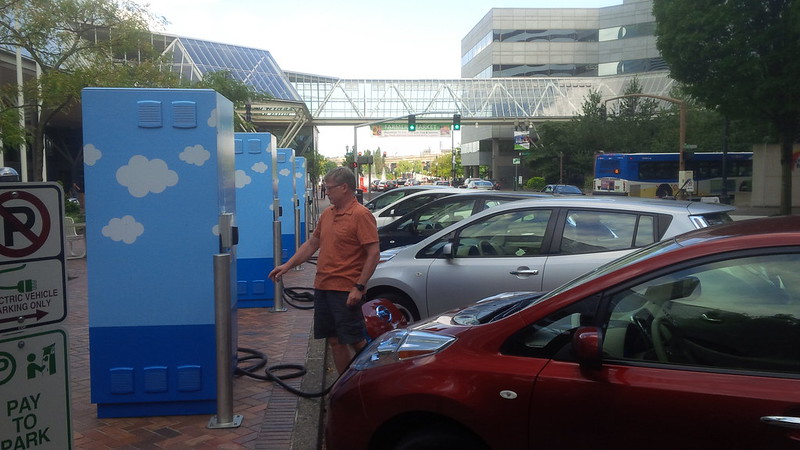 I caught the train across from the Apple Store in Downtown Portland. 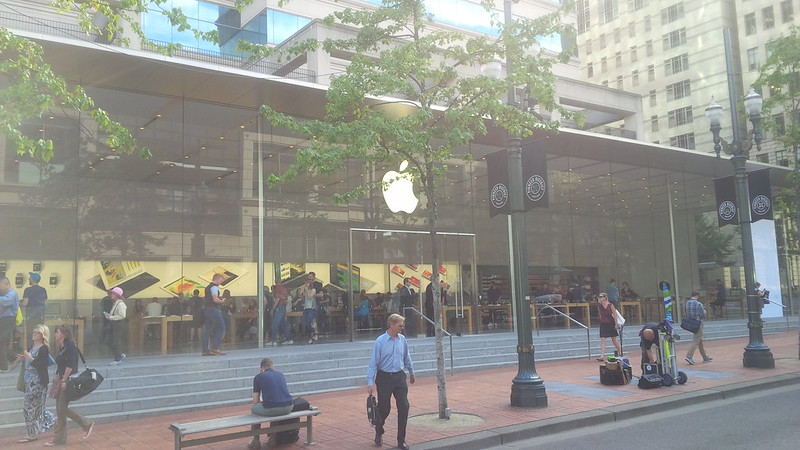 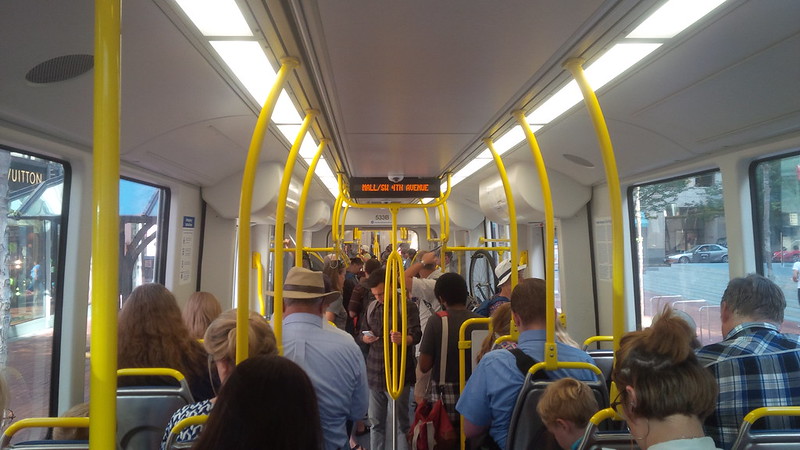 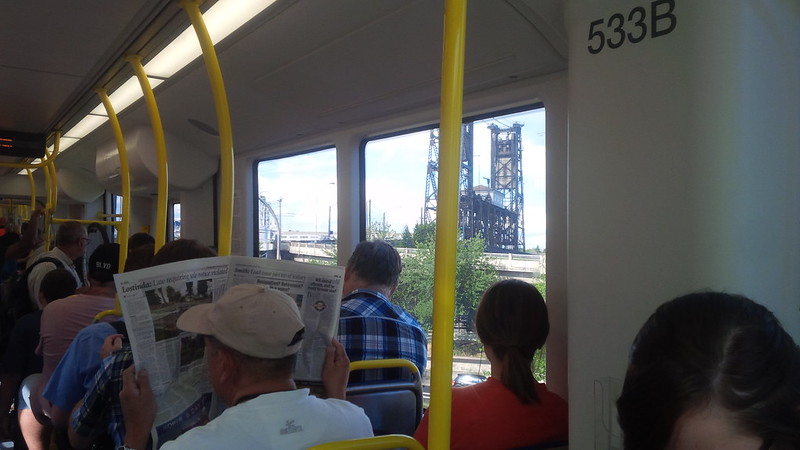 Not as packed as a London or New York train in the middle of Rush Hour, but definitely a good sign of a well received public transport system. Besides, it’s an EV.

Another crossing of the bridge. 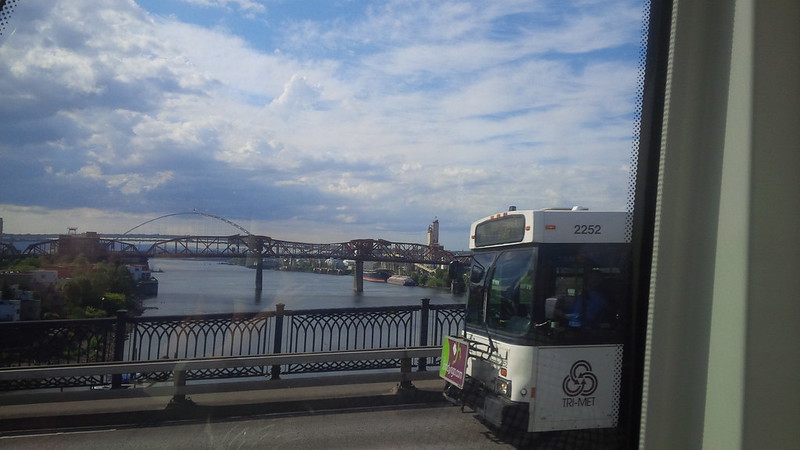 One of the interesting things that launched in Portland during the conference was a Bike Sharing system that looks to have had a good uptake in ridership as well. The Portland system is called Biketown and is sponsored by local employer Nike. (Similar ones have been launched in other cities, such as the Boris Bikes in London and Citi Bikes in New York.) 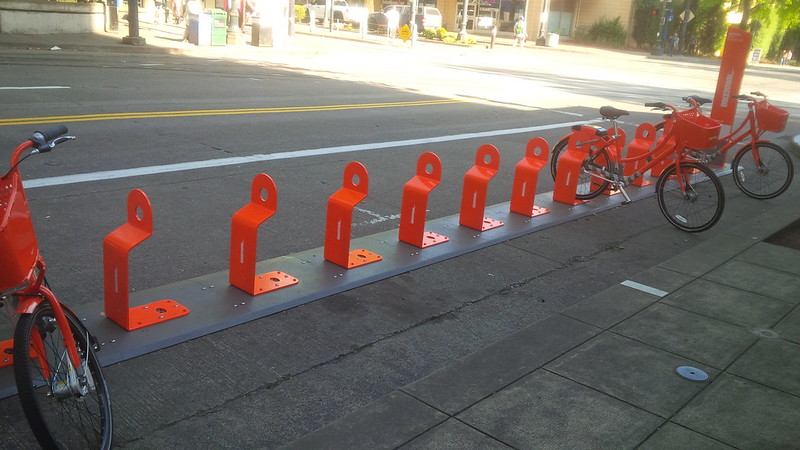 Biketown actually sponsored the conference and could have been an option to try for my commute back to the hotel, but decided to have someone else drive. Though I know how to ride a bike, I haven’t done so in a while, and riding a bike in a busy downtown area may not be the best way to re-introduce myself to the pleasures of cycling.

We had plans to return to Lincoln Restaurant for our last dinner in Portland on this leg of the trip and took our Model S back out for the drive. 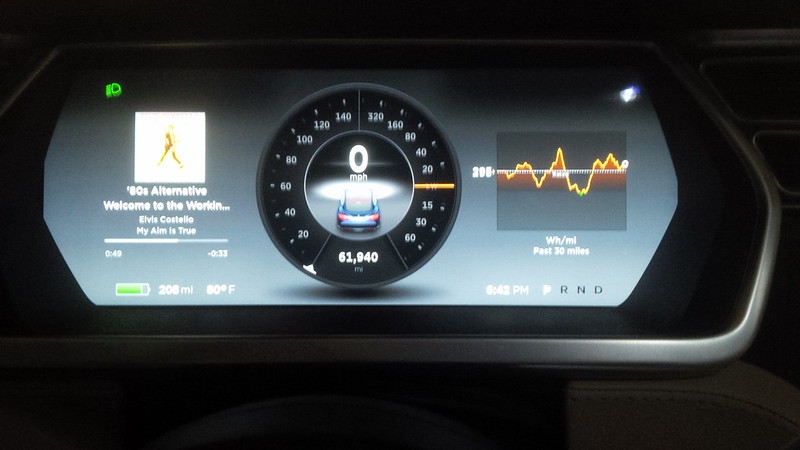 It looks like we started the drive to the restaurant at 208 miles, so that’s another seven miles of vampire loss from sitting in the parking lot all day. 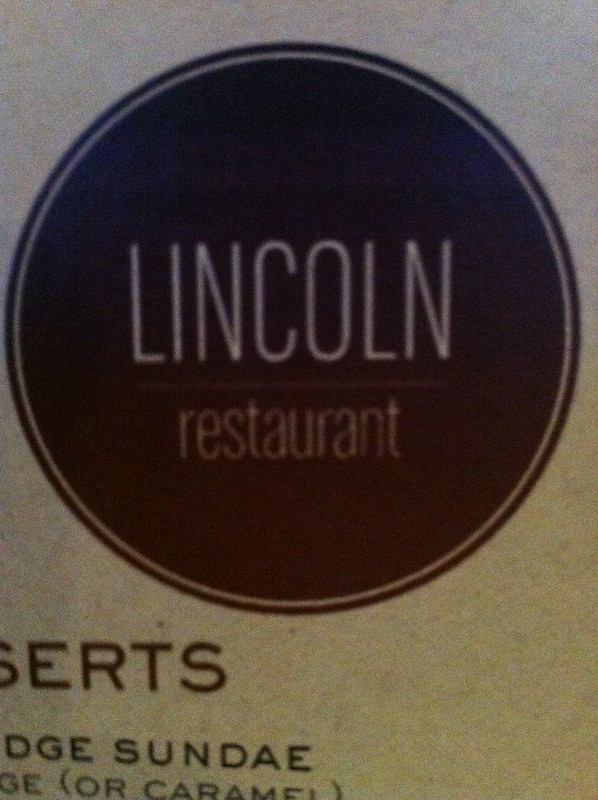 Lincoln is a wonderful restaurant owned and operated by Chef Jenn Louis. This dinner would be the second time for us to visit this restaurant. The Chef is actually the sister of a high school classmate of mine and we originally dropped in a few years ago to check out the restaurant. We were impressed by the entirety of our restaurant experience, from the meal to the service to the dessert,  that we have added her restaurant to our list of places we “must visit” everytime we’re in her town.

Started off with the Octopus on the Plancha 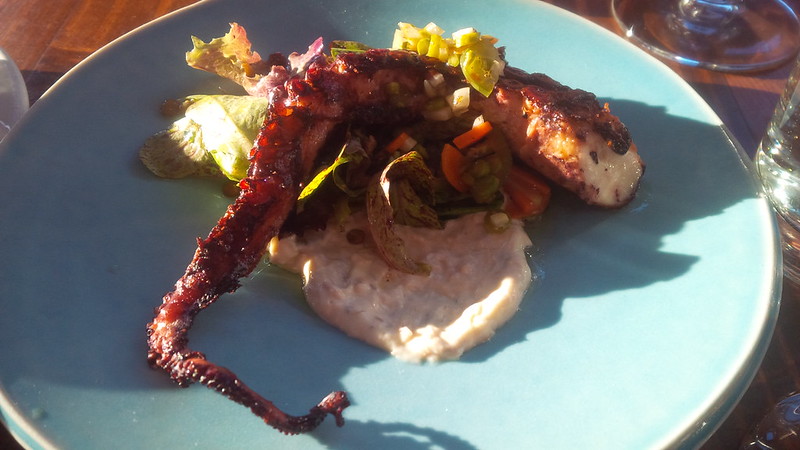 and the Baked Hen Eggs 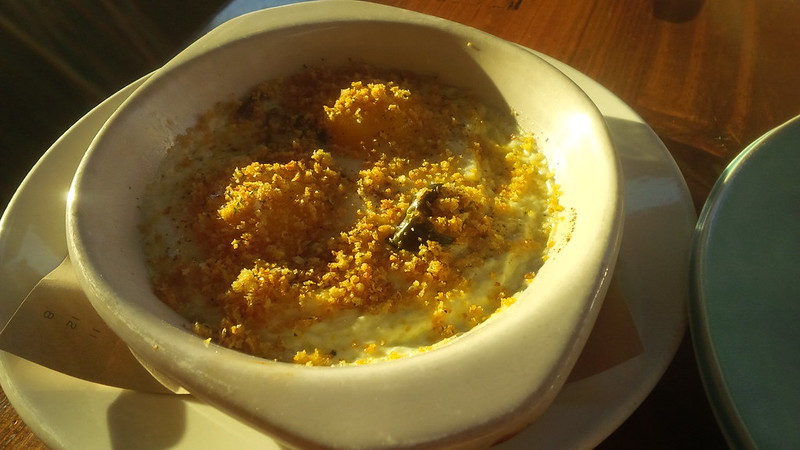 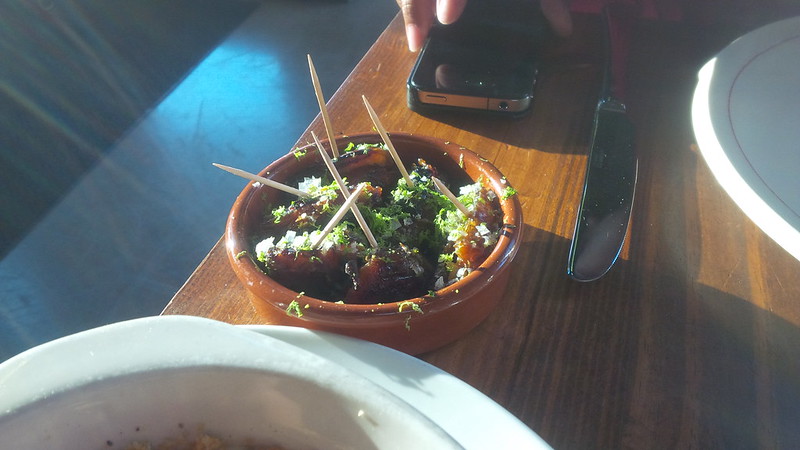 Since Jenn’s first cookbook was called Pasta by Hand, have to try her pasta (besides, I prefer to have someone else’s hands make and cook the pasta for me ;-),) and decided on the Bucatini with herb pesto, oil-cured olives, and walnut. 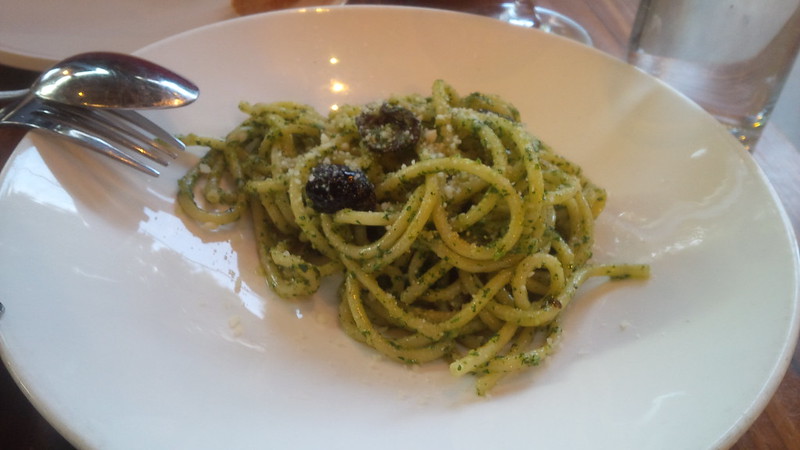 and a nice NY Steak with prosciutto, blackberries, blue cheese, and panzanella. 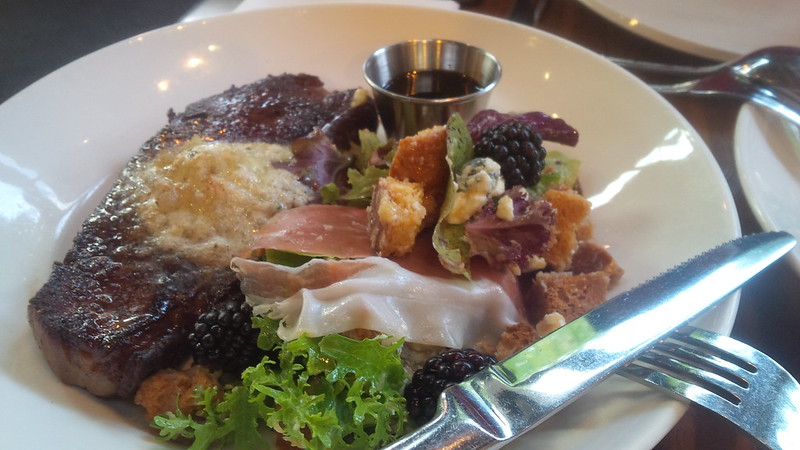 The desserts were also awesome 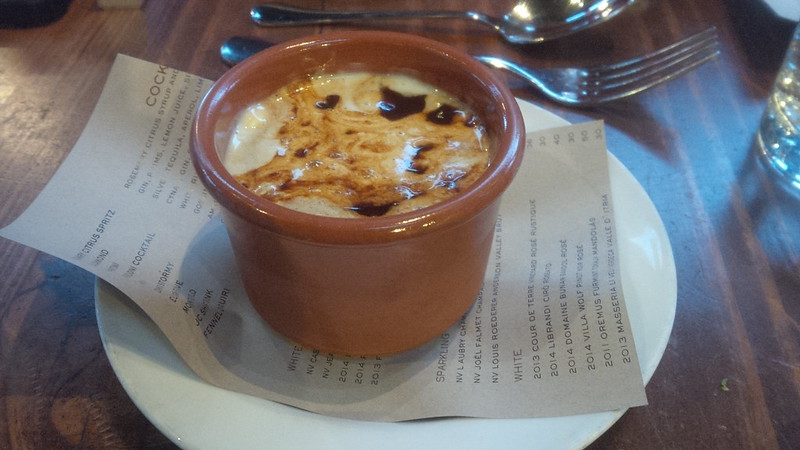 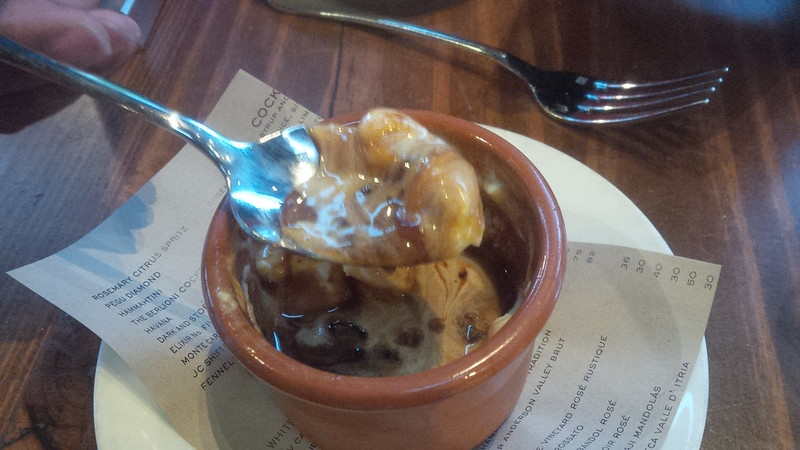 …and each had a bon bon. White chocolate. 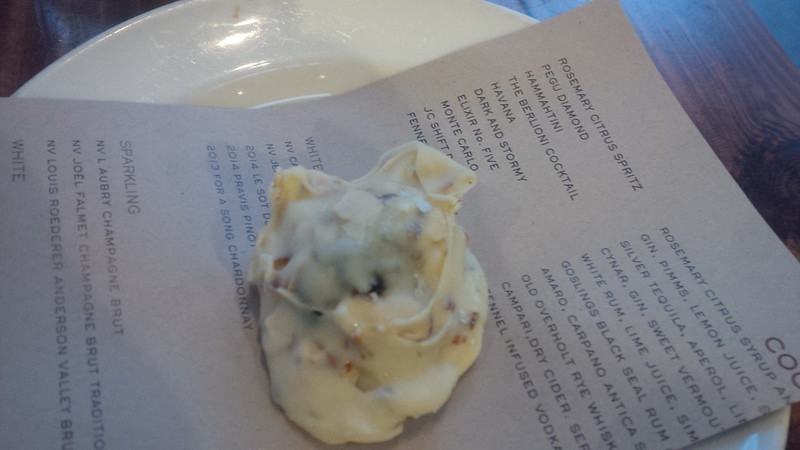 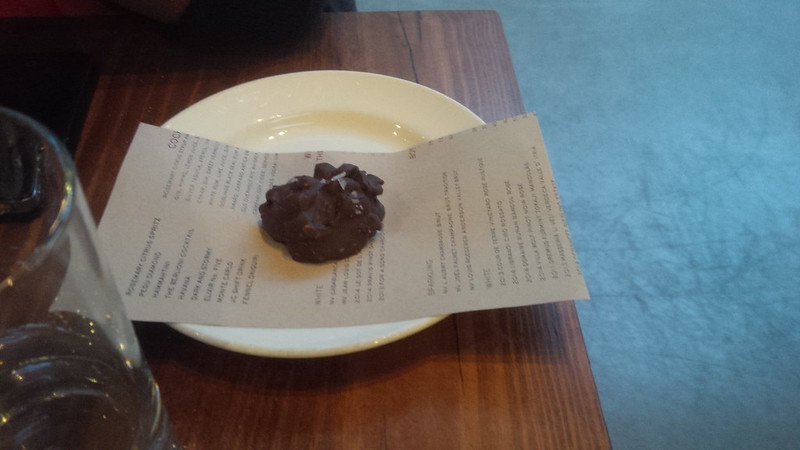 After a great meal, here’s a picture of us with Jenn. 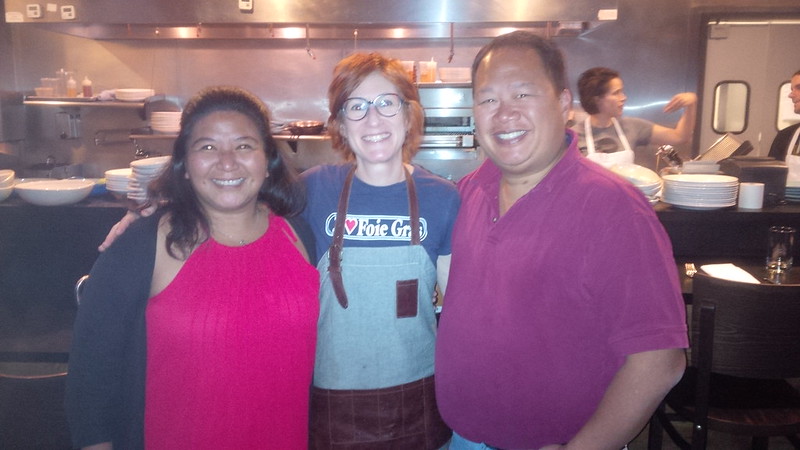 It’s good to get to know chefs because they’re a great source of information for places to eat when one travels. We talked about our plan to go to Vancouver on the way to Reno and Jenn had a few places to recommend in Washington and a restaurant to go to in Vancouver. She recommended a great hole-in-the-wall restaurant in Willamette Valley a few years back that had great food, so we took notes on the restaurants to visit on our Pacific Northwest trip.

We headed back to the hotel and parked the car with a 198 miles of range overnight. 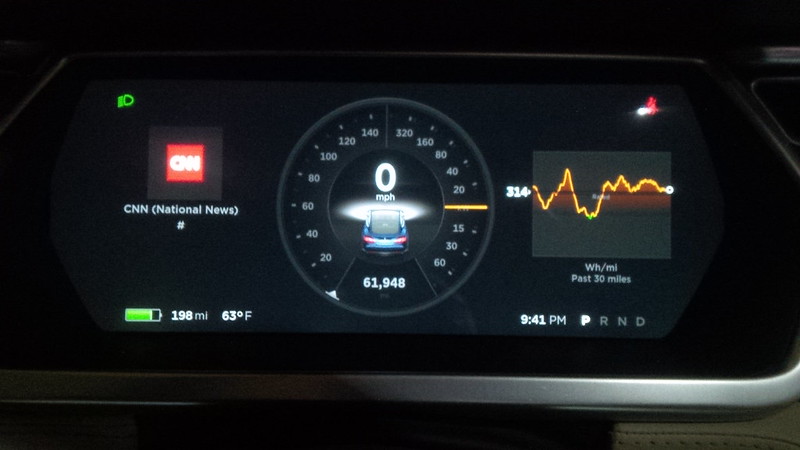 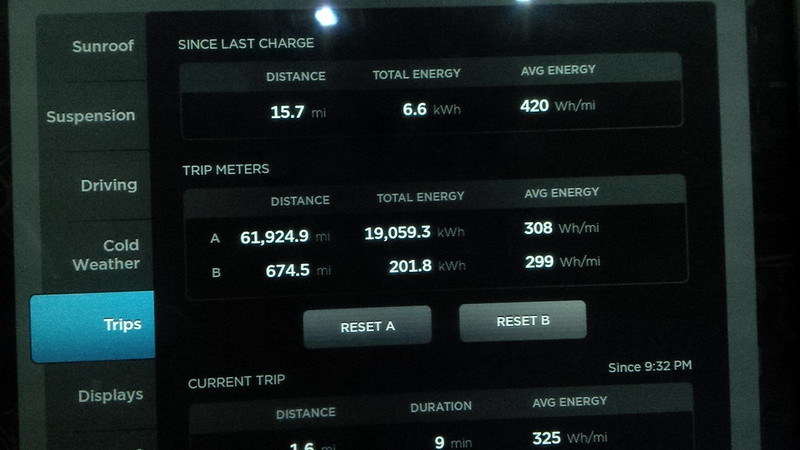 We had more than enough range to make it to our next supercharger stop at Centralia, WA tomorrow and headed back to our hotel room to rest for the drive to the Seattle, WA part of our trip.

It’s important to note that our Gigafactory invite would not have been possible had folks not used our referral code.  So, I have to thank those that were convinced to pick up a Tesla Model S or Model X and decided to save some money by using our referral code. So, if you’re as inclined as those that took us up on the offer, and in the market for a Tesla Model S or Model X, you can save $1,000 USD/$1,200 CAD/£750 GBP (and whatever the equivalent is in your market) if you use our referral code – http://ts.la/dennis5317.