After being in the Model S for 23 days straight on our Roadtrip 2015. I felt like it’s time to “shift gears” and write about the Roadster.

It has been a while since I’ve written (and ridden) the Roadster. 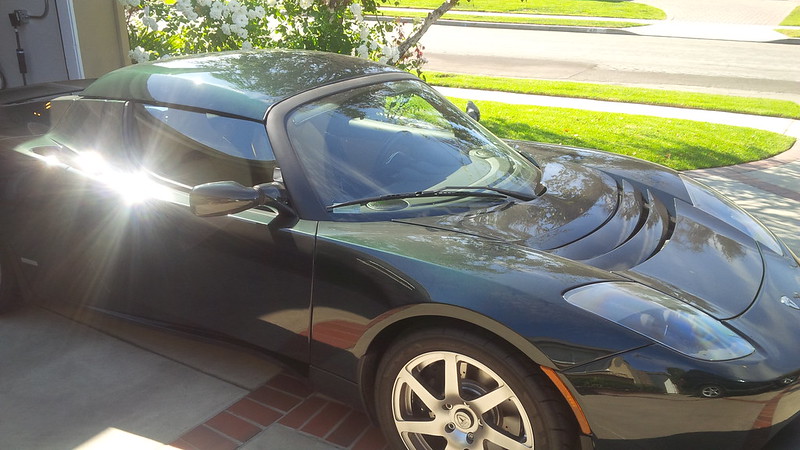 Soon after our return from our trip, I took the picture below, but I was in my “usual” seat in the Roadster – the passenger seat, or as I call it, Batman’s seat. 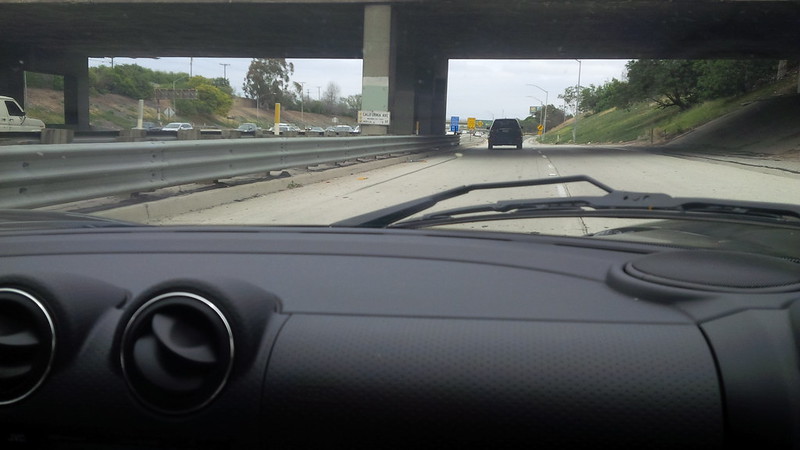 I had an appointment last Wednesday and asked my wife if I can borrow her Signature Green Tesla Roadster. We purchased her car under Tesla Motors’ original Certified Pre-Owned (CPO) program. With all the hoopla over the CPO Model S program it’s important to note that it isn’t their first CPO Rodeo.

As I understand it, the current Model S CPO program adds another 50,000 miles and 4 years to the warranty of the vehicle at delivery. The Roadster CPO program is 37 months and 37,000 miles from the car’s delivery to the CPO owner. They chose the Roadster numbers to be one more month and 1,000 more miles than when the car was sold brand new. The Model S warranty is an improvement over the Roadster’s CPO program In that you get 23 more months and 23,000 more miles, however the CPO Model S warranty is similar to a new Model S warranty in that Tesla warrants it for 50,000 miles and 4 years. The battery warranty on the car is lock-step with the drivetrain warranty of 8 years and infinite miles (for 85 kWh cars, I believe that it was 150,000 miles for 60 kWh versions.) It is important to note that Tesla remains consistent with its own practice of not including any battery degradation in its warranty.

Unlike its competitors at BMW and Nissan, Tesla does not warrant the pack to maintain a certain level of use for a certain amount of time. This issue continues to be one of the things that I find irritating with Tesla. Granted, as others have found, the degradation seems to stabilize after 30,000 miles our max. range on the Model S has stayed firm close to 255 rated range miles (a ten mile loss from factory pickup, the Model S community reports its range loss in rated range miles) and our Roadster now is consistently around 179-180 miles of ideal range (the Roadster community reports its loss on ideal range vs. rated range, go figure.) Our current ideal range numbers is actually an improvement from last July’s Roadster Battery degradation panic (Post 1, Post 2, Post 3) where the car was reporting as low as 172 ideal miles range that improved to 175 after a few weeks of testing.

I wanted to compare and contrast my experience while driving the Roadster and broadcasting the experience on Meerkat and Periscope. Being an active Twitter user, I’ve noticed the competition between the Meerkat App and Periscope. Each product brings live streaming to the masses via app extensions to Twitter. Furthermore, both applications provide realtime engagement between the broadcaster and his or her audience. I figured to experiment with this further and see if the previous test during our Model S Roadtrip 2015 cross country video has improved in a little over a month since I last tried it out.

My first streaming video experiment was on Periscope. Since neither app lets users store the video ad-infinitum, I stored the archives on Youtube.

Drive through Beverly Hills in a Tesla Roadster

We had some active users, and they were fairly engaged. Periscope overlays viewers questions on the video that the broadcaster sees and thus provided the broadcaster with the ability to verbally answer the questions posed.  When I archived the video, the questions and interaction disappears, so I transcribed it below. (no timestamps, you can see the logical flow for the folks that I did get to answer.)

@AdamClistWynant – Love the sound of the electric motor

@AdamClistWynant – How is your range?

@ILushYouM – I can’t wait to live in LA

@AdamClistWynant – In SD and LV

@AdamClistWynant – Go to Cafe Gratitude while you’re out there.

@AdamClistWynant – Have a good day. Peace

It was a fun few minutes of driving. However, I had to use Youtube’s tools to fix the “herky-jerky” nature of my hand-held filming of the event. (Not a steadicam operator.)

I did do a good job parking the car on the surface streets. 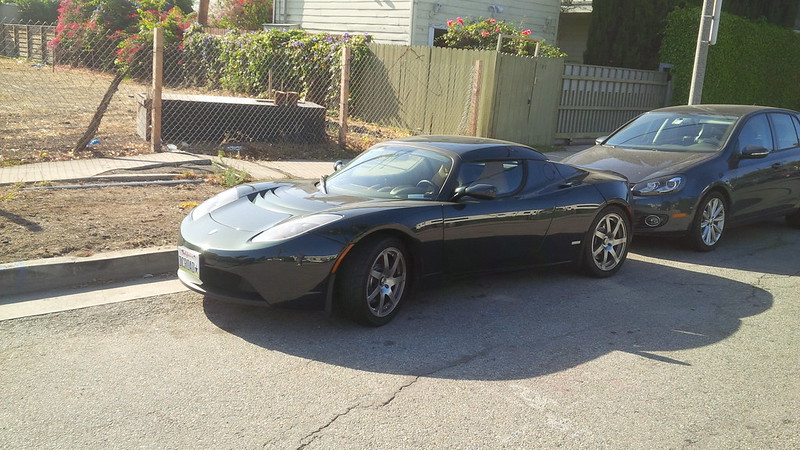 The next experiment was later that morning on Meerkat.

It is important to note that on Periscope, I had viewers pop in rather quickly. I gave Meerkat the same amount of time, and no participants joined the stream. So I quickly ended that session.

I was having some fun with the live streaming video thing that I decided to do another Periscope session, and again we got a bunch of viewers right away.

And again, I partially transcribed the questions on this short drive below. Now, I took the liberty of editing out the handle of a participant with a handle that others may find offensive.

@Unlock_Success – Hi from the UK

@f[edited]inglawn – Is that a Porsche Panamera

@f[edited]inglawn – I think I’m Behind You

@f[edited]inglawn – Oh Okay I see you

Later on the drive home in the freeway, I was behind a White Model S in the HOV lanes. Not on video, but always a fun sight to have in front of me. 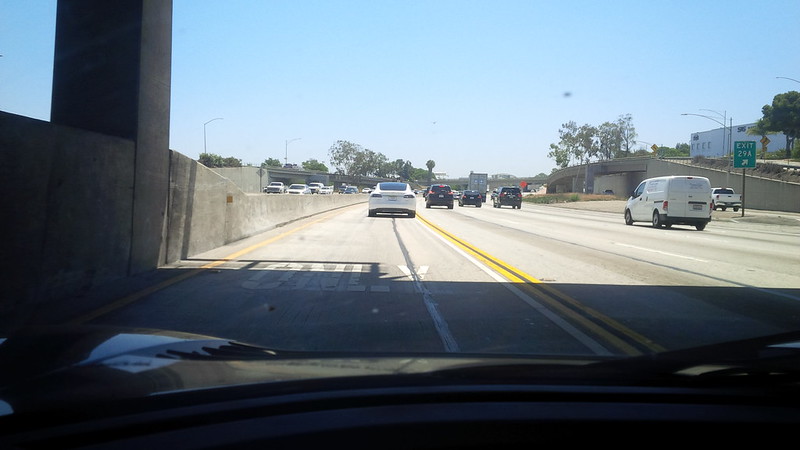 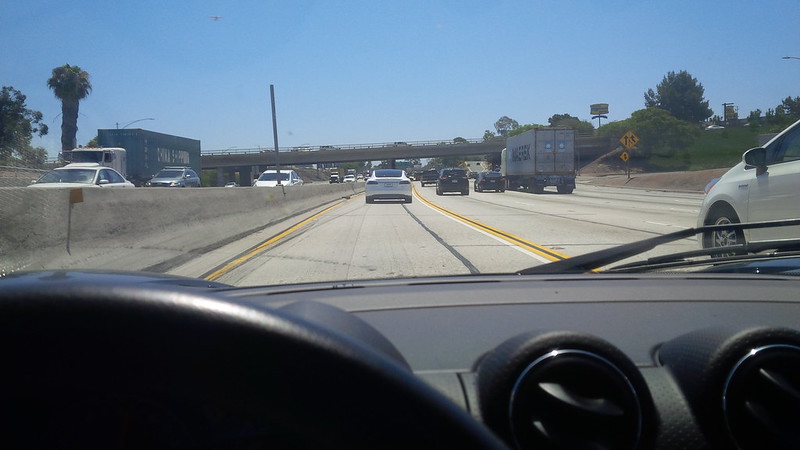 I wonder whether the driver noticed that another Tesla was behind him or her.

What can I conclude by this quick drive and test? It’s definitely a load of fun to drive the Roadster.

My other takeaway, on the live broadcast of streaming video front, at least for those that follow and find me in public, it seems that Periscope has more participants than Meerkat. I don’t know if Meerkat does enough to promote the broadcaster’s feed more or if there are more subscribers to the app, but it definitely is more fun and engaging to stream in Periscope.

As for the apps themselves, they seem similar from the broadcasting perspective and I would like to have the archive function allow the broadcaster to save the chat overlay with the video. In the meantime, enjoy the ride in the Roadster. I did.