So, we brought my better half’s Roadster in for its annual service .  Since we scheduled our service a while back, we were able to request and receive a loaner. Our first loaner was a regular P85 and it was a nice ride.  However, while the Roadster was in for service, the guys at the service center found an issue when the car was headed back to us after completion of the service.

Roadster parts and service is a little bit more of a challenge to Tesla than Model S service.  The issue with the car is still ongoing and the fault has been isolated.  In the meantime, the loaner will be with us a little longer than expected.  Having never experienced Autopilot as a driver, I requested a swap out of loaners to an AP enabled one, should the service center be able to accommodate.  A while after the request, and about a week after we’ve been driving a standard classic Model S P85, we got word from the service center that an AP enabled Model S was available for a swap, so I hurried down to the Service Center to swap out the P85 loaner for a P85D loaner. 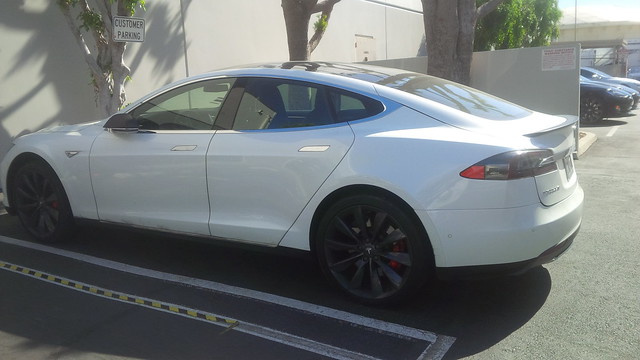 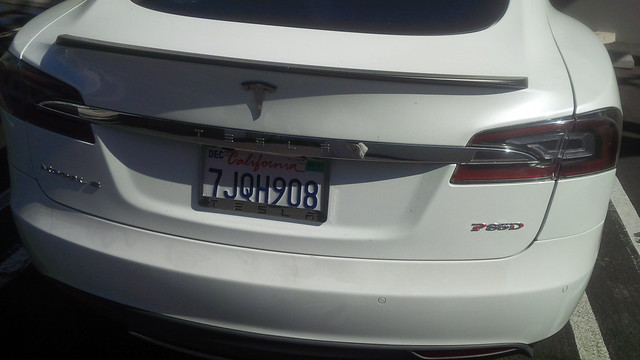 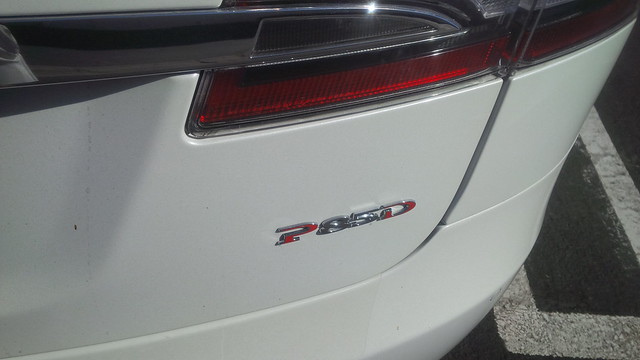 Not a Ludicrous P90D, but still insane. 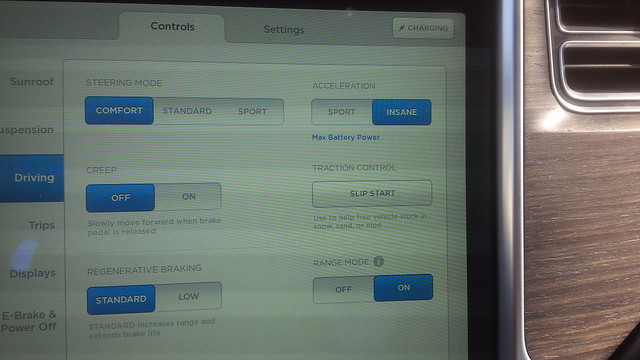 So, aside from auto pilot, we also got Insane.  I’ve been through a few Insane launches previously, so I didn’t really care to try that again.  One of the things that struck me with this Model S is the upgraded TPMS system that these newer Model S has.  Older Model S TPMS did not indicate the status of each individual tire pressure.  The Roadster does, but early Model S did not. 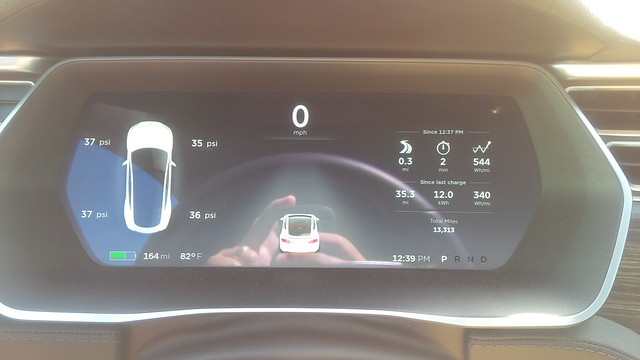 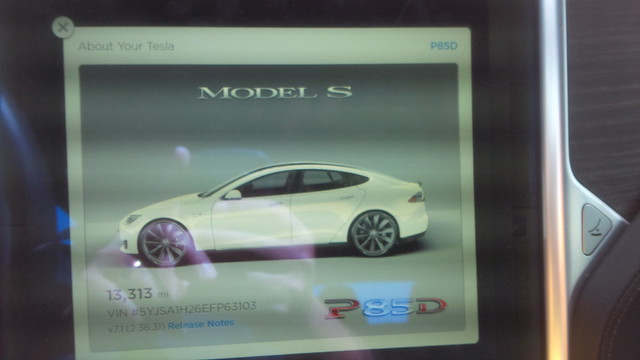 One of the best tests for Autopilot is in stop and go traffic and you can see this loaner handling that fine. 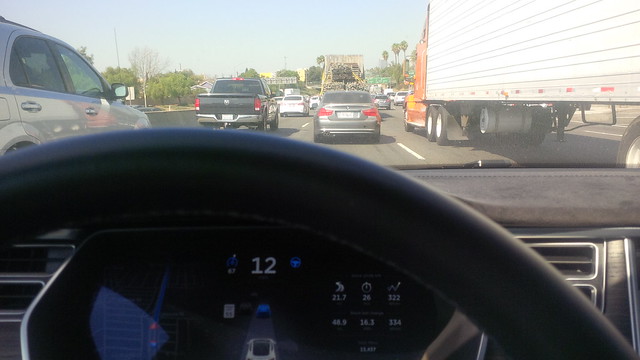 Speeding up when the traffic ahead starts to move faster. 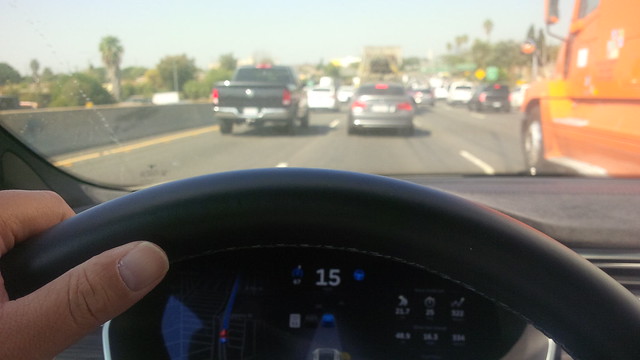 We took it out for the weekend.  Both the Tesla Owners Club of Orange County (meetup, TMC, or Twitter) and Los Angeles (website or Twitter) decided to go Apple Picking in Yucaipa.  We figured it would be a great way to try out the autonomous features and get some experience with Auto Pilot since none of our current Tesla cars have it.  We met at the Rancho Cucamonga Supercharger and left for the Apple Farm from there. 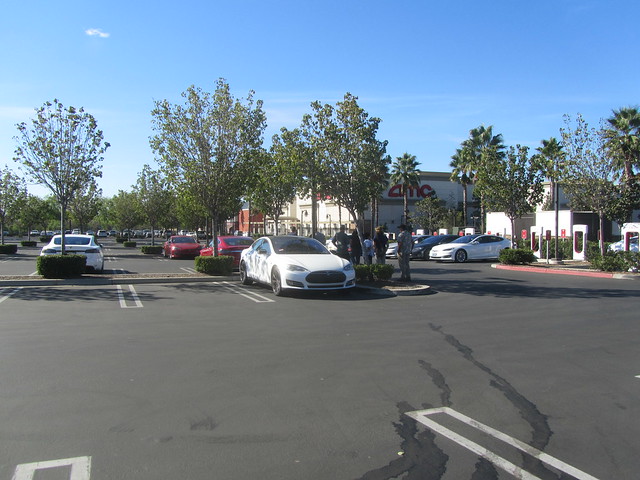 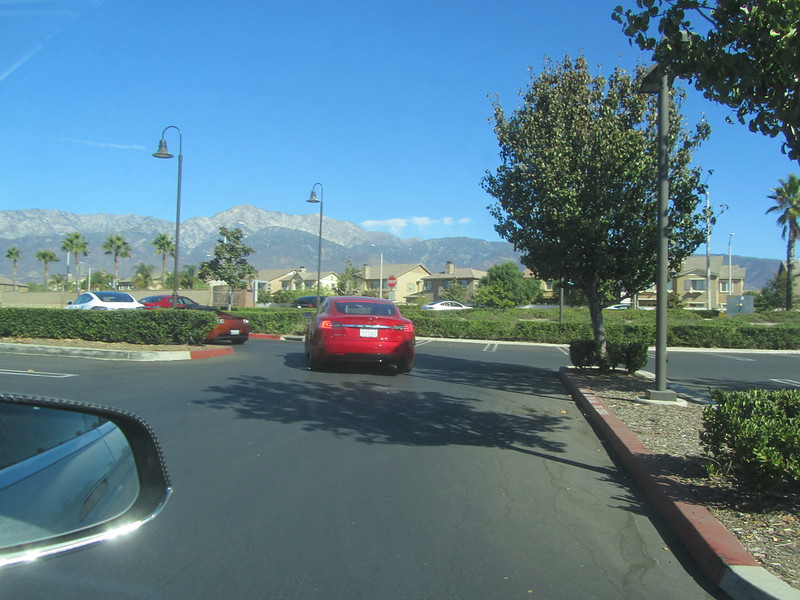 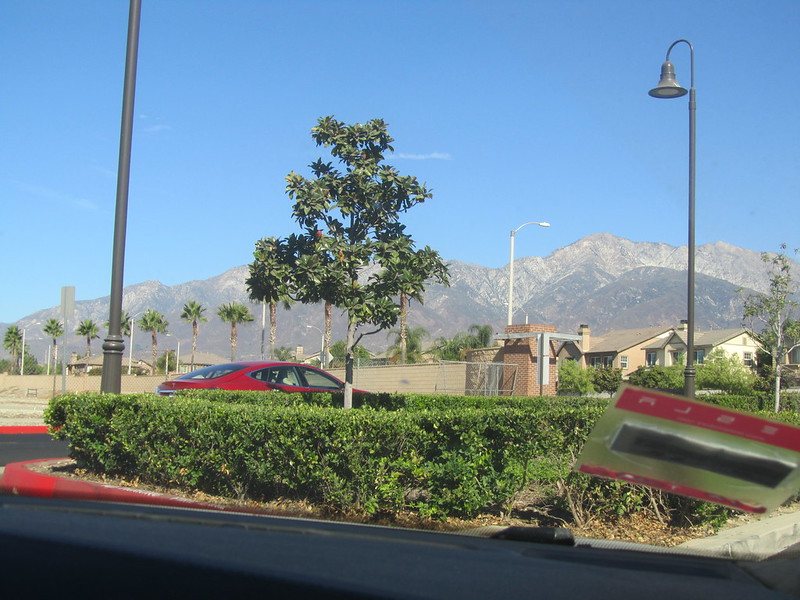 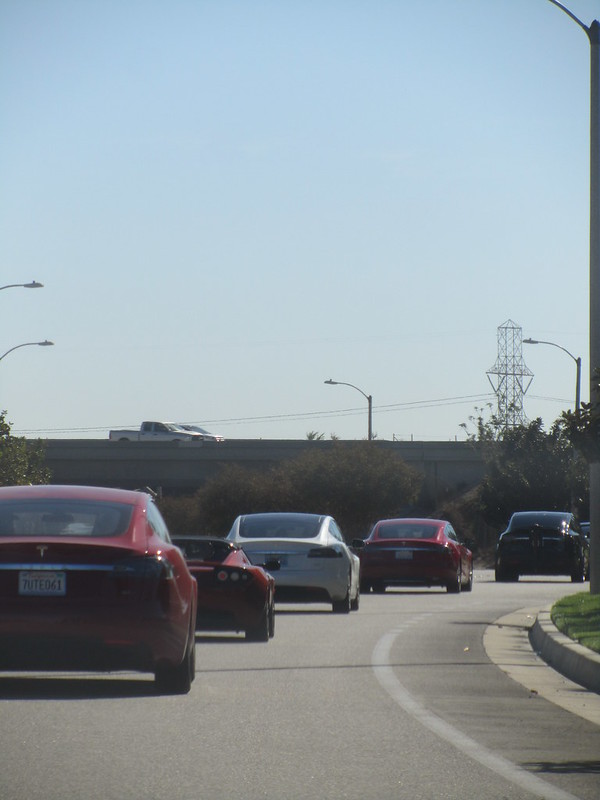 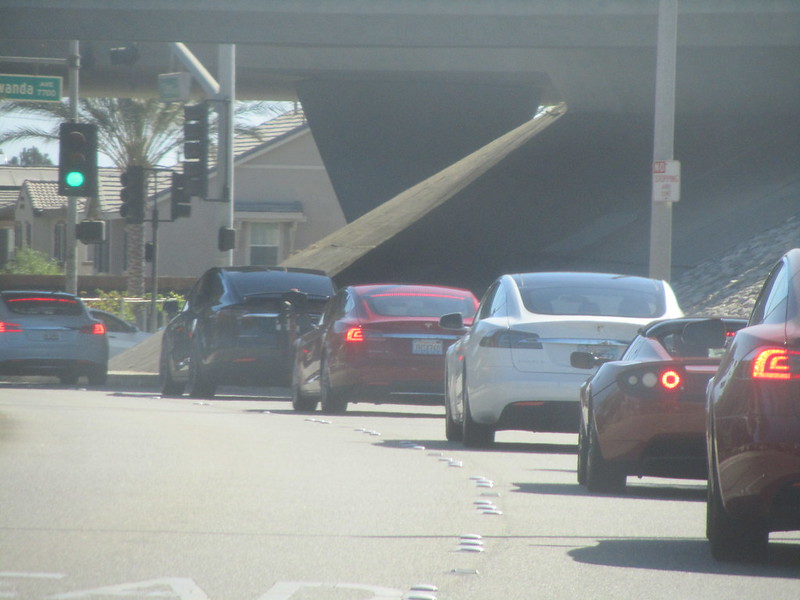 The caravan was fun, but we were in the back, and the group ahead of us got there a lot sooner than we did.

Here we are at the Apple Farm with the group. 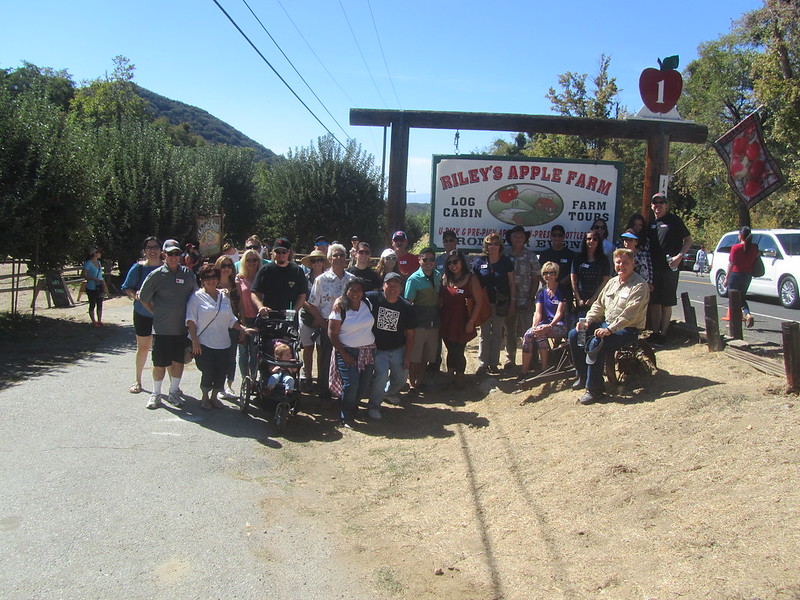 It was a great long trip to Rancho Cucamonga and Yucaipa.  The car performed admirably and I still was not as comfortable as others with the Auto Pilot.  It worked great, but I’m just too much of a control freak.  The car seems to sit closer to the right side of the lane than I do.  Either way, there’s a lot of coverage on AP and now that 8.0 is released and AP 2.0 is getting produced, I’m not adding anything to further the pro or con case for AutoPilot 1.0.

However, I can give some hints on what can be done should you encounter some trouble.  This is not an all-inclusive list, just a story of what happened to us and how we temporarily resolved it.

A few days after our club trip for Apple Picking.  Something distressing happened.  The drivetrain failed.   We were doing some errands locally.  I was making a left and had the PRND status on the driver dashboard go red, that was strange, so, I put the car on park, and the PRND status went to P.  I then switched back to D and it engaged.  Figured that this was a weird event, we decided to head home and swap cars.

Five minutes later, we were at a stop and the PRND status went red again.  Once again, I didn’t get a picture of the failure because of traffic.  Unfortunately for us, we were in Pacific Coast Highway at a stoplight.  Now this is a very busy road, and we were a little stressed at the speeds that people behind us were traveling before the stop.  We called Tesla Roadside Service to see what was going on.  Their solution was to send a tow truck to pick us up.  However, we were stalled in the middle of the street.  So, we called our service center and were advised to reset the car.  Now, it was too dangerous to get out of the car to do this.  Turning the car off would have turned off our hazard lights.

The service center had a novel and ingenious way of restarting the car to see if the car can fix itself.  While parked.  Brace yourself so that you can raise yourself off the seat.  Open and close the door quickly.  What this does is reset the vehicle.  The car went off and then turned back on.  Guess what.  It worked.  The drive train was able to be re-engaged.  We were a few minutes from home and were happy to get home unscathed.

Called Tesla back to redirect the tow to our home. 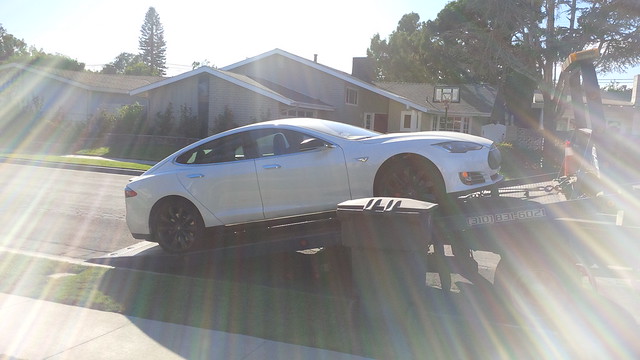 As with any Tesla, the car needs to be towed by a flat bed. 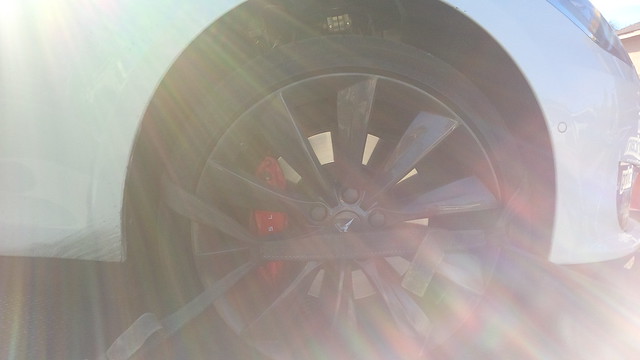 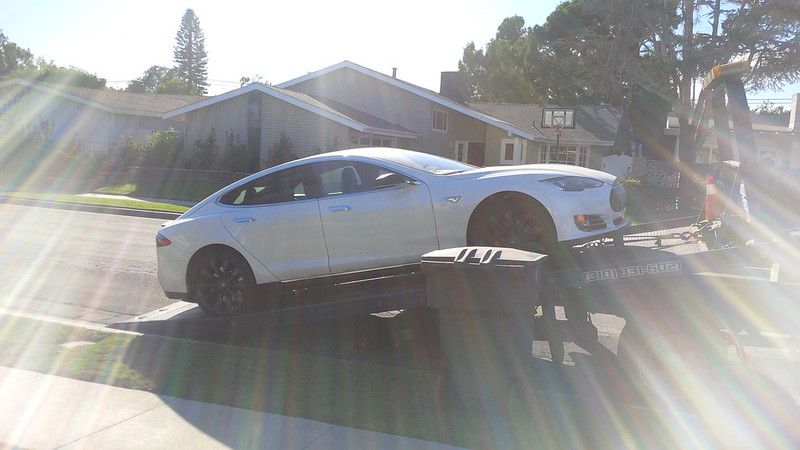 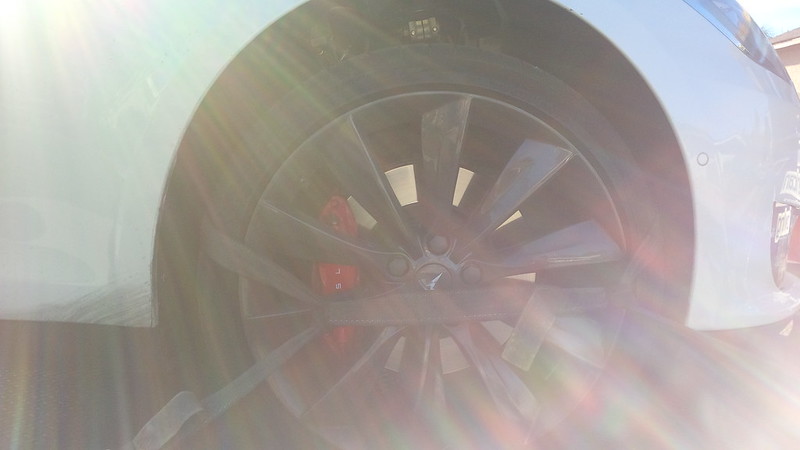 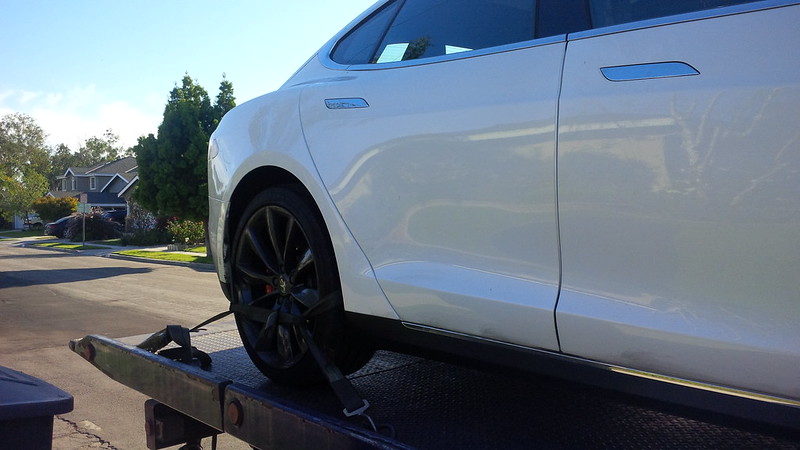 It was an afternoon in Southern California, during Rush Hour…  So, we spoke with the service center and they were able to get us a replacement loaner.  No auto pilot, but a nice Silver P85.  Here is the P85D getting towed. 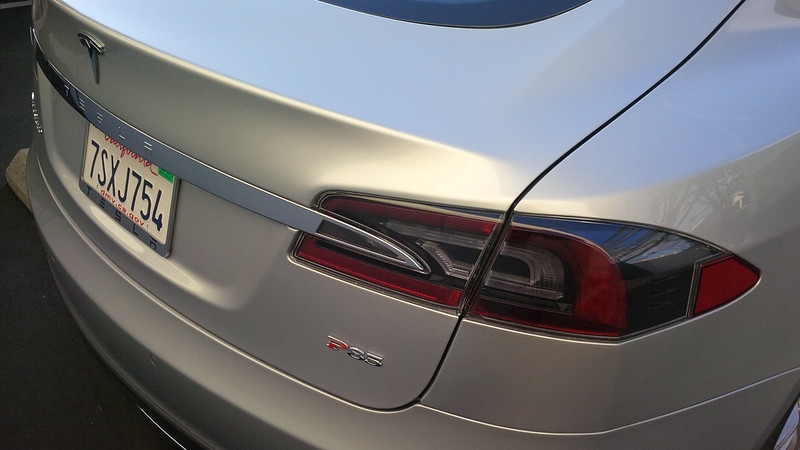 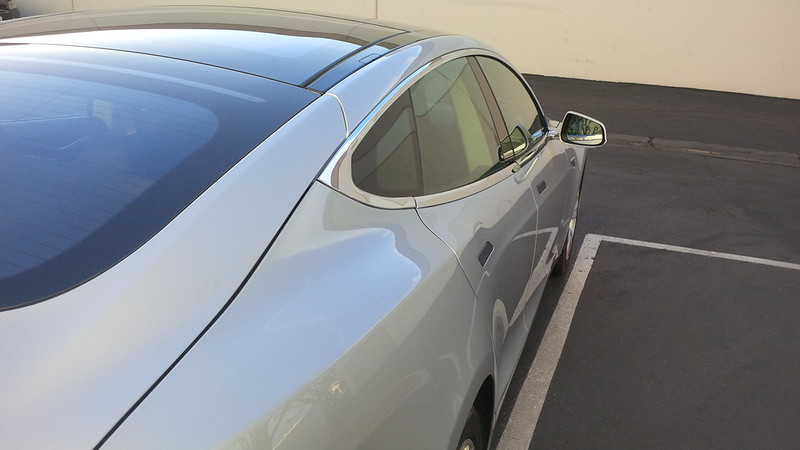 This loaner has the built in center console and I used to want one.  Now, I’m sure I prefer to have the open space. 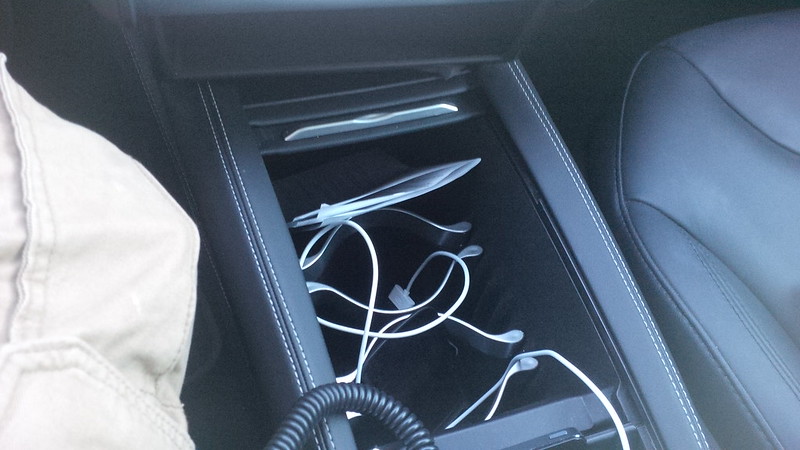 Bottom line is, the car is great, but if you ever find yourself in a situation where the drive train won’t engage.  Try a few things.

1) Put it in Park. (and then switch it back to gear.  This worked ONCE and wouldn’t again.)

2) Step out of the car and step back in. (or make it think that you do by lifting your bum off the seat, then open and then close the door.)  Car will go “off”. Then start the car as normal.