Most of this post’s observations were from the same day… One of the fun things about being a rEVolutionary in Southern California is the variety of EVs that I get to encounter.

Nissan Leaf, Chevy Volt, and Tesla Model S are by far the most common on my drives and I tend not to take photos of those… However, here are some of the few that are “Honarable Mentions” 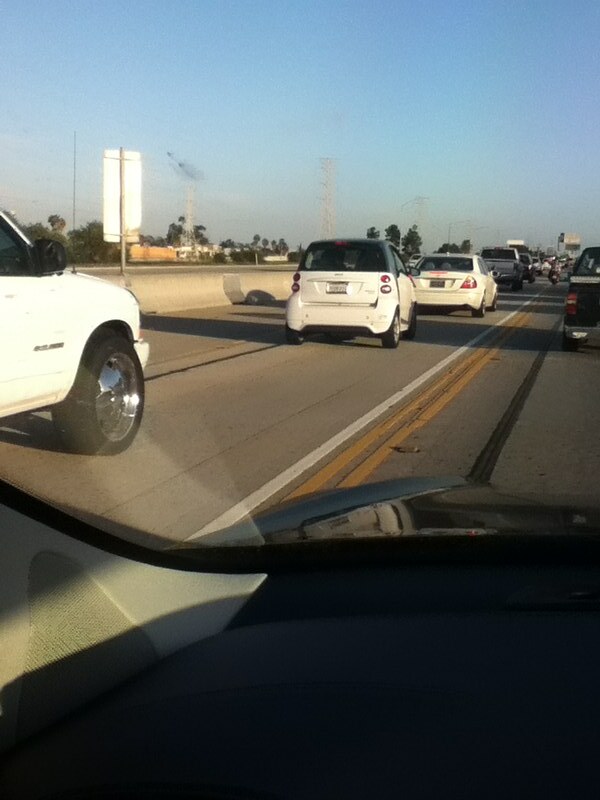 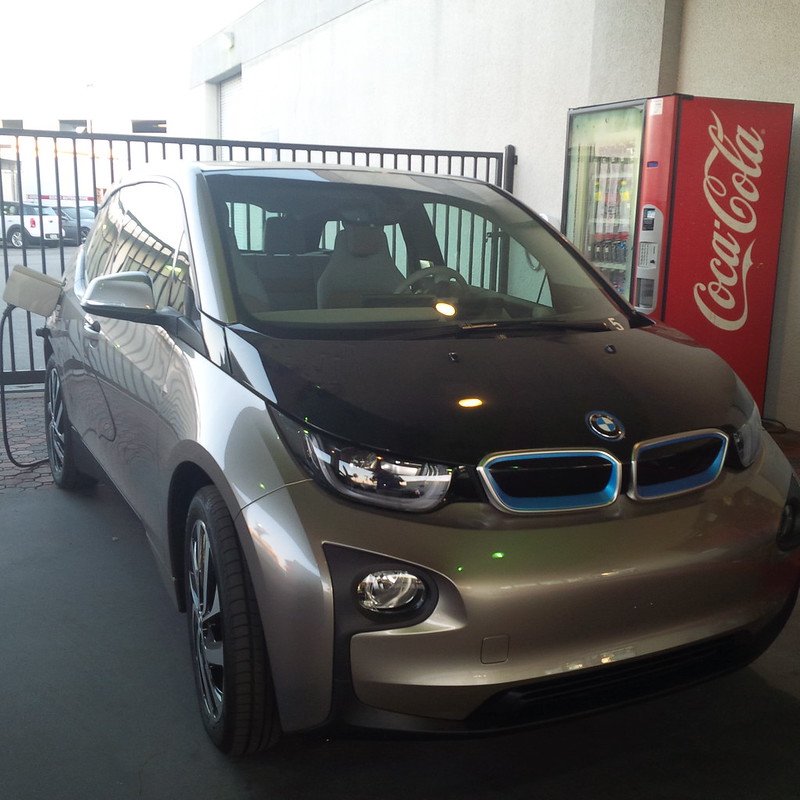 At a public charging station a little later, this was on March 25th, 2014. I went for a random charge station check (I like to try to populate my Model S map with charging stations). I only stopped for a few minutes, enough for the software to register the charging station as “good”. But I was excited to see this Coda Electric Sedan. 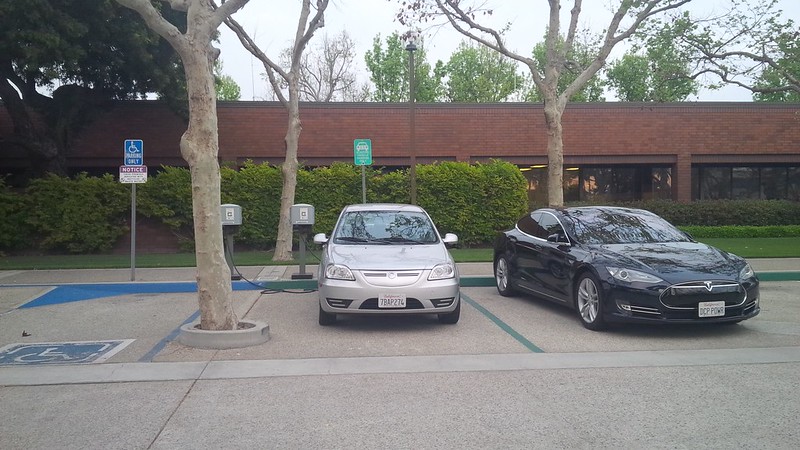 On Friday, March 28th on my way to the office after dropping my wife of at her work. Their parking lot now has at least one Leaf and a Volt that I’ve seen (aside from her Roadster when she drives it in.) It’s a cute little Chevy Spark EV. 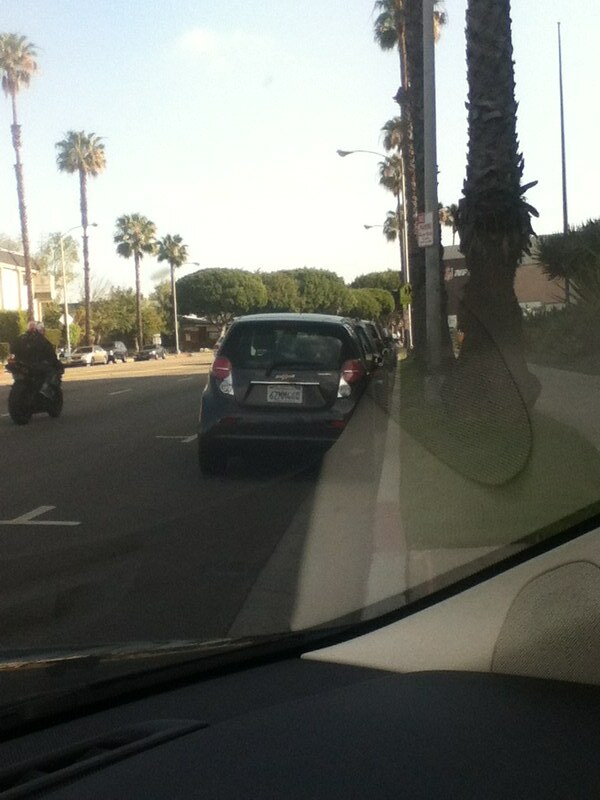 Since we carpooled that Friday, I decided to wait at Santa Monica Parking Lot 6. Basically, a charging mecca filled with 30A J1772 Clipper Creek chargers and I thought to see how filled the parking lot gets with EVs. The last time I was at this garage was on my penultimate day with my Active E (and yes, I still pout when I think of my Active E.)

Here’s my Model S parked on the sixth floor of the garage. The spots closest to the external staircase are where the EV chargers are for each floor (except for the first two floors, where they are all grouped together.) 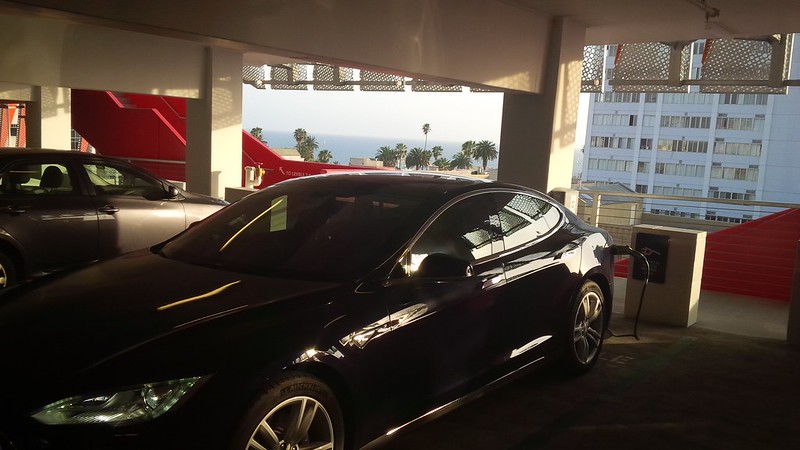 Love the view of the ocean from this high up.

On the Fifth Floor, there was a Ford Focus EV parked. 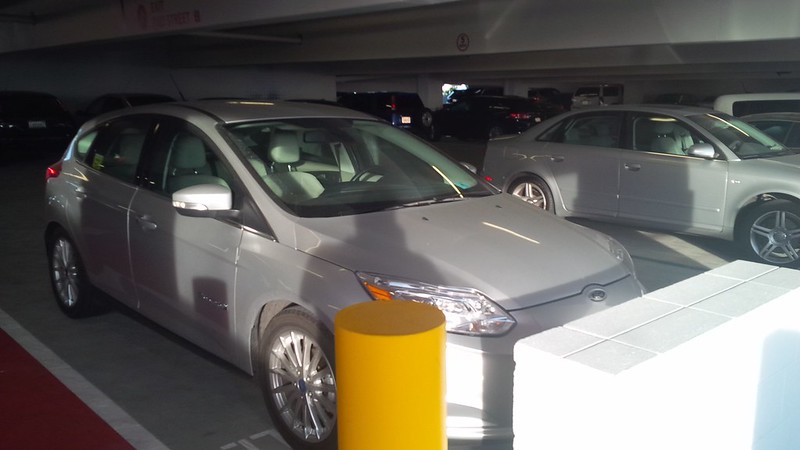 A little of the confusion in this lot is the spots set aside for EVs. 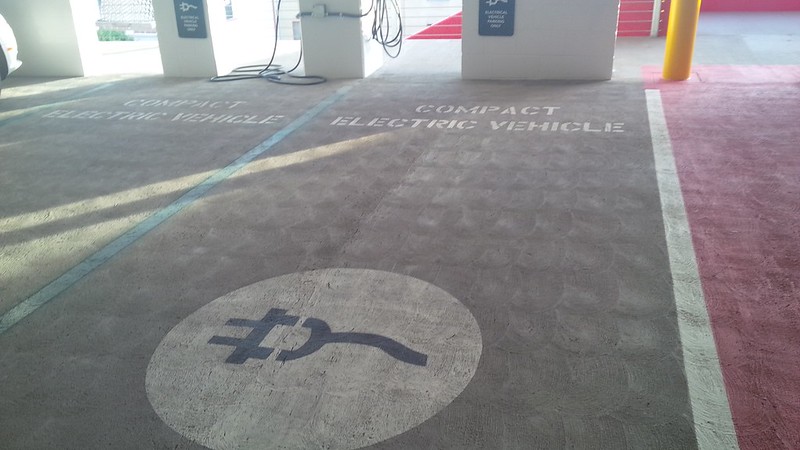 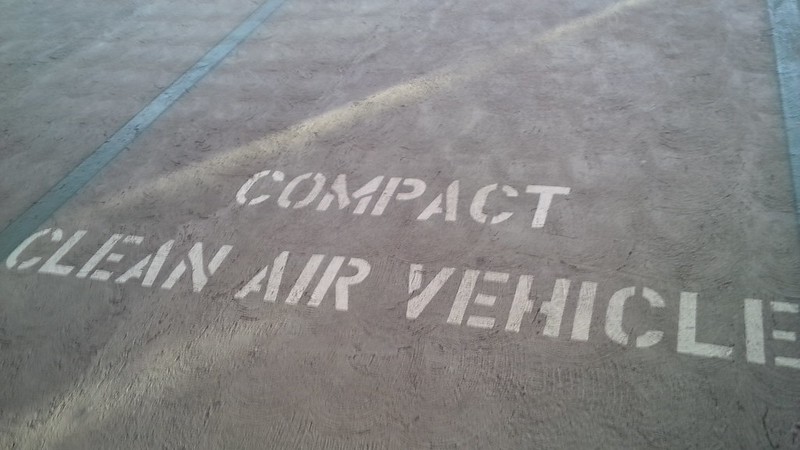 This is pretty confusing labeling and I wonder how Santa Monica enforces this. 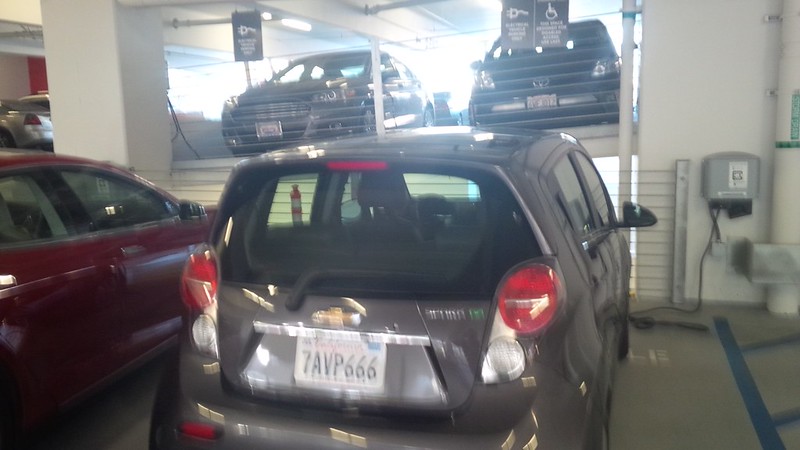 It was parked beside a red Model S, with the Fusion PHEV and Prius Plug In parked around the corner from it. 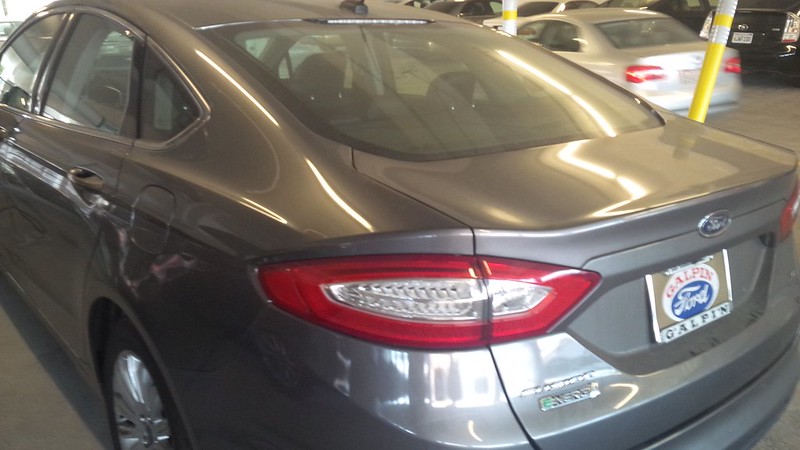 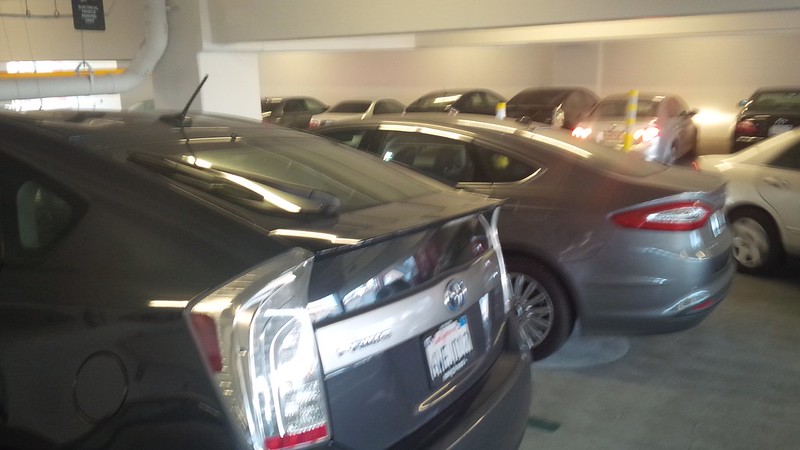 Aside from a few Model S in the garage, it would seem that the Fiat 500e count in this particular garage was quite skewed and interestingly enough, there were no Nissan Leafs parked at the lot. I did see one when I was exiting the lot. 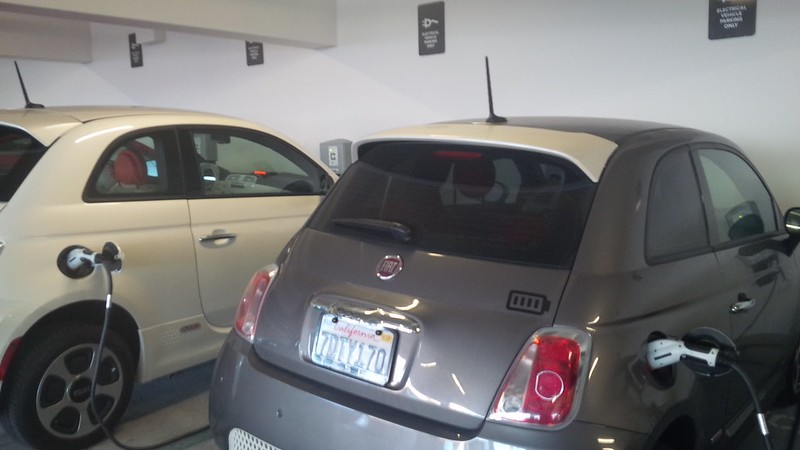 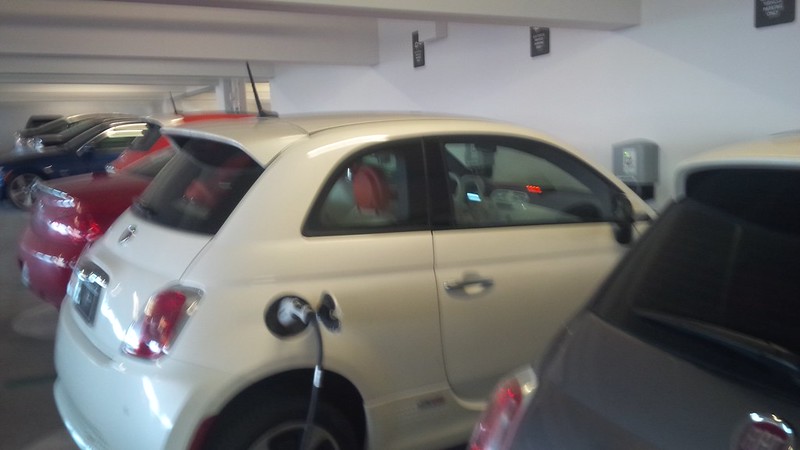 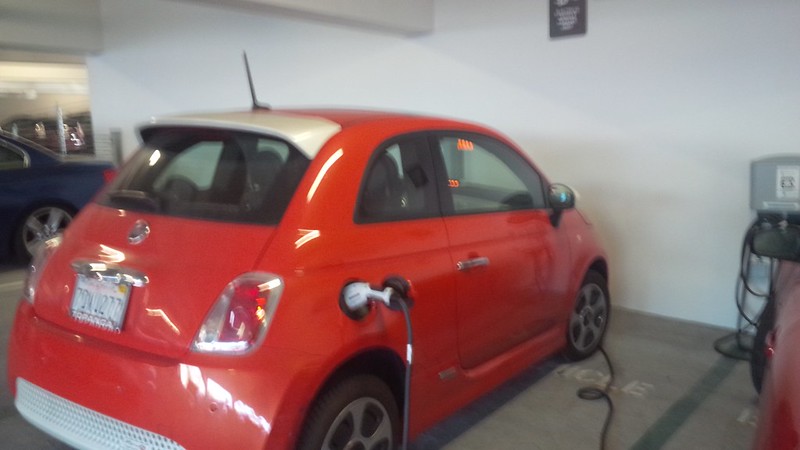 Additionally, there was only one Chevy Volt. 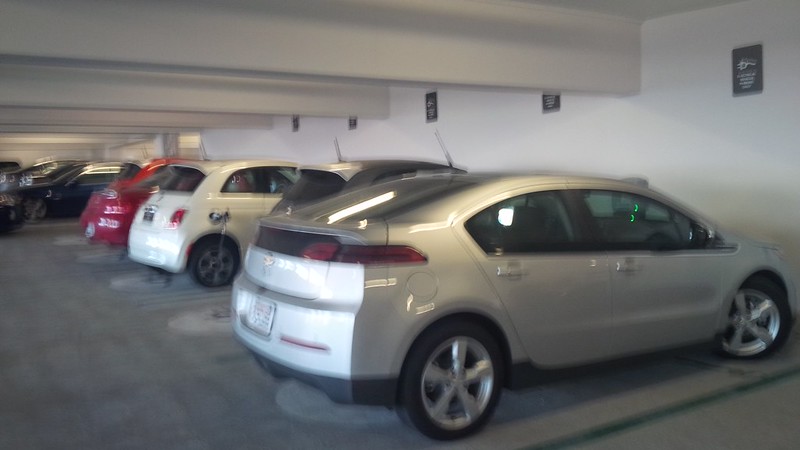 Things have definitely picked up around Southern California. I remember when I would run into people that I know at charging stations. More often than not, they’re mainly strangers nowadays. I guess that’s a good thing.

In flight and on my way home from a vacation in NYC and just figured That I have about eighteen days left to drive my ActiveE.  It’s a bit surreal. I drive too much to lease any vehicle and would have been crushed by the mileage penalty had the ActiveE not included the unlimited mileage option…

Still waiting on final word on what the i3 Electronaut Edition will look like, but just got the good news that my office move will give me the opportunity to install a NEMA 14-50 or NEMA 6-50 outlet in my parking spot.  I feel privileged that my CEO approved this expense, but note how silly certain locales are at thinking about workplace charging. Barring any local city ordinance, I should get the NEMA outlet installed before we move at the end of the month. As long as the electrician filing the paperwork specifies that it is just an outlet we should be good. The previous landlord (and location) had tried to install two Chargepoint EVSEs last year, but backed out when the city ordinance required a separate feed from the utility for the additional 60 Amps that EVSEs would have drawn (and thus cost prohibitive). To compare, this change in civic requirement increased the outlay from the landlord from around $10,000 to approximately $30,000. The NEMA outlet will cost around $1,000 because of the length of the cable run AND allow for 40A charging (for vehicles that support that).

Using my converted Model S MC that TonyWilliams converted for me (now called JESLA) I will be able to charge many J1772 EVs at the office In my own parking spot. I know for a fact that aside from either Tesla (Roadster and Model S), I have been able to use the JESLA with my ActiveE and my Mom’s Nissan Leaf. Additionally, TonyWilliams modified the Tesla Model S MC to work with the 2nd Gen RAV4EV.

Basically, having access to workplace charging (in my own spot) will free me up again to look at my commuting EV options. If I go i3, I’ll be able to go pure BEV. Though, the REX will probably add to the resale value of the vehicle. I can go Fiat 500e and not worry about it or perhaps babysit my mother’s Leaf when she takes a vacation. My EV friends in Europe often charge in what they call “dumb” outlets up to 32A and that’s basically the freedom I get with the JESLA and a NEMA socket. Having communicated with fellow ActiveE high miler Todd Crook, I am tempted by the unlimited mile lease he has on his 2nd Generation RAV4EV purely based on economics. The better half doesn’t like the car. If my number gets called for the Honda Fit EV unlimited mile deal, that would also be as tempting. Though my old brand loyalty to Honda can reassert itself. Decisions, decisions.

So, on the 24th of February, 2014, the day after my ActiveE is ripped from my hands, I start my new office location with an outlet that would’ve been a lot more convenient than my 3/4 of a mile walk to charge. That’s the kind of irony that is worthy of Beckett, in fact, I would label that closer to absurdity. Additionally if I decided to skip other EVs and stick with the Roadster for the better half and Model S for my commute. I really won’t need to plug in all the time… But, could keep the Model S on 50% daily charges so that I can maximize battery health. It’s a wild, wild concept.

Stay tuned, dear reader, ’cause I don’t know what I’m going to do…