A week ago was a rite of passage for my EV ownership experience.  (Not that I’ve driven any longer than my first weekend with the Model S  that I wrote about on my blog a few months ago (start here).)   The first was our Model S just passed our Roadster for total miles on the odometer and the second is the somewhat of a Southern California driver tradition to “drive to Vegas” as a young adult.  The Sin City drive is one that a lot of my contemporaries did as they turned 21 and most still do.  As I’m not nearly as young as I have been, this was a trip I normally would have taken an airplane to, after all I’m about 300 miles from home to Las Vegas.

With some published reports of all these new chargers installed on the Las Vegas Strip coupled with hanging out with more environmentally conscious folks have provided me with a little bit of eco-conscience, so, I figured to try driving EV all the way to Vegas for this conference.  Besides’ there is nothing that convinces a Southern California driver more that a vehicle is a worthy one than a positive answer to the question “can I take the car to Vegas”.

Basically, yes… You can take it to Vegas, and refuel in Barstow (like most do). However, your “fuel” is free, courtesy of the Tesla Supercharger installed there. So, drove about 120 miles to Barstow with some wicked elevation changes that was the draining part on the battery.

Barstow supercharger pictures in a beautiful sunny day in the California desert. The location in Barstow, was tough to find, it’s behind the Chili’s Restaurant and beside a hotel. So, if you arrive there during a meal service, pop in and have something to eat.

Since we did this drive during the day, we got to see the new Solar Plant that was installed on the California side of the border with Nevada. It’s a cool side-note to see the installation of this facility. The last time I did this drive was approximately two years ago and did not notice these plants the last time. 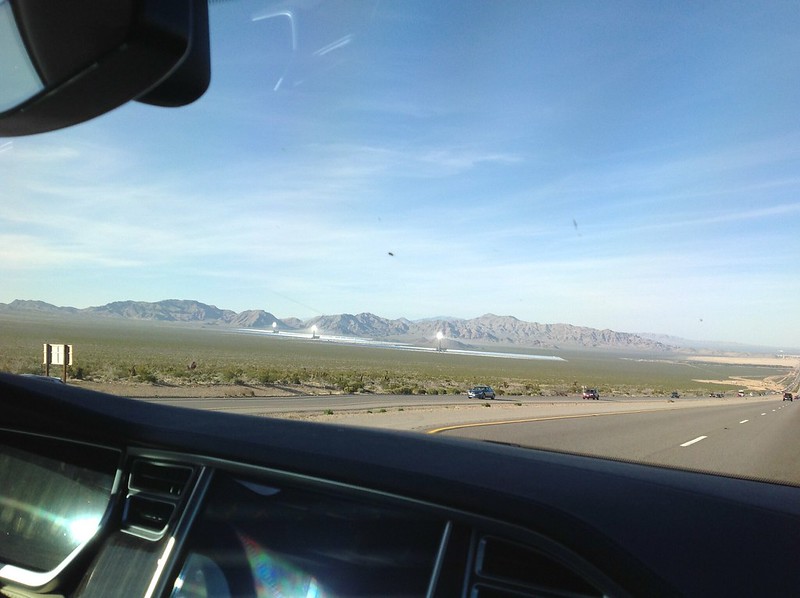 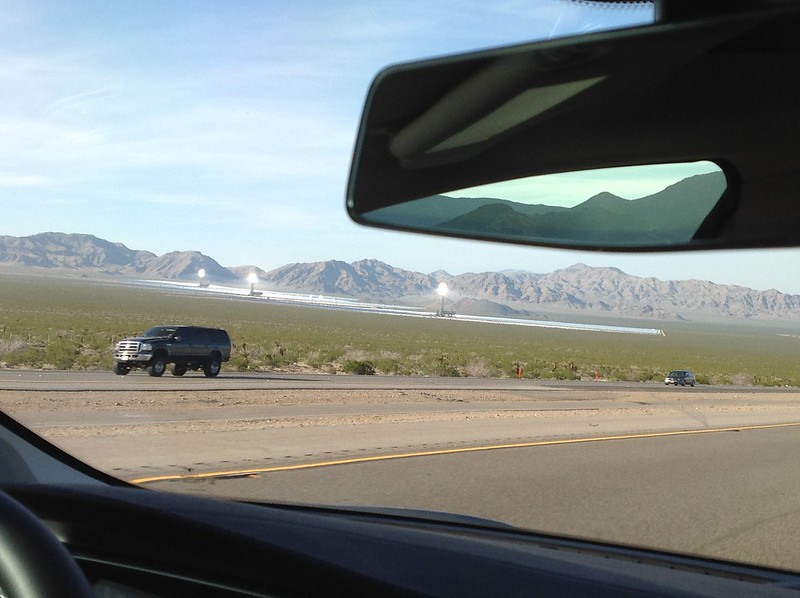 We arrived in Vegas after another 160 mile drive with even more wicked ascents (with consumption above 530 wh/mile) with corresponding descents that recovered some of the charge back with the regenerative braking.  My back of the napkin calculation had me lose about 30 miles of range on the ascent and recover about 10 miles on the regenerative braking.

The superchargers in Downtown Las Vegas was in a covered garage in a commercial part of the city.  No casinos close by, so saved money by not gambling. Here are the stats for the LA to Vegas portion of the trip. We decided to supercharge in Downtown Las Vegas because we arrived in town with only eighty miles on the tank and several days of Vampire Load ahead of us, figured to get some charge back into the car and let park the Model S unplugged at self parking.

On the first day of check in, I didn’t notice that I walked by a construction site that was installing two Chargepoint J1772 EVSEs at my hotel.  I was aware that Valet Parking had NEMA 14-50 outlets installed which are ideal for Tesla Roadsters and Model S to charge with (as well as any standard EV that decided to purchase a portable EVSE with this capability).  However, I decided to park in self parking when we first checked into the hotel.

On the second day, I had to get something from the car, and noticed the construction site  that I obliviously walked right beside the previous day and took some quick snapshots of the installation of some new Chargepoint CT-4023 dual head/single circuit 6.67kw shared J1772 chargers. I remember reading about these new chargers from Chargepoint and this display clued me into the fact that these newer Chargepoint CT4000 series EVSEs split the power from 32A to 16A when both ports are used.   In my experience, the older dual head Chargepoints, the power is 30-32A to each port. The next day, I decided to contact Aria Guest Services to see if I would be able to use the chargers and were told that I may.  On my way to move my Model S and plug in, I met with the Manager for High Voltage services (in their Facilities group) and was in charge of all the EV facilities for the resort and he mentioned that he had a lot of NEMA 14-50 installed in Valet Parking for EVs to use.   Most folks that pack their own NEMA 14-50 drive Teslas (Roadsters and Model S use the same port) or use the modified ones from Tony Williams (the JESLA) and now with the release of the Clipper Creek portable EVSEs, other EV drivers can as well.

Since I’m a geek, and more importantly an EV geek, I figured to provide some assistance with testing out these Chargepoint stations.  I first plugged into one of the units at full 30A draw and got GFCI a few minutes later.  I moved the vehicle and plugged into the other one, and got the same error.

I decided to do something that Teslas do well, but other EVs don’t seem to have readily available and drew down my Amperage request from less than what the pilot was sending.  I started the draw at 16A and the EVSE began to work.  It projected an eight hour charging session.  So, I decided to kick it up to 24A and that continued to work.  After I had successfully started the charge at 16A-24A, I did what any responsible EV driver should do and added the station on Plugshare.

After my last meeting, but before the end of my charge station, I decided that I’ve had enough of being in one resort for a few days that I took the car out to see the rest of Vegas for my third evening in town.  When I got back to the car I noticed that the car stopped charging and had a Red Fault on the unit and not just a soft GFCI fault (as was earlier) so I reported the fault to the Aria Facilities Manager.  I gave him my telephone number.  I also gave him as much detail as I could and went to the rest of the town.

One of my other stops in my Vegas trip was to have dinner at the Wynn Hotel and Casino because I figured that the food would be good.  Additionally, it was reported that the Wynn Valet would also charge any EV as long as it had a J1772 outlet.  Luckily the Model S has an adapter for this and I decided to try them out.  One of my favorite games to play with the Model S that the Active E didn’t do was collect “charging spots” on the Navigation.  The Model S will put a dot on your Navigation map in all the spots that the car has stopped to charge.  It also will store the profile of the type/speed of charge that it encountered at that location.  I wanted to populate my Model S visited chargers map with multiple locations in Las Vegas and the Wynn did not disappoint.  Though the chargers were J1772, they were full speed 40A ones that would help higher charge vehicles such as the Model S, Roadster, and 2nd Generation Toyota RAV 4 EVs.

While I was out and about in Las Vegas, the Aria Facilities Manager called and told me that both he and Chargepoint needed to do some further testing and repair of the J1772 chargers in Self Parking, and advised that I should use the Valet parking facilities instead.  On the wire side of the chargers, he was seeing some “noise” and needed to isolate and clear it so that the Chargepoint chargers would be fully operational.  Since we were leaving for home the next day, and wanted to maximize my charge, I did as he requested and parked the vehicle at Valet Parking.  The attendants at the Main Valet knew of the Model S and asked if I had my charging bag in the car and I replied affirmatively.  I didn’t actually park and charge the car myself, so I took screen shots of what my Tesla App showed. After (Max charge ’cause we’re driving home on checkout) Apparently the Valet Parking is directly underneath the main casino complex. The last day of the conference was just a morning session, so around noon we left the resort and headed out of town.  Since this was a travel Wednesday, decided to take a slower pace home.  Stopped off at a few casinos that had no chargers (and thus won’t get a mention here) then made the “run to the border.”  Both Chargepoint and Plugshare identified a 30A charger at Whiskey Pete’s at Primm, NV.

It was a legacy CT2000 Series dual head J1772 charger at 30A a side with the B side as constantly reported as “failed.”  I was lucky enough to have been the only EV around, so I took the port and charged up the car for the drive home. 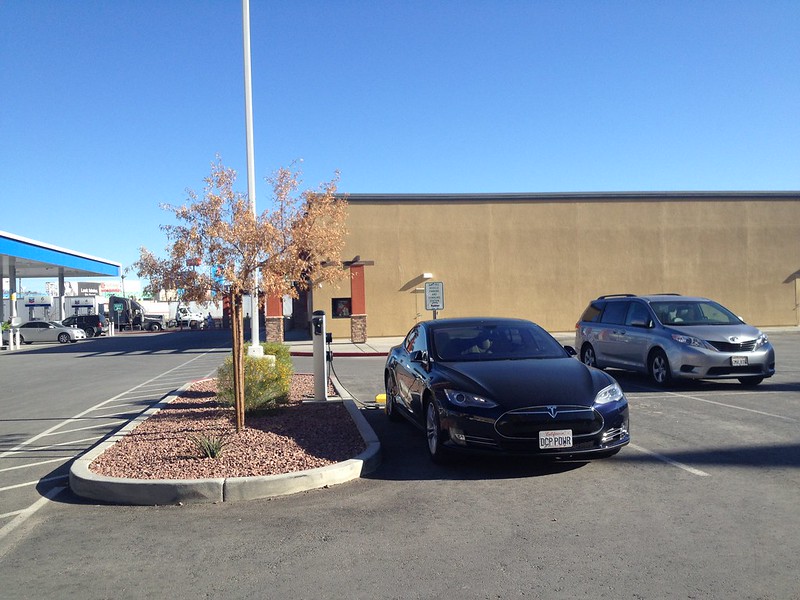 The irony of having a Chargepoint charger located right beside the gasoline (petrol) station was not lost on me, and I took this shot because it illustrated this best. 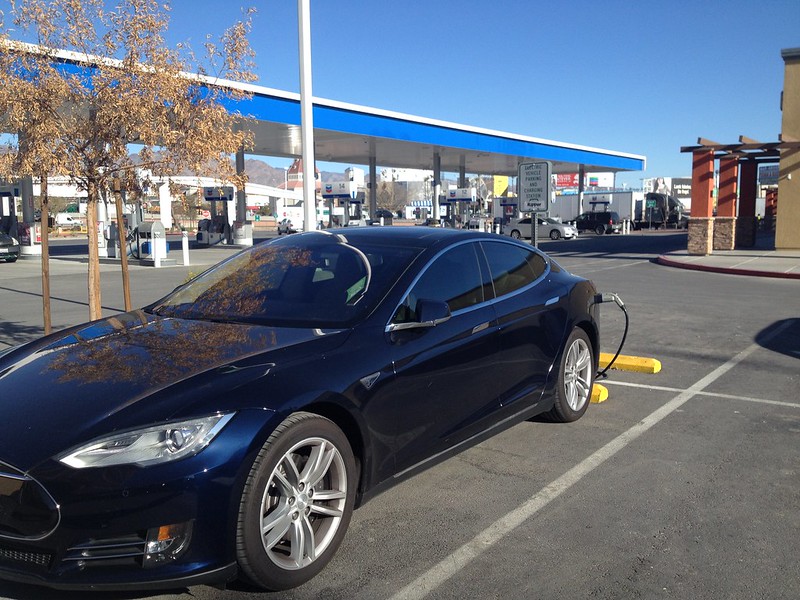 It was interesting to note that our rated range was within five miles of our home from the time that we left the border. Understanding the elevation changes ahead of us in our trip coupled with my lead foot we made the decision to stop at the Barstow Supercharger again.

The speed of the charge was enough for us to do a quick stop so that we can continue quickly. 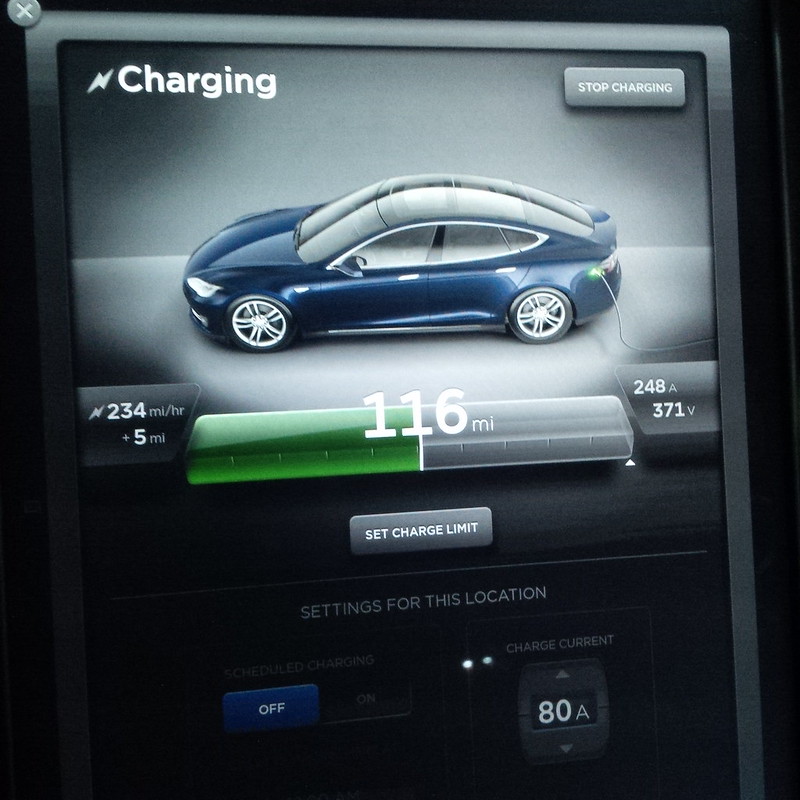 I tweeted this picture commenting how nicely the darkness makes the Model S look a lot cleaner than it actually was. 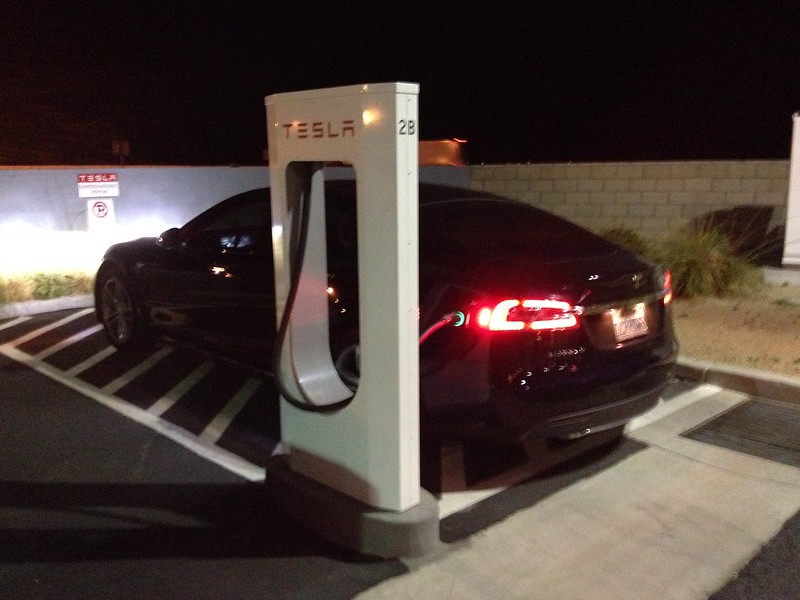 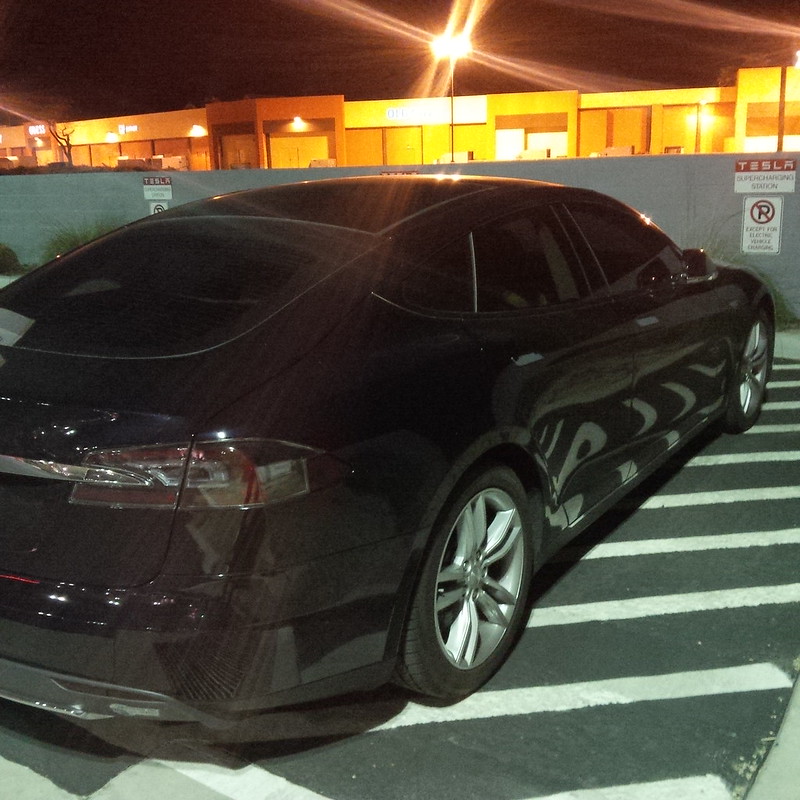 Our stats at the return stop in Barstow. 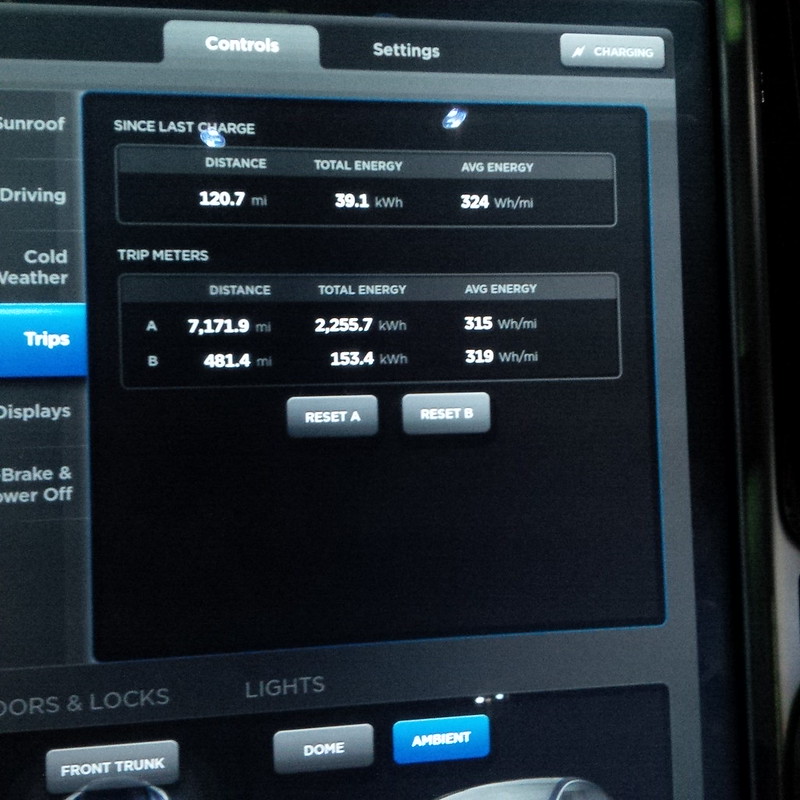 We headed back home from Barstow and the descents were definitely more than the ascents on the way to Vegas.

Our ending stats for the entire trip. 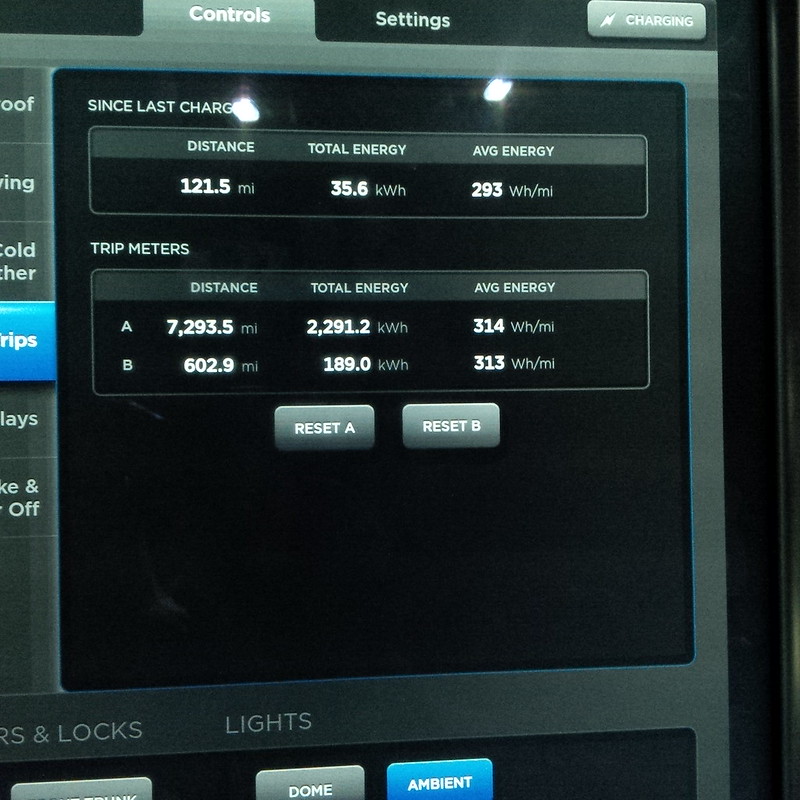 So, the Southern California native typical question of “Can you take the car to Vegas?” is a resounding “YES!” and the fuel cost is $0.