So, you probably were wondering why I haven’t been posting much lately…

Well, if you follow me on Twitter, you would’ve realized that I had been on a Tesla Motors Model S powered roadtrip from Southern California to the East Coast…

Starting tomorrow, 9am Pacific (12 noon Eastern, 5pm BST, 6pm CET), I will be releasing a post on what I call “pseudo-real-time” basis.

Basically, I had drafted a bunch of posts that are set to publish four weeks from the time that the actual day “happened”.

However, the focus of today’s post is the subject of what things did we do before we even rolled off from home to go East.

A few weeks prior to the start of the trip, we had Tesla give the car a look over and verify its “road worthiness”. The car was around 36,000 miles at the time and some of the tires may need to be replaced, so it was a good idea to have them check it out.

It turned out that one of the tires did need to be replaced (this is one of those things that Teslas do go through a lot (a lot more for 21″ wheels and P series Models S).)

So, we took the opportunity to do the thing that is an option for Single Drive Model S models.

2) We bought a spare wheel and tire. 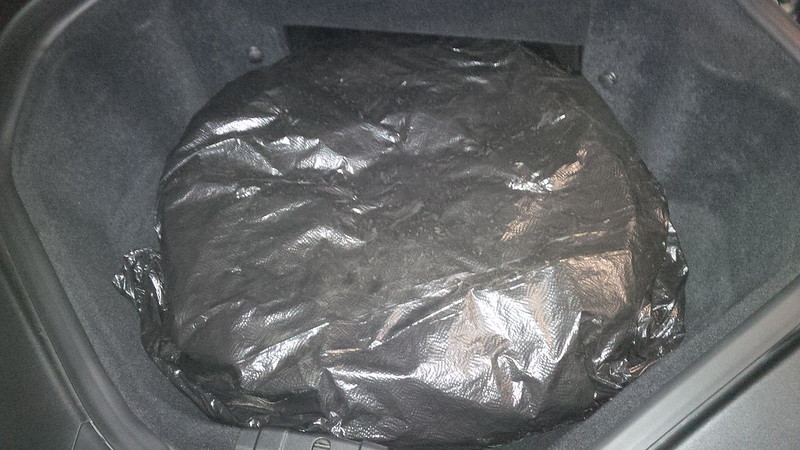 And put one of the “old tires” in the frunk. Basically, we replaced the one tire that needed to be replaced and had them install that in the rear. The OTHER rear tire is the brand new wheel and tire, and the remaining tire with good tread was moved in the frunk. The two front tires had good and even treadwear to each other, so the tires were “somewhat” balanced (in terms of treadwear, etc.) so we left those in place in the front.

The service center put the spare in a plastic bag to protect the frunk, but during our trip, and many a down-time at a supercharger, we found out that we could also pick up the very stylish Tesla Tire Tote

Even though Tesla has a “loaner” program for tires that could be deployed by its fleet of third-party tow trucks to a Tesla owner that is in “tire distress”, we’ve found that all the “loaners” could be all deployed in a high density area such as Southern California, nor did we trust that this program may be in place in long stretches of “somewhat Tesla rare” Wyoming or South Dakota. So, it was “insurance” for the trip and the future. Besides, a larger frunk is an advantage that Rear Wheel drive Model S has over our Dual Drive younger brethren.

5) Arranged for someone to check on the house.

6) Notified our neighbors to keep an eye on the house (and let them know that someone will be coming by sporadically.)

7) Book several hotels in advance so that one has a goal and lodging already set up.

We bought a CHAdeMO adapter, our JESLA (which we bought for the Roadster and Active E) but is basically a Model S Universal Mobile Connector with a J1772 head, instead of a Model S head. NEMA 6-50 adapter (because we have one) as well as spare NEMA 14-50 and NEMA 5-15 connectors.

Because you don’t want to have to stretch the connector like we did with our Active E, back when we first got it.

So, do yourself a favor and bring a LONG high gauge external extension cord.

(and here’s a picture with two extremes of “charging” L1 100 foot, 12 gauge extension cord (rated to 15Amps) and a L3 CHAdeMO adapter for the Model S) 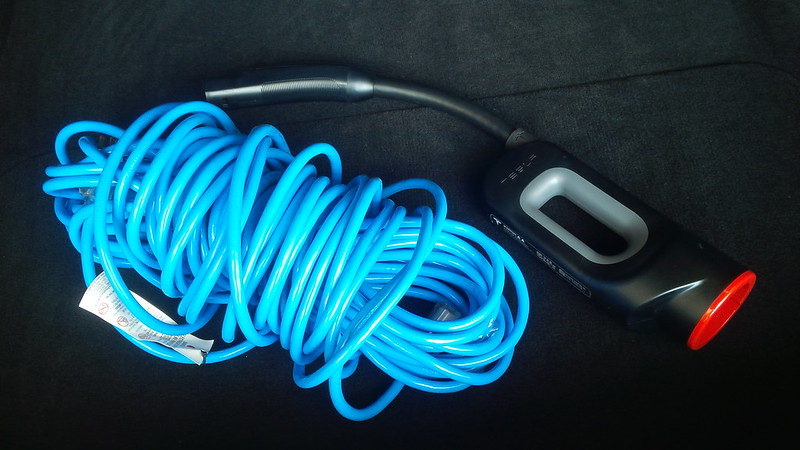 That’s it… We feel that we’re prepared and our daily posts from four weeks ago will start publishing starting tomorrow.

Go on to the first day of the trip.

2 thoughts on “Preparing for a cross-country EV trip”