A quick note of thanks to the Beatles for inspiring the title for this series of posts. This is the eleventh in a series of posts written about our trip that will be published four weeks to the day of the trip.

Today’s drive was going to be one of the shortest for the trip. But it also has the potential to go through some of the worst traffic of the trip. Our goal is to get from Northern New Jersey to my other cousin in Long Island. He lives near the Tesla Sales, Service Center, and Supercharger at Syosset, so another opportunity to write an entry for the beta of the (now released) Teslarati App for iOS.

Prior to making the plans to visit Long Island, I reached out to EV supporter and Science Fiction Author, Aaron Crocco (whose new book, Spirit Hackers is coming out soon (June 2015)) to see if he would like to meet in real life. It turns out that Aaron’s other job is close to the Syosset location and we arranged to meet during his lunch hour. That means that we needed to target being at the Syosset store around noon. The traffic to Long Island is a challenge because of its proximity to New York City. Traveling from Randolph, NJ to Syosset, NY could take a relatively short time or, conversely, an inordinate amount of time. So, we decided to plan for the latter.

It was a tough night trying to figure out what settings to do for the 110V charge at my cousin’s home in Randolph, NJ. After some fidgeting about, we finally landed on 6A. One of the strengths of Tesla (whether the Roadster or Model S) is its flexibility in handling lower amperage charging. The Model S gained the ability to automatically sense and adjust to a lower draw for “safety” reasons but always had the manual ability to be set to draw at a lower rate than what is automatically sensed by the car.

Soon after we plugged the car in last night, it sensed that the wiring at my cousin’s garage had to be adjusted to 9A from the expected 12A. Many factors add to this result, but from what I can tell, it seems that the spot in the garage is the furthest point from his main panel.

The car kept stopping charge at 9A, so I did the “old” tactic of fidgeting the Amperage to get the right fit. First step is to charge at half the rate to see if that works. So, I went to 6A, saw that it took, and went to sleep. 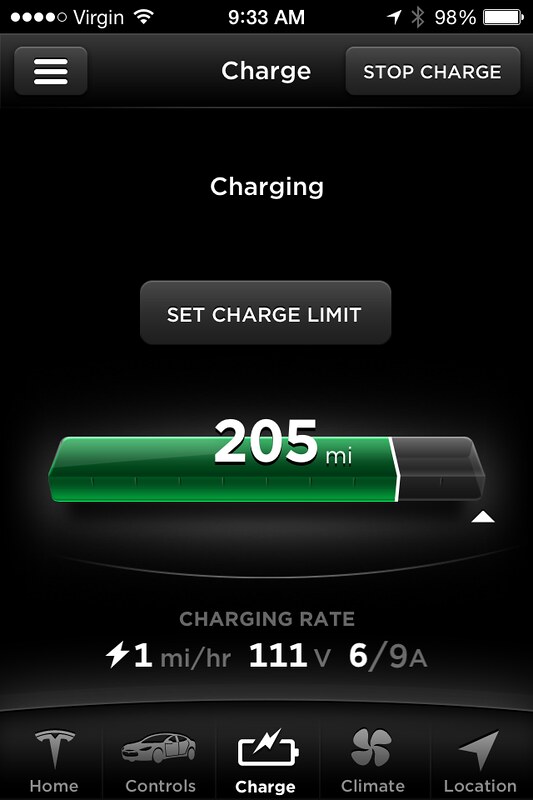 As you can see, we rolled out of their place gaining one mile per hour. The charge actually topped off at 206 miles, a gain of 17 miles. Seeing that I didn’t really need to charge, I just wanted to minimize losing miles due to vampire loss, I found this rate was adequate for the evening. Additionally, leaving the car plugged in at 110V gave us the option to run pre-conditioning without worrying about range loss as we cool the car before the drive, which I did to get us to 204 miles of rated range before the start of the day. Beside, there is something “cool” about having some “places I’ve charged” marked thousands of miles away from home.

So, we left New Jersey and headed to Long Island. We have to warn drivers that the routes to Long Island from New Jersey is expensive. The toll roads and bridge tolls to get from Point A to Point B may require that someone obtain some sort of financing to make that crossing. We went through 2 tolls that cost $22 one way. That could get expensive on a daily basis. 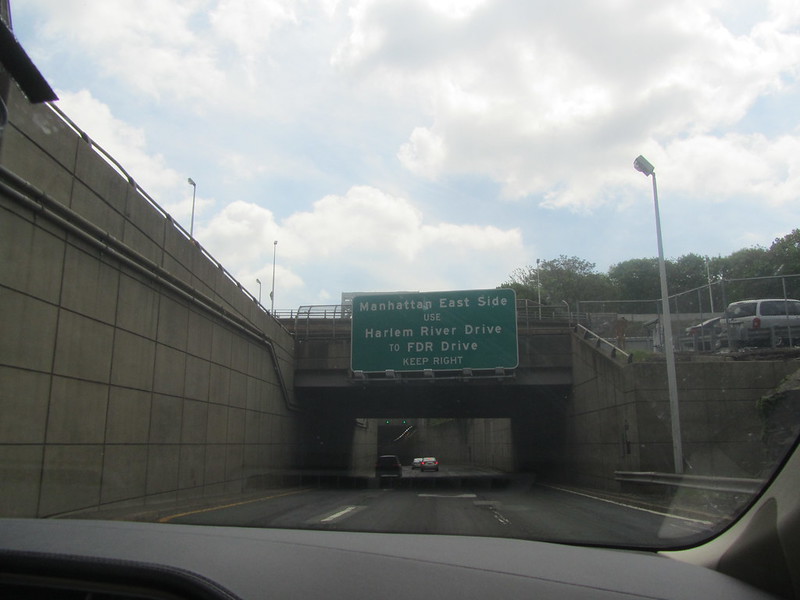 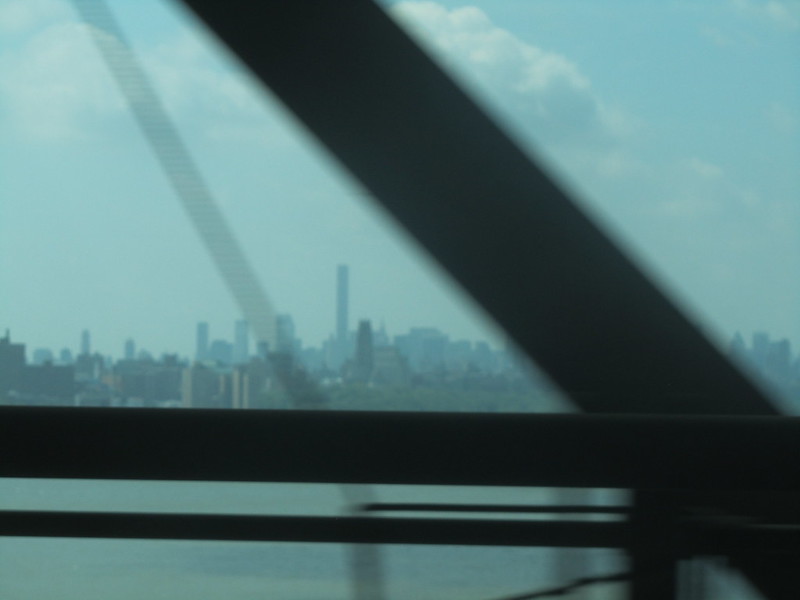 Crossing over the bridge to New York State from New Jersey. 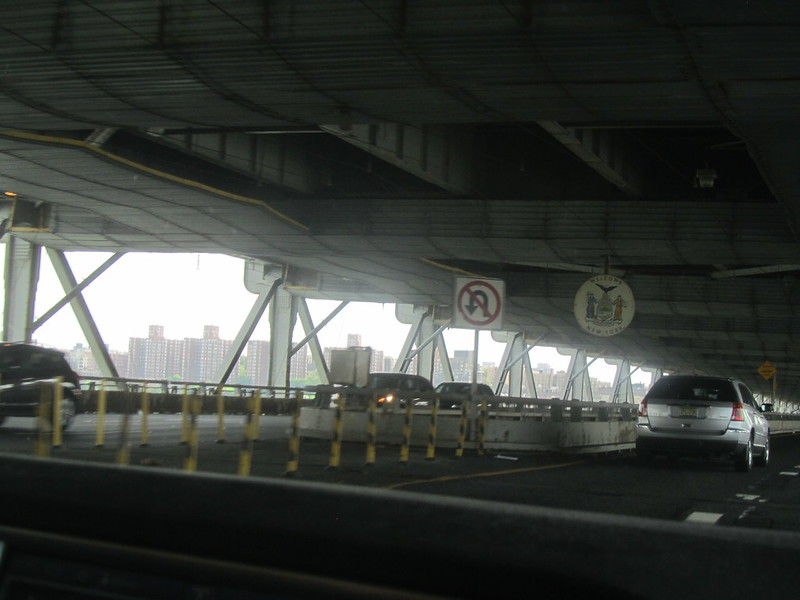 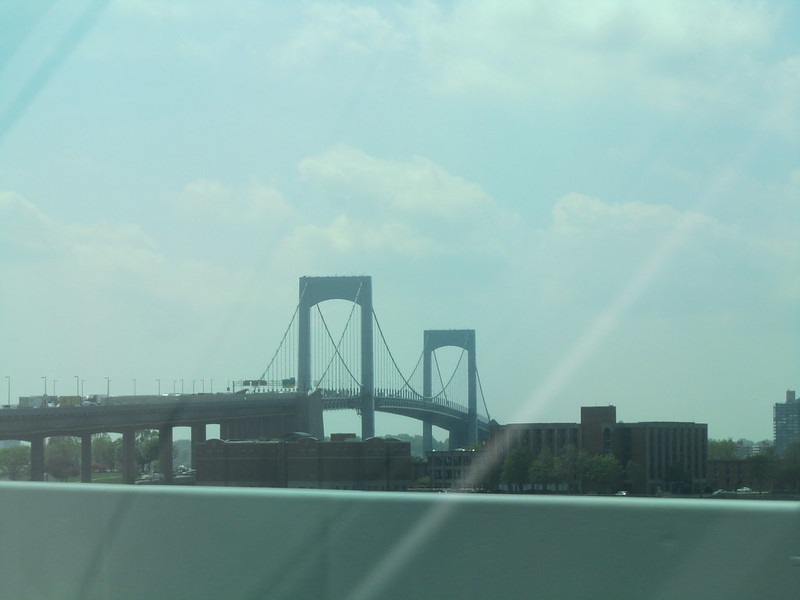 Decided not to “risk” our car in New York City traffic on this trip. That’s as close a view as we will get of “The City” on this trip. 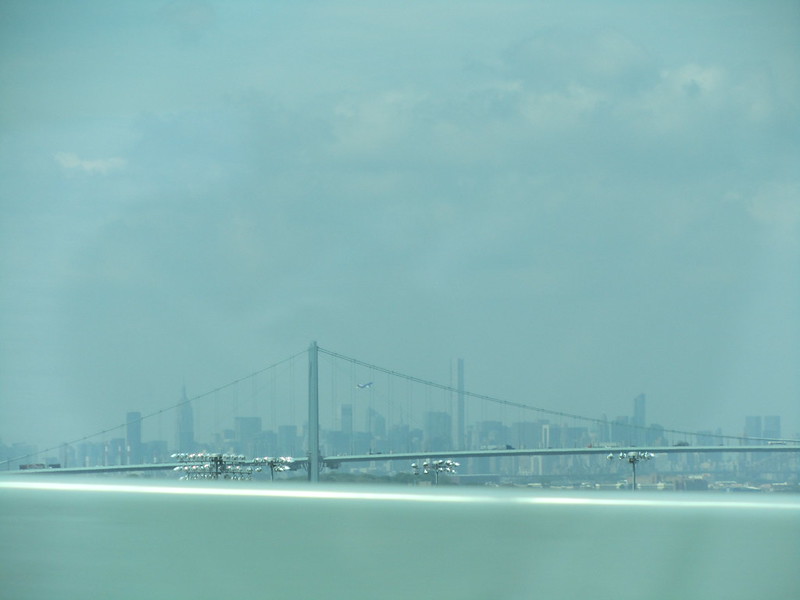 View from the passenger rear view. 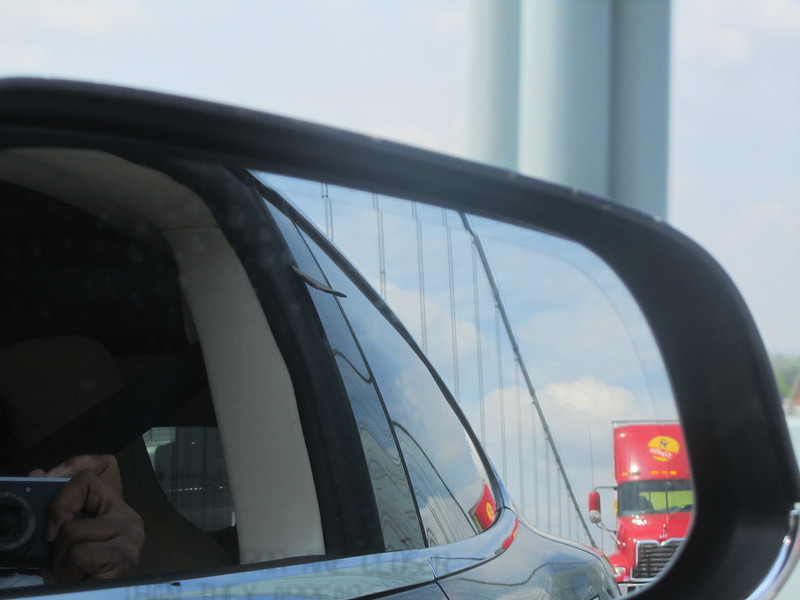 When we were on our way to Syosset, my wife noticed that the gasket on the passenger side was getting shredded. Though we didn’t take a picture of that particular instance, it was similar to the issue we had on the driver’s side at factory pickup (pictured below). 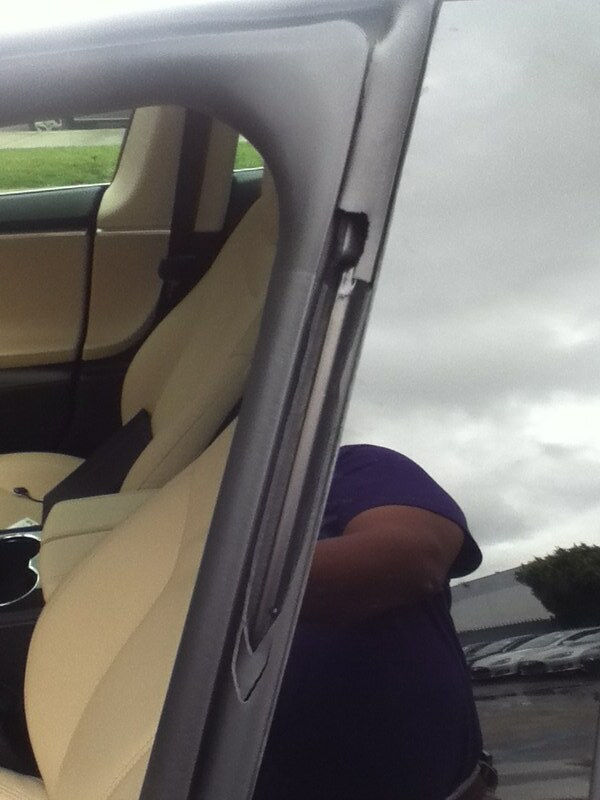 So, we made it a point to see if the Syosset Service Center can fit us in or provide us an appointment to have this taken care of.

We got to the Syosset Sales, Service, and Supercharger earlier than our meet with Aaron, so we figured to get a charge before we met with him. 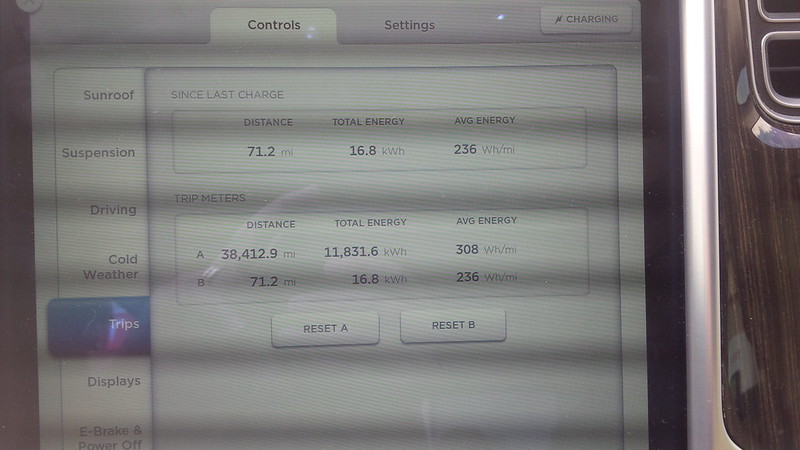 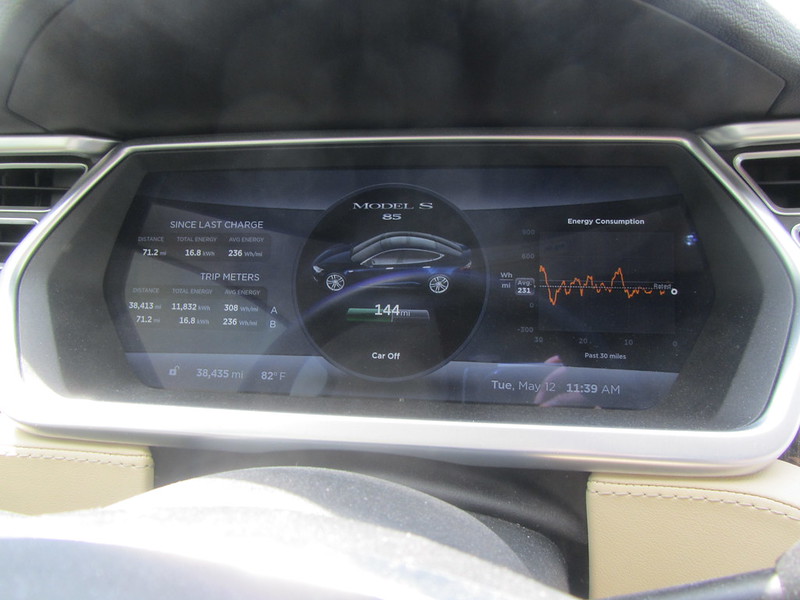 The center and supercharger parking lot was in extreme disrepair.

In fact, Tesla and/or their landlord was in the middle of repairing the entire parking lot and figured to have it completed by the May 17, 2015.

Before we saw the service center staff, we wanted to make sure that we had our car in our “possession” for meeting with Aaron Crocco.

One of the fun parts of the trip is we get to meet folks that we only know on the Internet in real life, so… 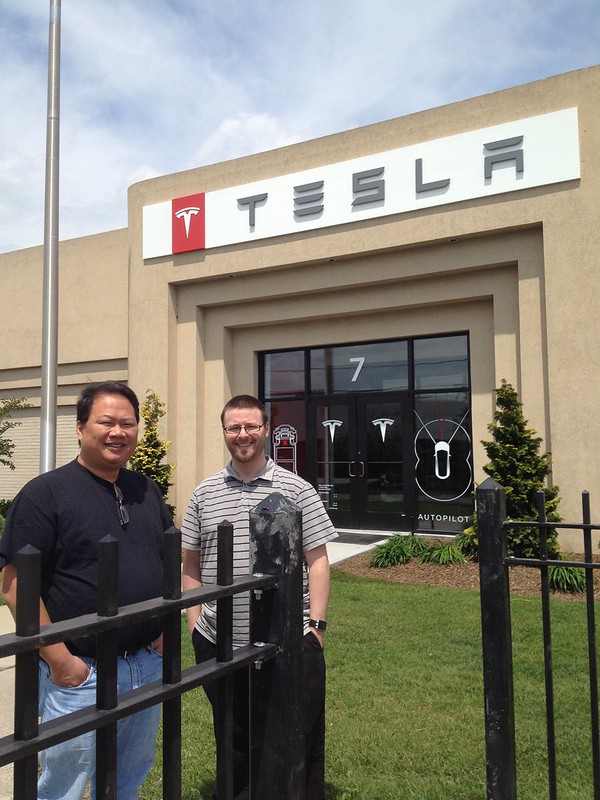 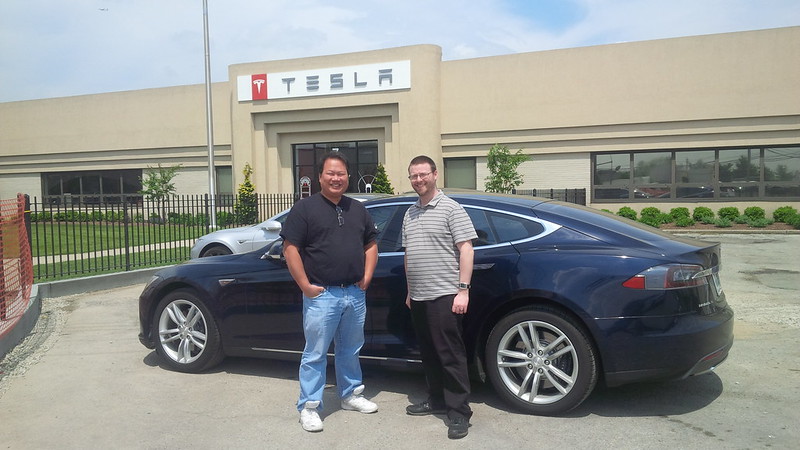 We took Aaron out on a spin in the Model S.

Big thanks to @dennis_p and his wife for showing off their @TeslaMotors Model S today. Super nice people and amazing car. WANT ONE!!!

Needless to say, we had fun with him.

After our meet-up, we figured to have the gasket thing “taken care off”.

We went in to speak with the service center. Unfortunately, like SoCal service centers they are pretty booked up. However, they were able to fit us in for an appointment tomorrow, and since we’re not on any schedule at this part of our trip, we accepted the appointment.

With that we headed off toward Nesconset. Now the navigation normally would route travelers between Syosset and Nesconset over I-495 (the Long Island Expressway). But, if you remember correctly, we decided earlier in the drive to sometimes choose alternate routes and get off the Interstate, and we were so close that we decided to take an alternate route to Nesconset. We decided to take the Northern State Parkway and meander to our destination.

Stopped off for some grub, and proceeded to Nesconset. 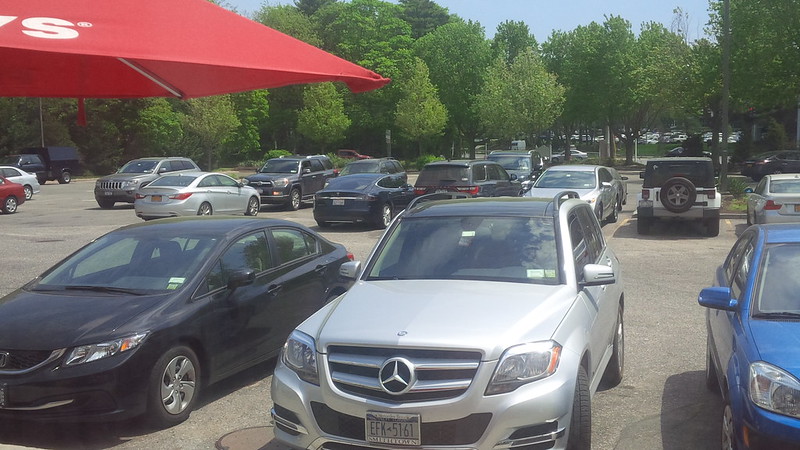 My cousin’s son had a baseball game at Baseball Heaven that afternoon and we spent the time with them.

In speaking with my cousin and his son, we found out that their school has been undefeated so far this baseball season. Now the pressure is on us. We didn’t want to be the “jinx” that brought about their first loss. 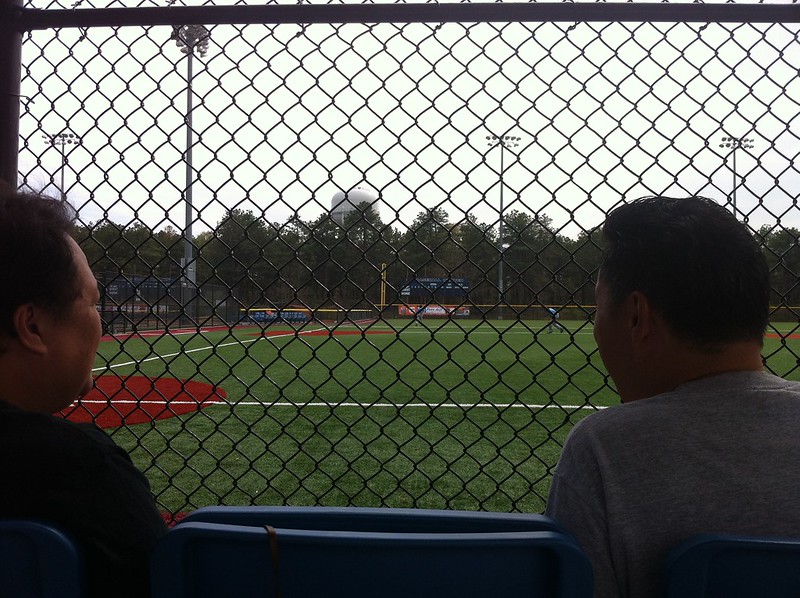 So, how did the game go? My cousin’s son did great (went 3 for 3, with a triple for one of those hits) but the team was behind all game Until he scored the run that tied the game (off that lead-off triple.) Aside from startin get the game in Second Base, he pitched in relief to get the win if they counted those things at this level of baseball. It would’ve been a long ride back home (all the way to California) if we had been the “jinx.” It was fun to watch a “Hollywood Ending” to a baseball game in Long Island, NY. 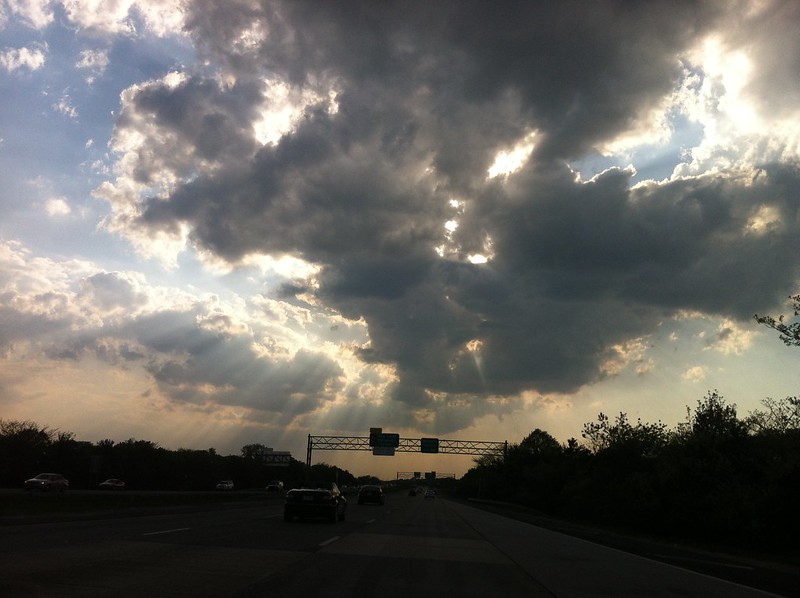 We had to drop off my cousin’s son’s friend home, so I had my cousin drive us back in the Model S. He was impressed.

We had another home cooked meal that was topped off with a second Banana Cake from the Brothers Bakery of Allwood. 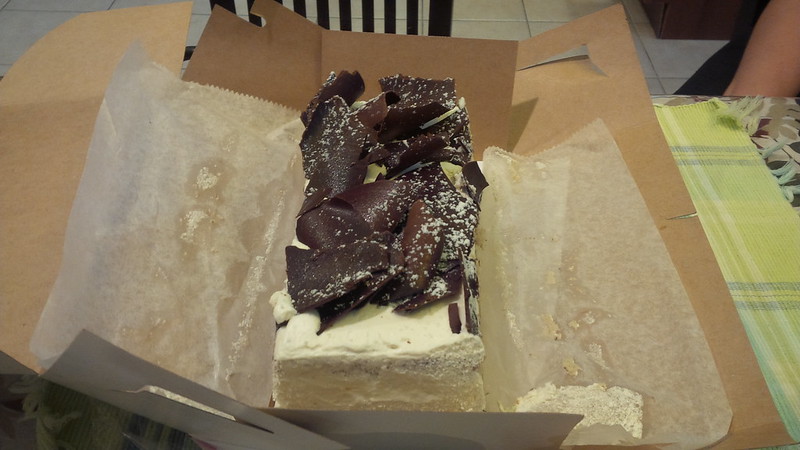 Since there was a little precipitation that evening and we were headed back to the Syosset Service Center the next day, we didn’t need to charge at his home and we turned in for the night. 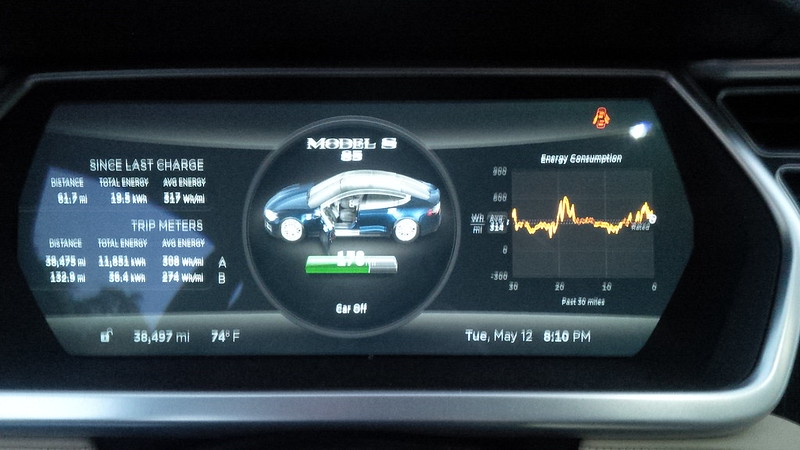 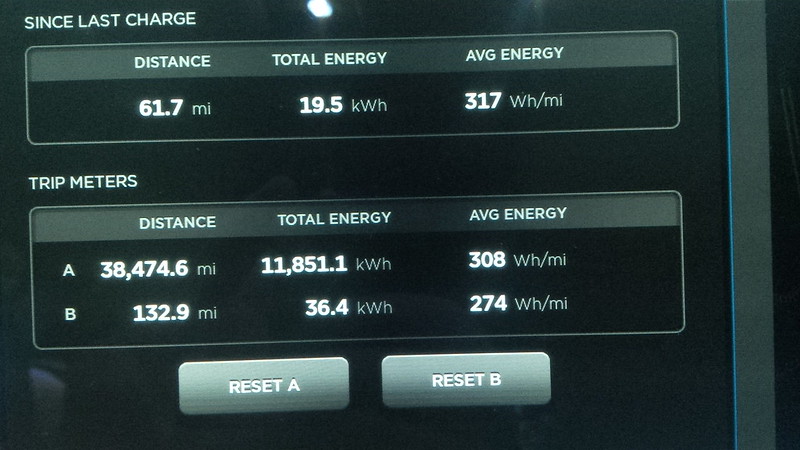 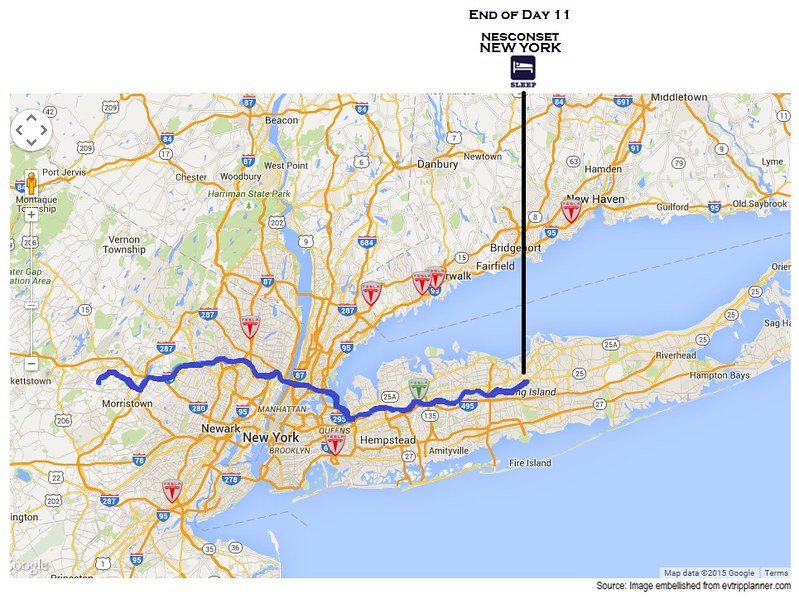