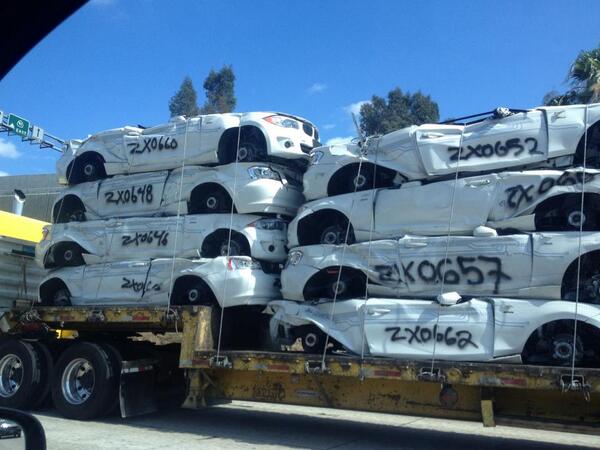 This picture was from the tweet from Chris Neff, owner unknown and uncredited.

Several tweets, pictures, and a post have come by recently that has confirmed what I’ve intellectually understood would happen, but refuse to accept.

Some lease end #BMW #ActiveE #EVs do not go to a happy place pic.twitter.com/nf5beh7qYH

I am crushed. At first glance, and following Airton’s tweet, I thought that the cars spotted were in NJ and I was saddened, but not crushed…

@cneff There's ours without the decals i bet 🙁

However, at further inspection, the freeway sign was for CA-91 and that is a freeway that I often cross in my many drives throughout Southern California. The reality is one of those cars could actually be “my” Active E. I had such high hopes when it was announced that another eighty ActiveEs were making the trek to Northern California to join DriveNow. Now, I suspected, and others have mentioned that perhaps the spraypaint on the side refers to particular VIN numbers… If that’s the case, I can still hope that my car is in the Bay Area.

Furthermore, I am extremely sad at these pictures, but thankful that the Active E has made me Accidentally Environmental. I didn’t care about climate change before my Active E. I wasn’t denying it’s existence, just not really doing anything about it. And now… I do a little bit more.

Alas, these pictures bring me back to a jarring reality.

I am, metaphorically, crushed.

One thought on “Crushed…”