Well, I got the following in the mail the other day… 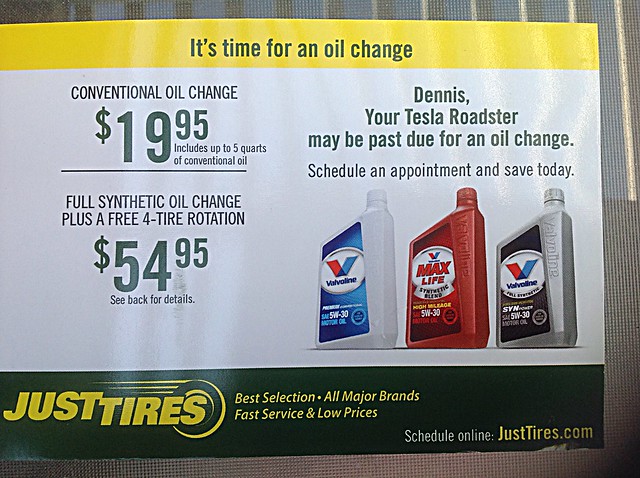 I guess having work done at non-Tesla locations subject one to some really interesting car offers.

A few months back, we found a nail in the Roadster’s tire. The tread was still good, and the leak was slow, so we had the tire patched at Just Tires.

This was an interesting repair because, the Roadster did not have a standard location to jack the car up to get the tire removed, so Just Tires refused to do the work… Initially.

So, I called the nearest Tesla Service Center (which was less than 2 miles from the Just Tires) and requested them to remove the tire, instead of doing it at their location, Tesla sent a Ranger to the Just Tires parking lot and removed the tire, waited for the repair to be done, and re-mounted the tire back on the Roadster. That’s the sort of service that’s somewhat screwy, but above and beyond. Tesla refuses to patch the tires, but understand that customers may opt to do this anyway (within reason) and the service center staff are reasonable enough to adjust and have workarounds that they help with.

Needless to say, I was happy with the work from Tesla.

Just Tires did a great job with the patch. They also patched the Model S a few months ago when I got a similar road debris issue with the Model S.

I think that Just Tires does have to figure out how to make their CRM system understand the needs of electric vehicle drivers may not be the same as internal combustion engine drivers.